Akara ready for a fight
Business

Akara ready for a fight

Miner urges review of cabinet resolution which threatens its existence

The Akara operations are huge, open-pit facilities such as this Chatree mining complex, straddling the borders of Phichit, Phitsanulok and Phetchabun provinces, which has sparked many local complaints over the years. (Photo by Pornprom Satrabhaya)

Akara Resources Plc, a gold mining operator in Phichit, has called on the government to review its cabinet resolution on May 10 that resolved not to renew or issue new gold mining licences, which could lead to the mine's operations being suspended nationwide by the end of this year.

Interviewed by the Bangkok Post at the gold mining site in Phichit's Thap Khlo district, Cherdsak Utha-aroon, the company's external affairs manager, said the company will fight to the end to defend its authority.

"We would like the government to review this cabinet resolution and we hope it will do so,'' he said.

Mr Cherdsak said he was surprised the cabinet adopted the resolution given a panel set up by the Ministry of Industry has yet to complete its investigation into pollution and health complaints.

The panel, made up of state agencies, affected villagers, university academics, environmentalists and Akara representatives, was established last year after the Ministry of Industry received pollution and health complaints from villagers.

They claimed their health was harmed by Akara Resources' gold mining operation in Phichit.

The panel is also required to propose solutions that will help end conflicts between locals and the company.

"We are waiting for the time when the panel discloses the findings, which should be based on scientific information. We are confident it will be able to present the facts to the public,'' he said.

He said the cabinet made a hasty decision as the panel is still studying the impacts of the mine. 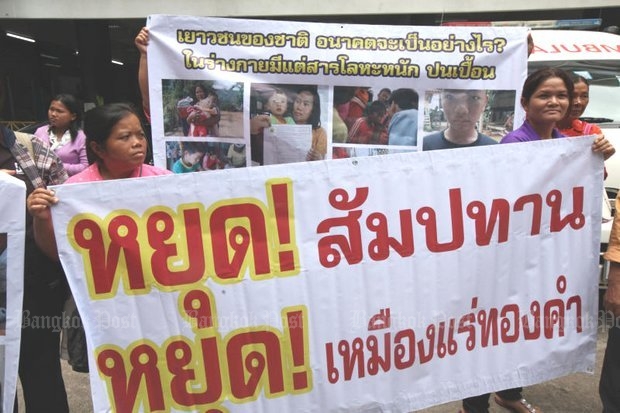 People in the regions of Akara mines have been campaigning for several years to close the facilities, claiming the gold-mining operations have made them ill. (File photo)

There is as yet no conclusive link between the heavy metals and illnesses claimed by some villagers. The panel is also involved in further studies to see whether the gold mining site is a source of heavy metals, he said.

Mr Cherdsak said the cabinet resolution has destroyed foreign investor confidence and affected local workers and their families who depend on the company.

He said 90% of local workers live near the gold mining site and still want to work with the company.

He insisted there is no contamination of arsenic in the water as claimed by some villagers, though a high level of manganese was found in underground water in certain samples.

However, high levels of manganese have been detected in many areas nationwide even though they are not located near gold mining sites, he added.

Regarding locals' complaints they are falling ill, he said no medical conclusion has yet been made to link the deteriorated health with a high contamination of heavy metals such as arsenic and manganese.

Mr Cherdsak said the cabinet's unexpected decision not to renew the mining licence will also pose a problem for mining rehabilitation activities being carried out by the company.

He said the company has planted trees and filled some holes at the site. He added full rehabilitation is expected to be completed at least five years after the mining concession expires in 2028.

Workers at Akara Resources Plc's gold mining site in Phichit have also called on the government to review the cabinet resolution.

They told the Bangkok Post the resolution will make their lives difficult as they will lose secure jobs which they have worked in for more than a decade.

They said it is not only affecting themselves but also their family members. About 1,000 people are now working at the site.

"I will have to go back to do farm work if the mine really closes. I want the government to review the decision immediately," said Komsan Kwankaew, 43.

Mr Komsan has worked with Akara Resources Plc since the company began its mining operation in 2001 Phichit's Thap Khlo district.

He said he was surprised the government took such a step given the company has created job opportunities for many people in Phichit and surrounding provinces.

He said the company has provided a good quality of living for people in communities near and around the gold mining site.

Many youngsters in the area were born to poor families but the company supported them to study at an advanced level.

Another worker, Amornkarn Naosang, 40, said workers will suffer if the company is forced to close its mine in Phichit by the year's end.

Ms Amornkarn said she has no plans to find a new job and is not sure exactly what her next steps are given the current uncertainty.

Vendors at the site, in addition to company workers, will also be affected.

Kuljira Petpak, a 49-year-old vendor, said she earns over 30,000 baht per month. If the company really has to close down the gold mining site, who will be her customers?

Bangearn Kwanjairuk, deputy chairman of the Phichit Chamber of Commerce, said the mine has played a key role in helping boost the province's economic growth with tax revenue to the province amounting to 500 million baht a year.

Ms Bangearn said it is impossible the Ministry of Labour will be able to find replacement jobs for all mining employees as this is a unique skill-set. If the mine closes, communities nearby will collapse economically.

A source from the company said locals who support the mine will ask the government to hold a referendum for those living near the site on whether they want to keep the gold mining operation. They hope to schedule it for October.

Since Akara Resources Plc began operations in 2001, it has made over 39 billion baht in income for the country, including 1.96 billion paid to the government as a concession fee, with production of 6.2 million tonnes of gold a year, the source said.

On Friday, a 500-million baht lawsuit was filed against Akara Resources by about 300 Phetchabun and Phichit residents over the health, environmental and resource impacts stemming from its gold mining operation.

The Lawyers Council of Thailand brought some 30 residents representing the plaintiffs' group to the Civil Court in Bangkok. 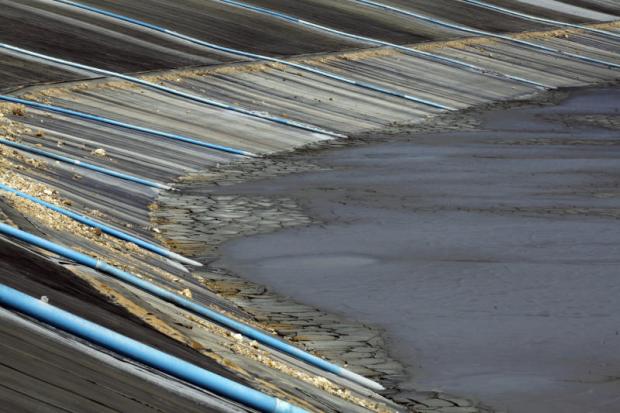 Gangue, the mineral left over after the gold separation processes, is piped into a pond where chemical contaminants in the material will be destroyed by sunlight.