Thai and Chinese officers take part in the opening ceremonies for the recent Blue Strike 2016 joint exercises at the Sattahip naval base in Chon Buri. (File photo)

Thai military rule may complicate and weaken Asean's position in the international security setting, but the gestures made to date by the junta should not be seen as a shift from the western-allied camp to China, analysts caution.

Security experts have been debating Thailand's intentions ever since the military took power just over two years ago. International media reports, meanwhile, tend to frame every move in Southeast Asia in the context of the tense relationship between Washington and Beijing, and to a lesser extent with Moscow. Such reports invariably focus on US disapproval of the military coup and how that might be driving Thailand into the embrace of countries that don't place much of a premium on democracy.

"Such a notion is reinforced by the weapons orders the government leaders have signed with China and Russia and the attitudes expressed in speeches by Gen Prayut Chan-o-cha and Gen Prawit Wongsuwan to the media," said Surachart Bamrungsuk, a professor of political science at Chulalongkorn University, referring to the country's prime minister and his deputy.

Frequent exchanges of high-level visits between Thailand and the two countries have also reinforced the impression, said Mr Surachart.

But Tim Huxley, the executive director for Asia with the International Institute for Strategic Studies, said such conclusions may not be warranted.

"Every country in the region really needs to have good, strong relations with China. Perhaps it's just a nuance in foreign policy overtures but not a shift," he said.

Mr Surachart argued that the closer cooperation the junta has built with China and Russia could have long-term consequences in the form of a budget burden for future governments. "It's not rebalancing as some [junta] advisers would like to claim -- rather, it's just about being their allies," he said.

Thailand still takes part in the annual Cobra Gold military exercises with the United States, though they were scaled back this year. Meanwhile, the Blue Strike 2016 exercises with China this month appear to have taken on added significance. That led Mr Surachart to also wonder what might come next in terms of Thailand-Russia military ties.

In the past, he said, Thailand tried to strike a balance between major powers but "now we are tilted toward one side".

However, he acknowledged the difficulties that both Thailand and the US are facing when it comes to formulating constructive new policy gestures during a transition period -- in Thailand before elections and the US until a new president is chosen.

A Thai military officer conceded that the junta perhaps had tried to "prove themselves too much", realising that since the military regime was not a legitimate administration, it needed to befriend "other" heavyweights.

"Who will want tanks and helicopters? Not to mention the submarines in a shallow Gulf of Thailand," said the major general who asked not to be named. 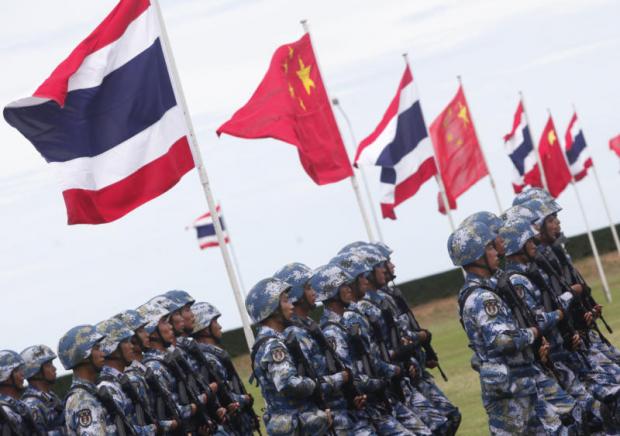 Thai and Chinese officers take part in the opening ceremonies for the recent Blue Strike 2016 joint exercises at the Sattahip naval base in Chon Buri.

After all, the officer said, Thailand's military establishment remains connected to and deeply rooted in American expertise.

"China can only use soft power, but the real power remains the US," he said, dismissing overtures in the past two years as a childish reaction.

Arms purchases from new sources have also complicated the maintenance budget of the military as the real burden will be more than double the purchase price over the lifespan of the equipment, the officer said.

Even having weapons factories invested in by China or Russia should not be considered as welcoming by Asean neighbours. "Who are you going to wage war with" asked the general rhetorically.

Seemingly more intimate ties between the junta and Beijing have not yielded the positive results both sides wished to see in some cases. A much-hyped high-speed rail link remains stalled as Thailand has rejected Chinese requests for rights to develop some of the land along the route. Chinese financing terms have also been rejected, and now Thailand will have to invest itself in a route half as long as what had been planned.

Yun Sun, senior associate with the Henry L Stimson Centre, pointed out that while China always wants better relations with all countries, it doesn't compromise on economic benefits for itself.

"If they offer Thailand an interest rate lower than 2.5% [on financing for the railway], it will be a bad investment. So they won't give up everything else but always will do the cost-benefit calculation," said the Washington-based analyst.

But China, she added, did offer comfort and convenience for any government -- be it democratic or tyrannical. Myanmar in the past was one example.

Mr Huxley, however, noted that China has also used economic influence with European countries and even Australia -- a close ally of US -- to ensure they would remain "neutral" and reluctant to directly oppose China, for example in maritime disputes with neighbours.

Mr Huxley said China's arrival as a strategic player in maritime security has caused ripples in the region. While some countries are happy with China's rise because of the economic benefits, others including Japan and Korea are concerned about the security implications.

However, the security analyst did not buy the notion that the Obama administration's rebalancing act has provoked China; rather, he saw re-engagement of the US in Southeast Asia a reactive move in the face of China's increasing militarisation.

Mr Huxley remained optimistic that there were only "some small quarters in the US" disturbed by "Sino-Thai intimacy".

"The reality is Thai-US relations are much stronger and more long-lasting. Cobra Gold is after all the American biggest exercise in Asia -- though in practice it has been scaled down in the past two years as Thailand having a military government," said the IISS-Asia executive director.

The greater financial influence of China --through the new Asian Infrastructure Investment Bank for example -- may encourage smaller countries to show more respect toward Beijing politically and diplomatically in order to protect their economic interests, he conceded.

Mr Huxley shared the view of both Thai analysts that Russia's presence in Thailand and the region was not a key concern. "Moscow is not really a strategic player in the region."

Therefore the concern about Thai-US relations, he said, was that while western nations may be uncomfortable with aspects of military rule, they would look more objectively on the region and would try to work with Thailand.

Kevin Hewison, the Weldon E Thornton Distinguished Professor of Asian Studies (Emeritus) at the University of North Carolina at Chapel Hill, said "cultural" factors might be why the Thai military junta has difficulty dealing with the US and EU.

"There is almost a 'cultural' difference, which makes the hierarchical and dictatorial regime in Thailand uncomfortable in relations with countries that ask questions about governance and human rights," said Mr Hewison.

"Culturally and, hence, politically, the junta seems more at ease in dealing with culturally similar regimes. That is, with authoritarian and hierarchical regimes like Russia and China."

The military and government leadership, he said, were unlike the earlier generation of military leaders who were "trained" through the range of networking opportunities created by courses developed to bring the military together with business and bureaucratic elites in the western sphere.

Recent decisions by President Barack Obama and US Secretary of State John Kerry to visit and deal with Myanmar and Vietnam (skipping Thailand) have sent a clear message to the junta that Thailand is seen as unreliable, in Mr Hewison's view.

"The junta seems to have thought that being seen to get cosy with China and Russia would bring the US and EU back to Thailand. The US is saying and showing that it would rather deal with others -- the Philippines, Singapore, Vietnam and Myanmar. Thailand is being left out and isolated," said the US-based scholar.

US relations with Thailand have a long history, and have withstood a lot of geopolitical changes, she noted.

"Thailand is not directly involved in the South China Sea, so I would not draw a causality between Thailand's warming ties with China and US engagement with other Southeast Asian countries," she said.

On maritime issues, the lifting of the arms embargo on Vietnam was not going to immediately change the status quo in the South China Sea, said Ms Sun.

"But the implications and potential are significant. What China fears most is US direct involvement. That has not come today, but US involvement is certainly growing in the region," she said.

Ms Sun concluded that China in the current setting was certainly the nation most affected in the changing equation -- which cannot help but result in warming ties between the US and Vietnam and Myanmar.

"China seeks to discount the warming relations. In the case of Vietnam, it keeps reminding Hanoi of the party-to-party solidarity and of the United States' desire to stir up 'peaceful evolution' to change Vietnam's political system," she said.

"In Myanmar, China discounts the US friendliness as 'lip service' because the sanctions prohibit major American investment, which Myanmar needs to jumpstart its economy."

China, noted Ms Sun, was after all uncomfortable with US pushing into what China perceives to be its own sphere of influence. The competition will continue into the future, she concluded.