Thousands of followers meditate at Wat Phra Dhammakaya in Pathum Thani province on Monday as their spokesman says they start to get angry with actions against their abbot Phra Dhammajayo. (Photo by Pongpat Wongyala)

Thousands of Wat Dhammakaya followers in and outside the country have become increasingly frustrated with the way the abbot is being treated and the monastery is beginning to worry it might not be able to keep them in line, their spokesperson said.

Meanwhile, Prime Minister Prayut Chan-o-cha admitted concerns about possible clashes were delaying the arrest of Phra Dhammajayo but he warned the followers not to use a mob to block the judicial process.

Ong-art Thamnitha, spokesman of Phra Dhammajayo's followers, told the press on Monday that the abbot remained seriously ill and followers in the country and elsewhere started to be frustrated with actions against the innocent abbot.

The temple's management was afraid that it might be unable to control the crowds and thousands of them wanted to gather at the temple, he said.

However, he said that the followers who were gathering there now were praticising dhamma. Mr Ong-art insisted that Phra Dhammajayo remained at the temple in Pathum Thani province.

About 3,000 followers, mostly women and the elderly, practised meditation at the temple on Monday.

Prime Minister Prayut said on Monday that Buddhists should carefully consider facts in the case and should not think anyone was being treated unfairly.

The case started from embezzlement at the Klongchan Credit Union Cooperative and people involved must enter the justice system, he said.

Gen Prayut admitted he was concerned about possible confrontation of people, saying that was why he had not exercised his power to deal with it. However, he warned concerned parties not to use masses against the justice system.

Deputy Prime Minister Wissanu Krea-ngam said on Monday that authorities had to take action against the abbot accused of laundering money and receiving stolen property and the suspect should tell authorities whether he had done anything wrong.

Hiding only raises suspicion and authorities have the legal power to cope with the tactic, he said.

Justice Minister Paiboon Koomchaya said authorities could not spare the abbot because they would have to also spare 10-20 other people involved in the embezzlement case. That would pose a law-enforcement problem, he said.

The accused could defend themselves with interrogators, then public prosecutors and the court, Gen Paiboon said.

Pol Col Paisit Wongmuang, director-general of the Department of Special Investigation, said the DSI had its course of actions related to the warrant for the arrest of Phra Dhammajayo and sought a police helicopter to inspect the temple covering thousands of rai of land.

He confirmed that his department would be cautious before taking any action.

The 72-year-old abbot faced the arrest warrant for repeatedly failing to meet the DSI to acknowledge the charges.

Phra Dhammajayo is wanted on an arrest warrant approved by the Criminal Court on charges of money-laundering and receiving stolen property worth 1.2 billion baht in connection with the 12-billion-baht Klongchan Credit Union Cooperative embezzlement case. He has denied knowing that the funds he received were stolen.

Supachai Srisuppa-aksorn, former chair of the cooperative and treasurer of his temple, is at the centre of the case. He is now serving a 16-year jail term. 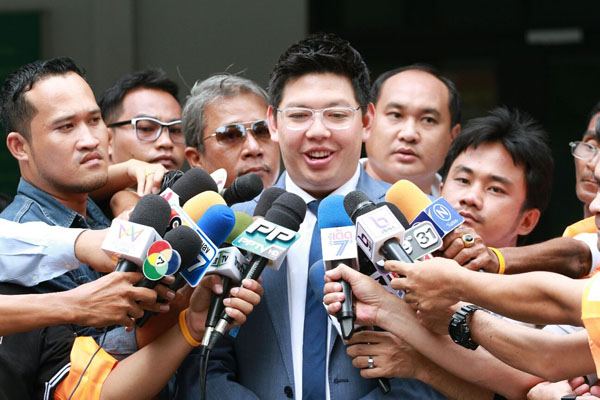