Staff from the Department of National Parks, Wildlife and Plant Conservation continued to catch tigers at the Tiger Temple in Kanchanaburi province on Tuesday. (Photo by Piyarach Chongcharoen)

KANCHANABURI -- Wildlife authorities drafted veterinarians and staffers from across the country on Tuesday to help them continue relocating dozens of big cats from the Tiger Temple, including one that briefly escaped.

After the escape episode, Adisorn Noochdumrong, deputy director-general of the Department of National Parks, Wildlife and Plant Conservation (DNP) instructed authorities to erect a sign outside the Tiger Temple to prohibit visitors from monitoring the efforts to remove the big cats, "to ensure their safety".

Thirty-three more tigers were caged and removed from at Wat Pa Luangta Maha Bua Yannasampanno on Tuesday as wildlife department officials and tourist police explained to visitors, mostly foreigners, why the popular tourist attraction was closed.

Officials moved seven tigers from the temple on Monday. About 97 remain. Officials expect the transfer will be finished in a week.

About 30 temple tiger tamers observed Tuesday's operations, vowing to remain until the last big cat was taken. Their help and more was needed, however, after the discovery that one of the tigers had escaped confinement on the grounds.

The DNP mobilised employees and about 400 local police and administrators at the Saiyok district monastery.

Siri Akkha-ak, a wildfire-control director, encountered a loose tiger in the temple while on patrol around 3am. The tiger disappeared into the dark and a search party was dispatched. After an hour it was seen chasing a baby boar near the entrance of the temple. A veterinarian shot the animal with a sedative and it was caged. 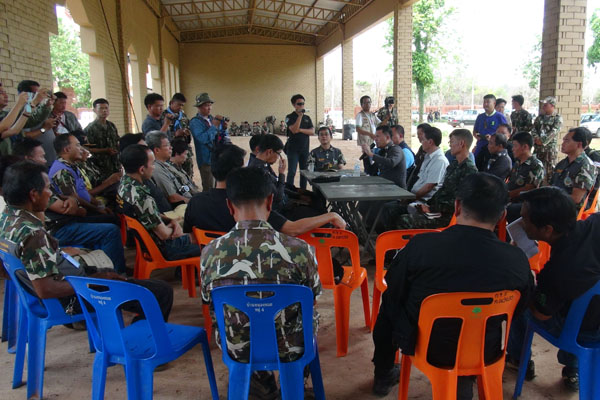 Wildlife staff are mobilised at the Tiger Temple to prevent any loose tiger on Tuesday. (Photo by Piyarach Chongcharoen)

Wat Pa Luangta Bua was established about two decades ago as a forest temple and a sanctuary for wild animals. Tigers have been the highlight and attracted a large number of visitors, but in the past decade the temple was accused of being involved in illegal wildlife trading as some of its tigers disappeared.

The group People for the Ethical Treatment of Animals said the temple was "hell for animals", which spent much of their lives in cement cells.

"The tigers ... should be transferred to suitable sanctuaries and facilities that can offer them a better life," the group said in its statement.