As the relocation of Bengal tigers from the Tiger Temple in Kanchanaburi continues, wildlife authorities on Thursday discovered the carcasses of 30 more tiger cubs, two tiger pelts and a large number of talismans made from tiger carcasses.

The findings came one day after authorities found the carcasses of 40 tiger cubs in a freezer at Wat Pa Luang Ta Maha Bua in Sai Yok district, the infamous temple that has been a popular stop for tourists who pay a steep fee to pet the predators.

Animals rights groups and conservationists have long accused the temple of secretly acting as a tiger farm and making huge profits by selling animals and tiger parts on the black market.

Repeated efforts to shut down the temple have been delayed and complicated by the fact that secular Thai authorities are often reluctant to intervene in the affairs of the clergy. 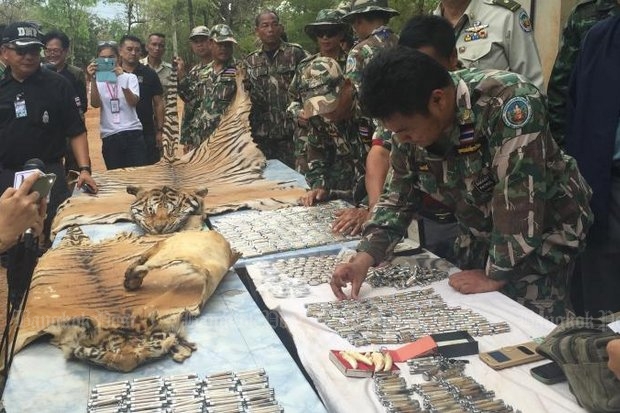 These products were found in a pickup truck that was about to leave the temple Thursday afternoon, police said, adding that more similar items were found during additional searches.

Two laymen and a monk were in the truck when authorities spotted it leaving the temple, police said.

The two men were later identified as Kongkiat Chanpheng, 37, and Net Kulruangklai, 42, both residents of Sai Yok district, while the monk remained unnamed, police said.

Tuanjai Noochdamrong, director of the Wildlife Conservation Office, under the Department of National Parks, Wildlife and Plant Conservation, said the office initially filed charges of illegal possession of carcasses of protected wild animals against the temple.

Police were investigating why the wild animal carcasses had been stored at the temple and if they were intended for illegal trade, said Ms Tuanjai.

The carcass of a tiger aged between one to two months is normally worth 100,000 baht in some countries where it is turned into talismans or used in Chinese traditional medicine, she said. 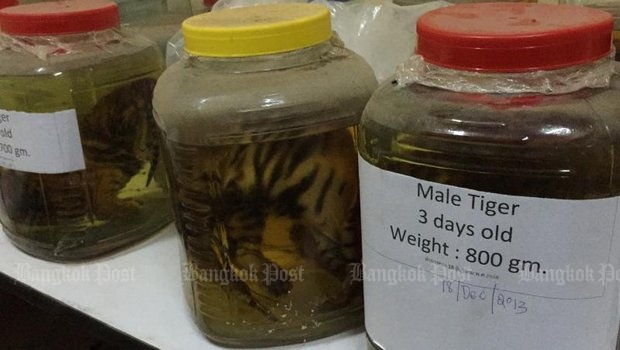 Another 30 preserved carcasses of tiger cubs were found on Thursday, labelled in English and possibly for sale. Forty dead cubs were found Wednesday in a freezer in the kitchen of Wat Pa Luang Ta Maha Bua, known as the Tiger Temple.

Some of the people at the temple insisted they had nothing to do with the tiger cub carcasses, she said.

More than 20 tiger cubs, aged between one to two months, that had previously been used to attract tourists to the temple had disappeared, she said, adding that security officials continue to search for them.

As of Thursday, the team handling the relocation of the remaining 137 Bengal tigers had successfully transferred 64.

The team expects to complete all the transfers by tomorrow.

Aside from the tigers, the team also found one Banteng and pieces of illegal timber, some of which was believed to be the protected Afzelia xylocarpa variety while the rest awaits examination to find out what type of wood it is.

An unnamed source at the Wat Pa Luang Ta Maha Bua Foundation said that about 40 tiger cub carcasses were found in the office of a veterinarian who used to work for the temple.

The same source revealed that there are some photos showing the veterinarian storing tiger cubs in large glass jars.

In the pictures, an unidentified monk was seen watching the veterinarian work, said the source.

Chaloemkiat Sriworakhan, deputy national police chief, said representatives of the department had already lodged a complaint with Sai Yok police asking them to press charges against the suspects behind the illegal possession of the animal carcasses.

Police were looking for the motive for storing the carcasses at the temple, Pol Gen Chaloemkiat said.