UDD heavyweights Jatuporn Prompan (speaking) and former leader Thida Tawornseth are moving the United Front for Democracy against Dictatorship back into the political spotlight. (Photo by Pornprom Satrabhaya)

The military regime is seeking to take legal action against the United Front for Democracy against Dictatorship (UDD) for possible breach of the regime's orders following the group's launch of a centre to monitor fraud in the Aug 7 referendum on the draft constitution.

The centre was launched on Sunday at the Imperial World Lat Phrao department store, attended by core members including Jatuporn Prompan, Nattawut Saikuar and Tida Tawornseth.

Prime Minister Prayut Chan-o-cha on Monday slammed the UDD's launch of the centre.

"Let them open it, but I don't accept it as a legal entity. It will not have any legal status. The centre must not violate the Referendum Act, otherwise all concerned will be arrested," the prime minister warned.

"Don't intrude at the polling stations. Don't ever say anything about derailing the referendum, otherwise you'll be arrested."

The prime minister questioned why the UDD did not set up such a centre to monitor corruption in the rice-pledging scheme introduced by Yingluck Shinawatra's government.

"The centre itself must be careful. Why was a centre like this not set up when the rice-pledging scheme was launched and was plagued with corruption?" Gen Prayut asked.

A source at the National Council for Peace and Order (NCPO) said the launch of the centre is believed to have political implications and those involved in the launch are political stakeholders who were previously involved in political conflict and still continue to cause political unrest.

The source also said such a centre is unnecessary because the Election Commission (EC) is already entrusted to hold the referendum and ensure that it is free of fraud.

The source said the NCPO's legal team is examining whether those involved in the launch of the centre have violated the NCPO's 3/2015 order which is intended to deal with people suspected of trying to spark political and social unrest.

The team is also looking into whether they have broken the conditions of their release from detention shortly after the May 22, 2014 coup under the NCPO's 39/2014 announcement.

Nisit Sinthuprai, a former Pheu Thai Party MP and a red-shirt leader in the Northeast, insisted Monday the launch of the centre is in line with the law, saying the centre aims to encourage as many voters as possible to exercise their voting rights in the referendum and help monitor any violation of the referendum law.

The centre has asked the EC's provincial branches, provincial governors and district chiefs nationwide to work with it to ensure transparency in the referendum, Mr Nisit said, adding that the centre now has volunteers from several provinces nationwide except in the South.

Mr Nisit said the government has mobilised state resources and personnel to support the referendum by deploying 15 teachers and 10 local governing officials at each polling station. 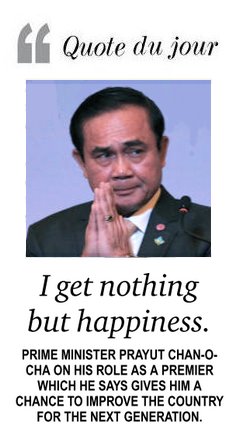 The UDD, therefore, also wanted to ensure the referendum is free and fair by asking at least 10 volunteers, along with a lawyer, to observe at each polling station.

"It is good to invite people to keep an eye out for fraud in the referendum. The government should not be suspicious and should help the work of the centre," Mr Nisit said.

Pol Sen Sgt Maj Pichit Tamoon, a leader of the UDD's Chiang Mai chapter, said the group will set up a provincial centre to cover Chiang Mai's 25 districts and the centre will monitor operations from now until the August referendum.

The centre is modelled on the red-shirt's existing network set up to monitor fraud during the 2011 general election, Pol Sen Sgt Maj Pichit said, adding the centre will not sway voters and only ensure the referendum is transparent.