The Election Commission mascot to promote the charter referendum on Aug 7. (Photo by Wichan Charoenkiatpakul)

Leading members of the Pheu Thai Party ignored all warnings and posted comments on Facebook on Wednesday morning declaring the draft charter that will go to referendum on Aug 7 "unacceptable".

They said they would vote against it.

Pongthep Thepkanjana, a former deputy prime minister, said: "Under this sort of rule, I cannot see a future for Thailand. It's totally unacceptable."

Noppadon Pattama, a former foreign minister, wrote: "I disagree with the people not being allowed to directly elect senators.  I also disapprove of the people not being able to vote with two ballot papers, as they could under the 1997 and 2007 charters.  So (the draft) is not acceptable to me." 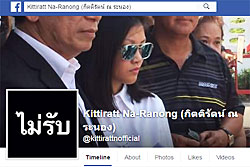 The Facebook wall picture of Pheu Thai member Kittiratt Na-Ranong comes with a message in a black box saying "reject", referring to the draft charter to go to referendum on Aug 7. (Kittirat Na-Ranong Facebook photo)

Phumtham Wechayachai, acting Pheu Thai secretary-general, posted: "The (draft) charter is undemocratic.  It curtails the people's power.  It provides insufficent guarantees for rights and freedoms,  and will be difficult to amend.  It will not bring about confidence in the country and will not be able to solve the country's problems. Therefore, I cannot accept it as the country's supreme law."

Former parliament president Pokin Polakul said in his post: "Both its origin and content are undemocratic.  It is not the people's draft.  I cannot accept it."

Plodprasop Suraswadi, a former deputy prime minister, said: "It is undemocratic, not up to international standards.  I cannot accept it as it will cause our children to suffer for a long time.  My decision is to vote against this draft charter."

Opposition to the draft charter was also expressed by Chusak Sirinil, chief of  Pheu Thai's legal affairs staff.  "The process of getting this draft charter done did not follow a true democratic line.  Its content is also undemocratic.  It should be not accepted as the country's supreme law.  I will exercise my right to vote against it," he wrote.

Former justice minister Chaikasem Nitisiri said: "This draft charter was written without the people's participation.  Therefore, it contains provisions that curtail and restrict the people's rights and power.  As widely criticised, several clauses are ambiguous and likely to cause problems if the draft becomes law.  I, for one, will not vote for it.  Other people can make their own judgements."

Samart Kaewmeechai, a former Chiang Rai MP and member of the party's committee follow up the drafting of the charter, said in his post: "I would like to exercise my freedom of expression under Section 7 of the 2016 Referendum Act and say that in a democracy, the people are the heart of it.  I cannot accept a charter which does not respect the people.  It is against international democratic principles.  Not acceptable."

Former commerce minister Watana Muangsook: "It is a draft charter that robs the people of their power and benefits, praises a dictatorial power, and prevents people from examining the dictators.  It is not acceptable to me."

"After reading Section 279, I am not sure whether it is a draft constitution or a law to grant amnesty to the National Council for Peace and Order.  I, who uphold the rule of law, will not vote for it," said Veerakant Musikhapong, a former chairman of the United Front for Democracy against Dictatorship.

Wan Muhamad Nor Matha, a former parliament president, also opposed the draft charter.  He wrote: As a former parliament president who countersigned a royal command to abrogate the 1997 charter, which was the best of all to me, I feel sorry that the draft charter contains provisions that deprive the people of their rights and freedoms, particularly regarding religion, education and politics.  It is much less democratic than the 1997 charter.  So, I cannot accept it."

Udomdet Rattanasathien, a former minister of social development and human security, wrote on his Facebook page: "I would like to express my opinion on the draft charter as allowed by Section 7 of the 2016 Referendum Act.  This draft charter looks down on the people.  Various organisations to be set up under it are designed to prevent the people's representatives from independently performing their duties.  I cannot accept this draft charter."

Kittiratt Na-Ranong, a former deputy prime minister, wrote: "I cannot accept a draft charter that is undemocratic because it will cause problems to the country and the quality of life of future generations."

Surapong Tovichakchaikul, another former deputy prime minister, said in his post: "I will not walk along the road they have drawn up for the country to go down for the next 20 years.  It is not acceptable to me."

A Pheu Thai source said the intention of Pheu Thai's leading members, in posting their Facebook comments, was to tell people in Thai society that it is their individual right to express their opinions, whether to accept or reject the draft constitution, and this must allowable by law.

"As it is now, in the lead up to the referendum, the government is creating an atmosphere that makes the people afraid of talking about the draft charter.

"We want to let the people know why each of the Pheu Thai leaders will not vote for the draft charter," the party source said.