Bangkok commuters were hit by flooded streets and traffic congestion Tuesday morning with pedestrians struggling to wade through the water while many were unable to leave home for work after a sudden downpour on Monday night.

"We apologise to the people affected by floods. But this problem will occur again [in the future] because Bangkok is a city of water and rain," Bangkok governor MR Sukhumbhand Paribatra said, trying to make the best of a bad situation which has also prompted the government to intervene. 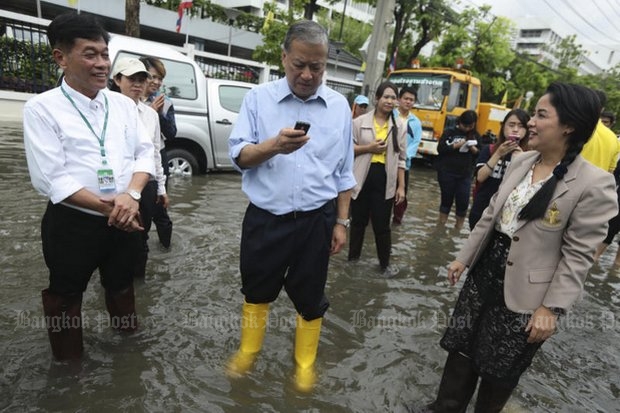 Bangkok governor MR Sukhumbhand was seen on a flooded street. He came under strong criticism for the second year in a row from members of the public who wanted to hold him responsible. (Photos by Patipat Janthong)

The city governor sent the message to his people after Bangkok roads suddenly turned into canals due to heavy rain in the previous 24 hours.

City residents also saw MR Sukhumbhand "in action", wearing yellow boots as he oversaw flood relief efforts. The governor said the BMA has deployed more personnel and equipment in major streets to prepare for more heavy rain in the next several days. 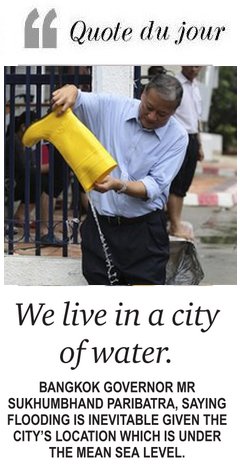 As a long-term solution, the governor said, work would continue on the BMA's drainage tunnel project at Khlong Bang Sue, expected to be complete in April next year.

The BMA also has other tunnel projects such as one for Khlong Prem Prachakorn and Bung Nong Bon to help solve flooding, although these projects and other drainage systems require huge budgets, the governor said.

MR Sukhumbhand said the city's persistent flood problem is unavoidable given the city's location which is under mean sea level.

Speaking after the regular Tuesday cabinet meeting, Gen Prayut said authorities have prepared flood response measures and equipment, such as water pumps, to help residents in the city's flood-risk areas.

However, the prime minister stressed the city's whole drainage system would have to be overhauled as a long-term solution.

While the drainage system is inefficient with too small drainage pipes to handle large volumes of water, the BMA's large drainage tunnel construction projects are not yet complete, Gen Prayut said. The government has allocated funds to support the BMA's efforts to tackle city flooding, which in turn has eaten into budgets for other purposes, Gen Prayut said.

"Rest assured the government will do its best to help people affected by floods. It is hard to avoid flooding as we know how the drainage system works. We need a sustainable solution," the prime minister said.

However, floodwaters later receded in 29 areas and drainage was under way in the remaining seven areas such as Soi 32 on Ratchadaphisek Road, the Criminal Court on the same road, Chatuchak Park on Phahon Yothin Road, and Sois 100 and 112 on Lat Phrao Road.

Mr Chatchai said the government has instructed the department to work with the BMA, the army, the police force and the Vocational Education Commission to drain floodwater from roads. Small rescue vehicles were put on standby to help commuters during rush hour while car repair and towing services were also offered for those whose vehicles broke down.

Dutch Ambassador to Thailand Karel Hartogh wrote on his Facebook: "Abundant rainfall caused flooding in Bangkok overnight. People start to worry again, as they always do around this time....

"The government has shown interest in taking advantage of our knowledge in water management. Hope he will give us the opportunity to deliver this time!" he said. "Time for Dutch water management experts to lend a hand,'' he added.

More rain is on the way. 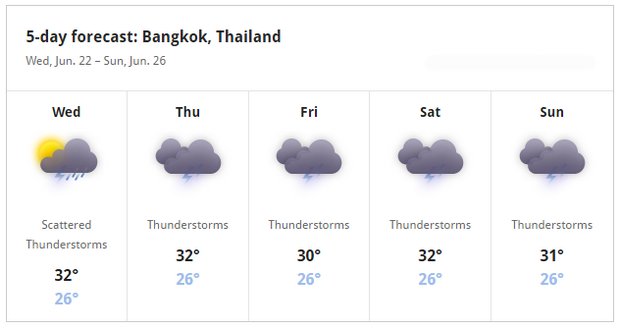