A self-described activist reads a banned 'Vote No' booklet at the Bangkok Art and Cultural Center in this photo taken last week. Authorities have loosened debate rules a little bit, two weeks before the scheduled referendum. (AFP photo)

The regime will allow debates on the draft constitution in all provinces ahead of the Aug 7 referendum, bowing to pressure for calls for open talks.

Deputy Prime Minister Prawit Wongsuwon said the National Council for Peace and Order (NCPO) will allow the debates which will be hosted by provincial governors and Election Commission officials.

The move came after members of political parties and a civil society coalition on Wednesday stepped up calls for open talks on the draft charter.

The civil society group, consisting of 117 individuals and 16 organisations, stressed the need for all stakeholders to be allowed to debate the contents of the charter with comprehensive and thorough information and for there to be a safe public space to do so. The group also urged the regime to come up with alternatives if the charter is rejected on Aug 7.

Gen Prawit said that if the draft charter does not pass the referendum, the 2014 interim constitution would be amended and the NCPO and the government would decide whether another constitution-drafting committee would be set up.

Gen Prawit gave assurances a general election would be held next year as planned.

Prime Minister Prayut Chan-o-cha said Thursday he had intended for open debates on the draft charter to be organised. 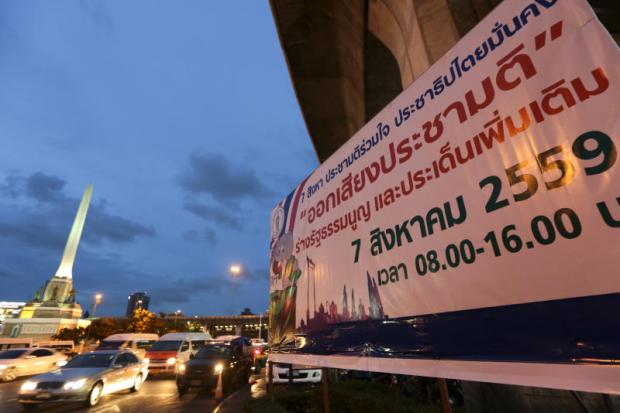 A large banner is put up near the Victory Monument encouraging voters to come out and vote in the draft charter referendum on Aug 7, from 8am to 4pm. The banner was produced by the Bangkok Metropolitan Administration. Patipat Janthong

However, the premier stressed the need to be sure the debates would not be forums for confrontation. "Now, I have granted your request, but there must also be certain limits. If you fight again, will you all take responsibility?"

He said the country's situation is still not normal, adding the country cannot move forward as long as there are people spreading distorted information about the draft constitution.

Asked what the NCPO would do if the draft charter is shot down, the prime minister said he would remain in office to ensure a new constitution is enacted.

"I will have a new draft charter drawn up, otherwise a general election cannot be held," Gen Prayut said.

"I know what I should and should not do. They want me to bend to their will, hold elections and so on. In conclusion, they only want to come to power, but they never help solve problems. I do not hate politicians, but I hate bad people."

Gen Prayut also warned people against trying to cause disruptions during the lead-up to the referendum, saying the EC is responsible for enforcing the referendum law to punish infractions.

He also brushed aside a prediction by well-known astrologer Warin Buawiratlert that a general election would not take place next year.

"I am the one who will make the election happen, not him," Gen Prayut said.

Constitution Drafting Committee (CDC) chairman Meechai Ruchupan said the CDC had not prohibited anyone from criticising the draft charter, and was ready to explain it clearly to opponents.

He dismissed claims by academics that they have been banned from expressing opinions on the draft charter. He said academics are still able to offer their opinions and have received more press coverage than the CDC.

He also said it was up to the public to decide if the draft charter will benefit the country and if they will vote for it.

However, he expressed concern that some "dirty tricks" had been used to distort the content of the draft charter and spread incorrect information.

Regarding the civil society group's call for an alternative if the draft charter fails to pass, he said the government and NCPO will have the power to fix any problems after the referendum.

He also said that nobody could come up with alternatives or solutions before a problem actually materialised.

Election commissioner Somchai Srisutthiyakorn said Thursday the first TV debate on the draft charter will be taped today, and will be broadcast on Monday.