NCPO told to bow out if it fails poll test

A packed house at Thammasat University heard and saw skits and speeches against the draft constitution from 43 groups including Nitirat, but came down strongly in favour of 'Vote No' in the referendum still scheduled for Aug 7. (Photos by Wichan Charoenkiatpakul)

The regime must step down and let the people take part in a process to draw up a new constitution if the draft charter is shot down in the Aug 7 referendum, a seminar was told.

The call was made during a seminar at Thammasat University by the Nitirat group of Thammasat law lecturers and grassroots people's movements, which have demanded a more participatory charter-drafting process.

Piyabutr Saengkanokkul, a Thammasat University law lecturer and member of the Nitirat group, told the seminar the regime must relinquish its power and must not be involved in the process to draft a new constitution if the draft charter is voted down.

He suggested that after the election, the next government set up a constitution drafting assembly made up of the people to draw up a new constitution, without any involvement by the regime.

Thammasat law lecturer and Nitirat group leader Worachet Pakeerut said it is unclear if the referendum will take place as planned given that the leader of the National Council for Peace and Order has power under Section 44 of the interim charter to decide whether to postpone the referendum.

He noted the draft charter is designed in a manner that makes it hard to amend, which would be a "time bomb" leading to future political violence. "If the draft charter fails to pass the referendum, the legitimacy of the NCPO will be called into question," Mr Worachet said.

Earlier in the day, a "villagers' forum on the draft constitution and referendum" was also held at Thammasat and reached broadly the same conclusion.

Grassroots people's movements urged all sides to accept the outcome of the referendum, whichever way it goes. But they said if voters say "No" to the draft charter, the NCPO must step down and allow the public to participate in a process to draw up a new constitution. 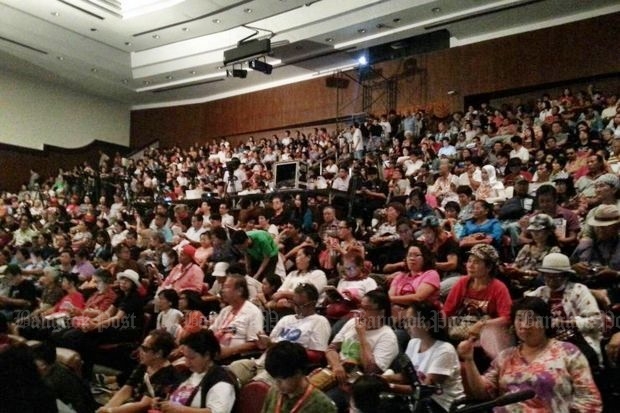 A packed house heard and saw skits and speeches against the draft constitution, but came down strongly in favour of 'Vote No' in the scheduled Aug 7 referendum.

Somchai Krajangsang, of the Civic Groups for Welfare System, said all is not lost in the event of a No vote. "If the draft charter which we oppose is accepted, we still can work to rectify things through the National Steering Reform Assembly. If the voters give it the thumbs down, the NCPO and the government should allow all sectors to join the new charter drafting body," he said.

Supaporn Malailoy, of the Group of People Affected By Section 44, said if the number of No votes is larger than the Yes votes, a new charter drafting process would be needed with representation of people from diverse groups, and either the 1997 or 2007 constitutions should be adopted in the interim.

Tuwaedaniya Tuwaemae-ngae, a core member of Permatamas, an environmental and community rights protection group in the South, said if the draft charter is voted down, the NCPO and the Election Commission must not be involved in appointing new drafters and organising the next election.

Also at Thammasat University, 43 civil, academic, and student groups Sunday issued a statement urging a "No" vote on the draft constitution as well as the extra question to be added to the Aug 7 referendum.

Voters will be asked whether the 250-appointed senators serving a five-year term during the transition period to full democracy should be allowed to join the House of Representatives in the voting process to select a prime minister for this period.

The groups said the charter drafting process lacked legitimacy from the beginning because the coup-appointed Constitution Drafting Committee (CDC) led by Meechai Ruchupan does not represent the public.

The CDC caters to the needs of the NCPO without listening to the voices of the people, the statement said.

The groups said several draft charter provisions, such as the appointed Senate, would send the country backwards. They said the election that will be held under the draft charter will be a tool to legitimise the NCPO's hold on power.

The groups also demanded the NCPO stop legal threats against those who voice differing views on the draft and allow the public to discuss the issue freely.