Foreign Direct Investment (FDI) has plunged despite strong campaigning such as this appeal by economy czar and Deputy Prime Minister Somkid Jatusripitak at the Bangkok Nikkei Forum 2016 on July 7. (Post Today photo)

Foreign direct investment (FDI) in Thailand in the first half of the year fell by more than 90% in value to the lowest mark in over a decade at US$347 million, reports the Bank of Thailand.

The report said FDI declined from $4.2 billion in the same period last year to the lowest value since 2005. The decline was attributed to the structure of Thai industry, which continues to produce low-technology products even as Thai wages rise relative to neighbouring countries'.

The sluggish global economy has also kept foreign investors on the sidelines.

"They are taking a wait-and-see approach until they see solid signs of recovery in major countries," said the report. 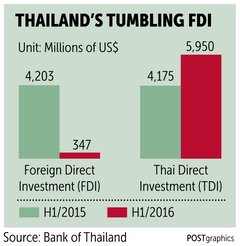 Political uncertainty in Thailand may have discouraged investment. The country has a referendum on the latest constitution draft on Sunday. The outcome will likely affect whether a general election takes place as scheduled.

However, the central bank hopes the latter half will see an improvement in FDI as the world economy is projected to improve gradually and the Thai political environment may be clearer after the referendum.

FDI actually rose in the second quarter of 2016, tallying $1.13 billion compared with a contraction of $789 million the same period last year. The influx of foreign capital flowing to equity and bond markets should increase FDI again, the report said.

In June, foreign capital to those two markets totalled $2.23 billion.

The central bank attributed the June inflow to the Brexit effect, which should delay any Federal Reserve interest rate hike, and FDI in particular sectors such as telecommunications.

Hirunya Suchinai, the secretary-general of the Board of Investment (BoI), played down the issue, saying the nosedive was because of the different way the board and the central bank measure investment value.

She said the BoI calculation is based on investment applications the BoI approves. The central bank figure includes investment value and capital inflow-outflow, causing the difference.

"The BoI measurement was the real investment value from 328 projects the first five months this year," said Mrs Hirunya, referring to 84.39 billion baht, up 604% from 11.99 billion year-on-year.

The biggest foreign investors here are Hong Kong, leading with 23.2 billion baht, followed by Japan at 19.27 billion and the Netherlands at 10.95 billion, she said.

Mrs Hirunya said in the first half this year, foreign investment in Thailand rose substantially thanks to a big jump in June, with 758 new investment projects worth a total investment value of 303.66 billion baht.

That was up 327% from the same period last year, which saw 71.14 billion baht of investment value from 408 projects. The rise was attributed to government attempts to support investment such as its cluster policy, special economic zones and the plan to promote the Eastern Economic Corridor.

She is still confident FDI for 2016 will reach the BoI's target of 450 billion baht.

Thai overseas investment in the first half this year skyrocketed by 42.5% year-on-year to $5.95 billion, reported the central bank.

The BoI put the figure at $7 billion for the first five months this year, with deputy secretary-general Chokedee Kaewsang noting it was up from $2 billion in the same period last year.

He attributed the rise to expansion and business diversification, particularly for mining and renewable energy businesses.

"This year the BoI expects new investment in other sectors such as manufacturing and banking outside the country to boost the value of Thai investment abroad. We have seen positive signs that these sectors have the potential to grow in overseas markets," said Mr Chokedee.