Thaksin says charter a 'folly' ahead of referendum
Thailand
Politics

Thaksin says charter a 'folly' ahead of referendum

The Election Commission holds a big campaign at the Royal Plaza on Thursday to encourage people to vote in the constitution referendum on Sunday. (Photo by Apichart Jinakul)

Former prime minister Thaksin Shinawatra on Thursday criticised the draft constitution as a "folly" that would perpetuate the power of the ruling junta and make it impossible for future elected governments to rule.

The country will decide in a referendum on Sunday whether to accept the constitution in the biggest test of public opinion since the generals seized power in 2014.

Thaksin said in a statement emailed to Reuters the charter was a "nightmare of contradiction and confusion".

"The drafters ... created a constitution for the 'continuity' of the absolute power of the present coup makers to continue even after the new constitution is proclaimed," he said in response to a question about his opinion on the referendum.

The National Council for Peace and Order (NCPO) has said the charter will pave the way for a general election in 2017, ensure clean politics. 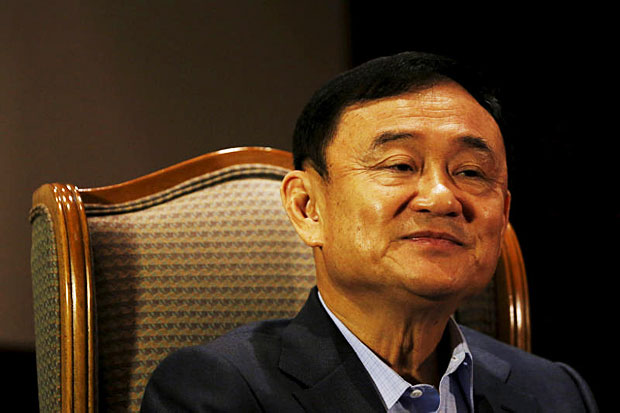 Former prime minister Thaksin Shinawatra looks on as he speaks to Reuters during an interview in Singapore on Feb 23, 2016. (Reuters file photo)

Thaksin, a former telecommunications tycoon who won the loyalty of legions of poor voters with populist policies, was toppled in a 2006 coup. He lives in self-exile to avoid a graft conviction he says was politically motivated.

The Phue Thai Party, which is loyal to Thaksin, and Democrat Party leader Abhisit Vejjajiva oppose the constitution because they say provisions are designed to ensure military supervision of politics.

The constitution would put so much power in the hands of bodies tasked with acting as counter-balances to governments that it would make Thailand ungovernable, Thaksin said.

"I predict that, even if the new government receives perfect endorsement from the present regime, it will find it impossible to manage the Thai economy or administer the country under those proposed conditions," he said.

The NCPO has said it wants to return Thailand to democracy but to ensure politicians put the people's interests first.

Prime Minister Prayuth Chan-ocha has said he would come up with another charter if this one is rejected.

About 50.5 million people are eligible to vote in the referendum and the Election Commission (EC) has said it expects an 80% turnout.

"Everyone in the country ... must come out to exercise their right to vote," EC chairman Supachai Somcharoen said. "This is the big day."