Anti-coup activist and Thammasat student Piyarat Chongthep was arrested Sunday for ripping up his ballot at a Bang Na polling unit to oppose the draft constitution.

The 25-year-old Piyarat shouted “Death to Dictatorship, Long Live Democracy” before he tore up the ballot. He was wearing a T-shirt bearing the message “No coup”.

He was taken to Bang Na police station for questioning.

Mr Piyarat is an MA student in law at Thammasat University. He has participated in a number of activities held by the anti-coup New Democracy Movement and the Resistant Citizen group and was arrested on security charges several times.

He said later he would fight any charges in court.

He accused the military-led government of destroying the rule of law and depriving Thais of their civil rights. As a result, he could not accept the draft charter and regarded the referendum as unlawful.

Boonyakiat Rakchartcharoen, acting secretary-general of the Election Commission, said 21 incidents of ballot-tearing had been reported at 21 polling units in 14 provinces.

However, many of the offenders were elderly folk who were not regarded as being politically motivated when they tore up their ballot paper because of a misunderstanding. Each ballot has two parts in two colours and a dotted line in the middle.

A 42-year-old man in Surin province ripped up his ballot because he was drunk from lao khao (white spirit).

Election Commission member Somchai Srisutthiyakorn said the offenders were arrested and interrogated about whether they damaged the ballots intentionally or unknowingly. If unintentional, he said police would have the final say on whether to release them. 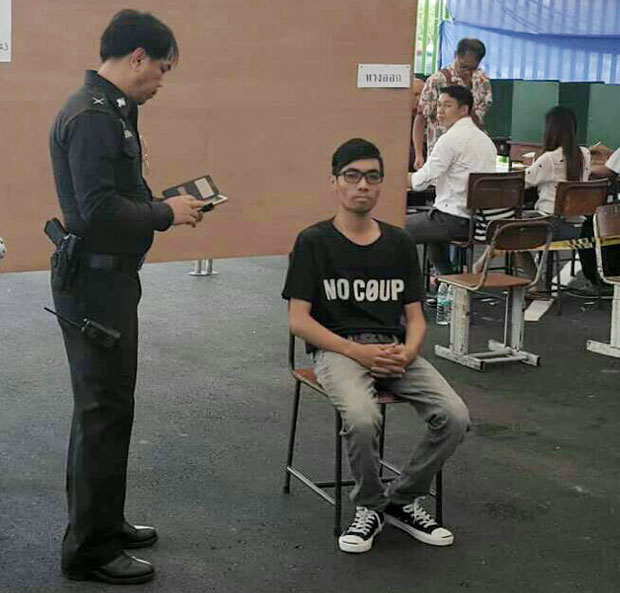 Anti-coup activist Piyarat Chongthep in police custody after he tore up his referendum ballot in Bangkok’s Bang Na district on Sunday.