Forensic evidence suggests the explosive devices used in multiple bomb and arson attacks in seven southern provinces last week were of the same type used in the far South, despite the military regime's attempts to brush aside the connection.

The National Council for Peace and Order (NCPO) has blamed political conflict following the Aug 7 referendum and those who lost political "interests" for the attacks which claimed four lives and injured 35.

NCPO spokesman Piyapong Klinpan said Sunday a campaign was under way by some groups to mislead the public into believing the violence was related to the insurgent movement in the deep South, particularly the Barisan Revolusi Nasional (BRN).

"The bombs went off and now they are talking. I think they are trying to create confusion," he said. 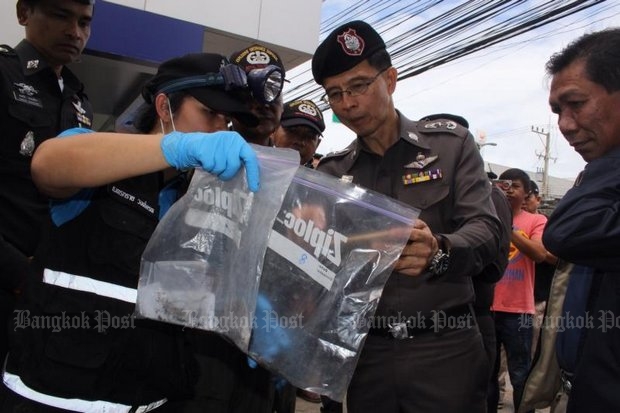 A forensic team bags materials found at Taveesin Plastic, a Surat Thani shophouse on Kanchanavithee Road that was ravaged in fire on Friday. In another search Sunday, the officers found parts of a mobile phone and liquid alcohol. (Photo by Supapong Chaolan)

Consistent with the NCPO argument, deputy national police chief Pongsapat Pongcharoen reiterated the multiple bomb attacks had nothing to do with the southern insurgency.

He said police were making significant progress in their probes into the violent incidents.

However, forensic results did not reject a possible link to southern insurgents.

"The bombs used in the Phuket, Phangnga and Surat Thani attacks were related and similar to those found in insurgent attacks in the deep South," said Pol Lt Gen Suchart Theerasawat, assistant national police chief, after a meeting investigators and forensic experts in Surat Thani on Sunday.

However, he said it was too early to conclude the attacks were carried out by the same group of people. 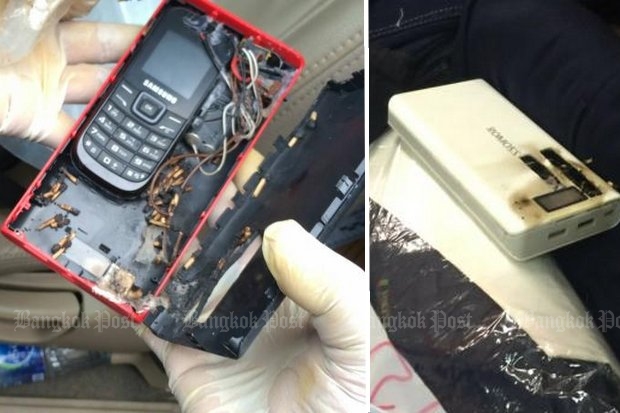 Left above, an EOD technician inspects one of the two unexploded bombs found at a market near Patong beach in Phuket, designed to start a fire. Right, a partially burned powerbank was discovered at a clothes stall in Chatchai market in Hua Hin. (Photos by Achadtaya Chuenniran, Chaiwat Satyaem)

A source close to the investigation said a group of attackers had met in Nakhon Si Thammarat's Chawang district in late July and the meeting was arranged by a politician.

The source said the attackers were divided into two groups -- one responsible for the explosives and the other for arson -- and this group carried out the attacks in Phuket, Phangnga, Trang, Nakhon Si Thammarat and Surat Thani.

According to Malaysian Bernama news agency, Thai security forces are seeking Malaysia's cooperation in investigating a series of bombings in several southern provinces.

Weekend searches turned up unexploded devices at tourist areas of Hua Hin and Phuket, and in Phang Nga province.

The unexploded bombs were defused Sunday in Hua Hin and Phuket, after being found in areas frequented by tourists - just like those what went off last Thursday night and Friday morning - according to the interior ministry permanent secretary.

"It is likely they were intended to explode at the same time as the previous explosions," said Grisada Boonrach.

Mr Grisada Boonrach insisted the devices found in Hua Hin and Phuket were planted between Aug 11 and 12 and urged the public not to panic.

"The ministry has asked authorities to scout for bombs with delayed ignition. They were not new ones," he said.

Police said other unexploded devices were found Saturday in Phang Nga province, which had been struck by bomb blasts and a suspected arson attack last Thursday.

According to security sources, Thailand sought Malaysia's cooperation to investigate a mobile phone used in one of the bomb blasts in Phuket, which is said to have been from Malaysia.

Prime Minister Prayut Cha-o-cha will visit Malaysia tomorrow and is expected to raise the attacks in Thailand at his meeting with his Malaysian counterpart Najib Razak.

Gen Prayut's trip was originally scheduled to be a two-day visit from Monday through Tuesday, but after the bombings it was changed to a one-day visit.

However, the source said, the latest attacks in Thailand would also be raised.

Meanwhile, Thai intelligence officials have not brushed aside the possibility that the series bombings and arson attacks were the work of the BRN.

"They have been doing this for decades: the 1993 torching of 36 schools in one night; the military weapons robbery of Jan 4, 2004; intensified arson attacks, shootings and bombings throughout the past decades in deep South; and the Samui bombings in April last year," said military intelligence sources from the southernmost provinces.

The group does not bother to claim responsability and does not care if other groups do so, the intelligence officers said.

Officials investigating BRN field commandos are confident the recent attacks were a "show of force and network expansion" of Thailand's largest insurgent group.

"In combing the whole nation to check against Islamic State and other terrorist elements in the past year, Malaysia has inevitably pressured the insurgent exiles, and dozens of them have crossed back into Thailand. All of them can't stay active in the deep South due to the heavy military presence," the sources said, implying those insurgents might become active in other regions.

The BRN held meetings with members and bomb makers on Aug 1 and planned to launch the operations 10 days later in areas were they had enough supporters, the sources said.

"They have also sent key messages that they did not want a new charter until the parliament -- civilian or military -- addresses their Malay Muslim identity as a group or state in the highest law," said the military sources.

The sources also rebutted the notion the bombings would encourage the government to engage more enthusiastically in peace talks with the Mara Patani group. Instead, the opposite would be the case, they said.

"Mara doesn't represent the militant wings, why should the Thai government bother listening to them again as it is clear that they can't control anything," they said.

The Police Region 7 Bureau has offered a 200,000-baht reward for clues about the attacks in Hua Hin.

Also on Sunday, the red-shirt United Front for Democracy against Dictatorship condemned the government and its critics for suggesting that the violence was politically motivated.

The group called on authorities to run a transparent investigation and explore all possible motives including the southern insurgency.