Jatupat Boonpattararaksa (centre), a student at Khon Kaen University in the northeast, was detained for handing out "vote no" leaflets on Aug 6. (Photo from Wannasingh Prasertkul Facebook)

A student activist at Phu Khieo Prison in Chaiyaphum province has collapsed on the 10th day of a hunger strike after he was detained for campaigning against a military-backed draft constitution.

On Aug 6, Jatupat Boonpattararaksa, a student at Khon Kaen University in the northeast, was detained for handing out "vote no" leaflets.

Mr Jatupat faces charges of violating the ban on campaigning but he refused to seek bail on ground he had done nothing wrong.

He is being held at the prison has been on a hunger strike since Aug 6, said Prim Boonpattararaksa, his mother and lawyer. According to Thaimedia, he has been living on water, milk and juice.

Mrs Prim said after her son fainted with a high fever and remained unconscious on Tuesday, she submitted a letter to the prison's governor seeking to send him Phu Khieo Hospital.

Mr Jatupat, better known as Pai Dao Din, is a member of Dao Din, a group of student activists focusing on helping northeastern villagers protect natural resources, especially in cases where their rights are allegedly breached by authorities. After the 2014 coup, some members of the group have join the New Democracy Movement (NDM)'s anti-coup protests.

According to the NDM Facebook, the prison governor turned down the request, saying he did not have enough manpower and pressured the mother and son to seek bail. In any case, he moved Mr Jatupat to the prison's infirmary. 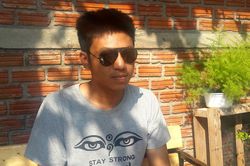 In this May 13 photo, Jatupat Boonpattararaksa, a law student and member of Dao Din, an anti-coup group, speaks during an interview with Reuters in Khon Kaen. (Reuters photo)

The group urged his immediate transfer to the hospital, saying an inmate deserved a standard treatment. "A detainee's choice to not seek bail should not subject him to substandard care," the group wrote.

"This is especially the case for Pai, who was arrested simply because he had honestly and democratically expressed his opinions. He shouldn't have been in this state from the start. We urge an immediate transfer to the hospital."

The New York-based Human Rights Watch called for Mr Jatupat's release on Tuesday and said he should be given access to medical treatment after he passed out on Monday.

"In the meantime, he should be under the supervision of doctors in case his health condition worsens."

"The court has allowed him to bail himself out so it is possible for him to leave the prison," he said.

Voters overwhelmingly approved a constitution backed by the ruling junta in an Aug 7 referendum, paving the way for a general election in late 2017.

Ahead of the vote, the junta banned open discussion about the charter and criticism of the draft was made punishable by up to 10 years in jail. Critics of the junta say the constitution will enshrine the military's political role for years to come.

Despite the ban on campaigning, students were among the most vocal critics of the constitution.