Prayut mulls staying on as premier

Prime Minister Prayut Chan-o-cha has said for the first time that he would agree to discuss becoming the next prime minister after an election if there really are no "good" other options.

"Don't ask about such an unforeseeable thing. Like I've said, why fear the invisible ghost? Anyone else [can be the next prime minister] and I think there are many more who are better than me," Gen Prayut said regarding the matter.

"Try choosing one of them, but if you cannot really find any good one, then come to discuss that with me," he said.

He was responding to a question about Paiboon Nititawan, a former member of the now-defunct National Reform Council, who announced his intention to set up a political party and run in the next general election for the House of Representatives.

Mr Paiboon might say whatever he likes to say but it is unfair for anyone to drag me into this matter, said Gen Prayut.

"Let's talk about now. You may choose whoever you like when the time comes. And please don't drag me into this, which will only stir up conflicts. If more conflicts arise at this point, how could our nation manage to move on?" he said.

The priority is to ensure peace while focusing on drafting and passing the organic laws required to facilitate the new election, he said.

When asked for opinions about Mr Paiboon's claim that a majority of voters voted in favour of the draft charter because they wanted Gen Prayut to continue as prime minister, he said the question should instead go to those voters, not him.

"This isn't the time to discuss this matter and I won't answer any questions about that. Anything I may say will only lead to conflicts with this and that person. I'm not going to say anything. It's not time for the election yet," he said.

Gen Prayut also expressed doubts over the National Legislative Assembly's (NLA) idea to scrap the rule in the draft charter requiring MPs to select the prime minister from lists submitted by political parties.

A number of NLA members want the draft charter to be rewritten so that the MPs and senators will jointly participate in the selection process from the outset and not have to choose the new prime minister only from lists submitted by the political parties, opening the door to an outsider candidate.

The NLA and the Constitution Drafting Committee (CDC) will discuss the issue tomorrow.

Committees tasked with drafting the election organic laws will have to listen to all concerned parties before they begin, Gen Prayut said.

National Reform Steering Assembly (NRSA) member Wanchai Sornsiri, spokesman for the NRSA's committee on political reform, meanwhile, said the draft charter should be adjusted to be line with the extra question approved in the Aug 7 referendum.

Since the approved extra question states that in the five-year "transitional period", a joint House-Senate session will be held to decide the appointment of the new prime minister, the draft charter should now be adjusted to make it correspond to the extra question, said Mr Wanchai.

And since both the House and Senate hold the right to vote for the prime minister, they should both reserve the same right to nominate the candidates who can be either the insiders or the outsiders, he argued. 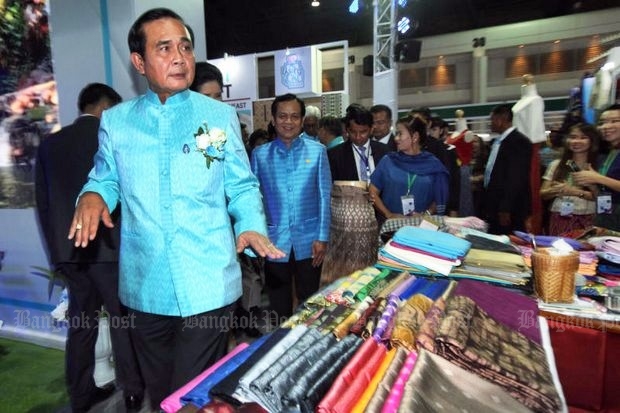 Prime Minister Prayut Chan-o-cha, at the Otop Fair at Impact, Muang Thong Thani on Wednesday, admitted he was considering staying on as unelected prime minister after elections now pencilled in for December of next year. (Photo by Thiti Wannamontha)

The Election Commission (EC) now expects to set Dec 10 next year, Constitution Day, for the general election, according to commissioner Somchai Srisutthiyakorn.

The date seems in line with the government's road map to hold the election next year, he said.

This time frame is possible if the drafting of organic laws needed before the election does not face major problems, he said, adding, if the process faces delays, a different date may be suggested.

Dec 10 has been proposed and approval needs to wait as the EC is required to hold off until the four organic laws concerning election organisation take effect; then it can formally set the date, he said.