Gen Preecha Chan-o-cha, permanent secretary of the Ministry of Defence, and his wife Phongphan have been shamed online for misuse of state assets, and now new allegations of cronyism have come after their son won two military construction projects. (Photo by Tawatchai Kemgumnerd)

His remarks followed Isara News Agency reports that Contemporary Construction Limited Partnership, which is partially owned by Gen Preecha's son, won bidding for some of the 3rd Army Region's construction projects from 2015-2016.

The projects involve two residential buildings for military officers and for Fort Wachiraprakan Hospital, with a combined budget of 26.9 million baht, according to the agency. "I have nothing to do [with helping him win the projects]. I did not abuse my position," he said.

Meanwhile, Gen Preecha said he had no objection if the National Anti-Corruption Commission (NACC) were to probe him for alleged misconduct and dereliction of duty over the construction of a weir named after his wife.

The petition was filed by the Association for the Protection of the Constitution secretary-general Srisuwan Janya who complained Gen Preecha and three other senior officers had allegedly used state resources and personnel in the construction of a weir named after Gen Preecha's wife, Pongphan. 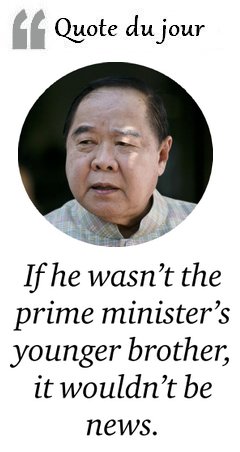 The army officers have also been accused of using an army aircraft to transport a delegation including Pongphan Chan-o-cha, Gen Preecha's wife, from Bangkok to the construction site in Chiang Mai.

Members of the delegation were not state officials and their acts violated the anti-corruption law, Mr Srisuwan said.

Gen Preecha said Tuesday he was ready to be probed if authorities have enough grounds to believe he was involved in the alleged misconduct. He was ready to testify against the allegations, he added.

Also Tuesday, Mrs Pongphan said she intended to help locals in Chiang Mai build the weir, which the residents named after her out of respect. She said the weir was owned by the residents. "It doesn't matter whose name is on the weir as long as the locals own it," she said.

Deputy Prime Minister Prawit Wongsuwan also supported an NACC investigation against the senior officers, saying the agency should go ahead with the probe to ensure fairness. NACC chairman Watcharapol Prasanratchakij said the commission has received the case. He assured all parties involved that an investigation will be transparent to ensure justice and fairness.