Wat Bunyakannawat in Ayutthaya's Bang Ban district is under a metre of water and floods are spreading across the province, although Prime Minister Prayut Chan-o-cha promised last month there would be no flooding at all. (Photo by Sunthorn Pongpao)

The Royal Irrigation Department has warned more areas in the Central Plains to brace for flooding as it continues to release more water from the Chao Phraya dam in Chai Nat.

This was expected to cause more areas, especially in Ang Thong and Ayutthaya, to become inundated, he said, adding residents were advised to closely monitor the flood situation and heed warnings from state agencies.

In Ayutthaya, at least 204 villages in four districts have been flooded and the levels of floodwaters continued to rise Sunday by between 40 and 50 centimetres, making the average floodwater level rise to over one metre.

In Bang Ban district, the area hit the hardest by flooding in Ayutthaya, all 16 tambons were already suffering flooding that was affecting more than 11,000 people in 86 villages.

Among Buddhist temples being affected by flooding, Wat Boon Kannawat in Bang Ban district's tambon Sai Noi appears to have been the most heavily inundated. Statues and pagodas there were covered by about 1-metre-deep floodwaters.

Aside from Bang Ban, Sena and Phra Nakhon Si districts were also flooded. The level of run-off rose between 20cm and 30cm on Sunday.

But as some areas of these districts struggled to cope with floods, a number of rice farmers in some parts of Bang Ban and Sena districts were complaining about water shortage that was affecting close to 100,000 rai of paddy fields.

They were calling for irrigation authorities to open sluice gates to divert floodwater into the dry areas and make them serve as kaem ling water retention zones.

Areas along Khlong Bang Phongphang canal in Pa Mok district of Ang Thong were also being warned of more flooding. 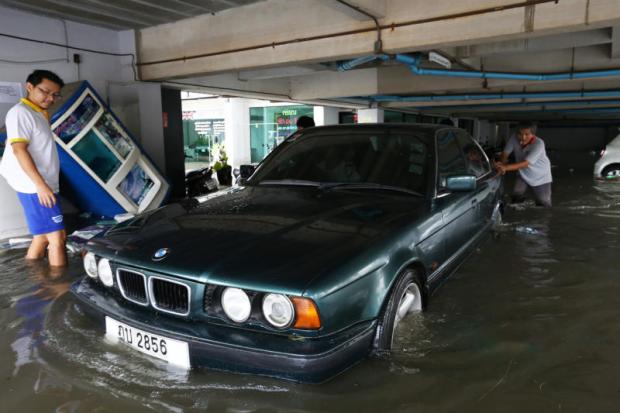 People push a car out of a flooded parking lot in the Muang Ek housing estate in the Rangsit area of Pathum Thani. Flooding that inundates many aeras Sunday was triggered by heavy downpours the previous night. (Photo by Tanaphon Ongarttrakul)