The appointment of 1st Army commander Lt Gen Apirat Kongsompong reflects the National Council for Peace and Order's (NCPO) attempt to ensure there are no counter-coups while the regime clings on to power over the coming years.

The commander took office Monday as the new army chief Gen Chalermchai Sitthisat raised the prospect of a flare-up of political violence due to anti-regime activities.

In his first day in office, Lt Gen Apirat pledged to prevent coups while maintaining peace and order and implementing the orders of the prime minister, the defence minister and the army commander.

"My mission is to protect the monarchy with my life, and I will strictly follow the instructions of the prime minister, defence minister and the army chief and support the government without question," he said. 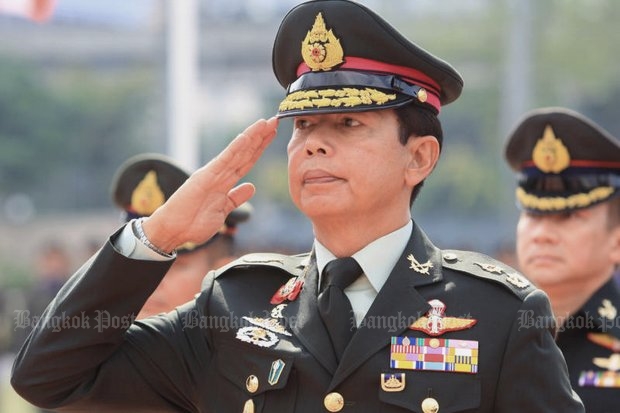 Then Maj Gen Apirat Kongsompong was appointed as head of the junta loyalist First Army in 2014, and shortly after was ordered to fix the 'problems' of overpriced lottery tickets and alleged disorganisation among Bangkok motorcycle-taxi drivers. (Photo by Tawatchai Kemgumnerd)

The 1st Army is known to be a key unit controlling troops in 26 provinces including Bangkok.

The army is well aware of Lt Gen Apirat's intentions. He was handpicked by Prime Minister Prayut Chan-o-cha.

Lt Gen Aprirat is the son of the late ex-Gen Sunthorn Kongsompong. Sunthorn, who died in 1999, was an author and the de facto head of the junta that overthrow the Chatichai Choonhavan government in 1991.

Sunthorn and Gen Suchinda Krapayoon were overthrown themselves by popular protests in 1992, but only after they killed an unknown number of people holding peaceful protests. The number of deaths during the "Black May uprising" remains unknown.

Last week, just days before the event, he informed organisers of Post Forum 2016 that he would attend, along with 260 security officers, and stipulated that the Forum coordinators must provide seating and a full meal for each of them.

The reason for the increase in personal security is unknown.

While Government House and military sources say they know of no plots or threats against the prime minister, they would naturally say that no matter what the actual situation was.

But reporters covering government and the prime minister's day to day activities say they are unaware of any rumours of threats, either to Gen Prayut personally or to his junta.

It is also known that Defence Minister Prawit Wongsuwon rooted for Lt Gen Kookiat Srinakha to take the post. But eventually, Lt Gen Kookiat was named commander of the 1st Army Corps.

Lt Gen Apirat is trusted by Gen Prayut despite not coming from the Burapha Phayak (Tigers of the East) clique.

When Gen Prayut staged the coup in May 2014, Lt Gen Apirat served as commander of the 1st Division, King's Guard, in charge of the troops in Bangkok.

After that Gen Prayut appointed Lt Gen Apirat to oversee the Government Lottery Office when the NCPO was focused on tackling overpriced lottery tickets.

The appointment of Lt Gen Apirat reflects Gen Prayut's intention to prevent a counter coup that may arise if he stays in power.

He is expected to be the "outsider" prime minister when an election is called under the new charter.

It is believed that without consent from the 1st Army Commander the army could not stage a coup.

Gen Prayut also vouched for Gen Chalermchai as the army commander, instead of Gen Pisit Sithisan who was backed by Gen Prawit.

Gen Prayut evaluated the risks and determined it was safe to promote Gen Chalermchai to the army's top post, where he will be surrounded by trusted aides.

Army officers in the Burapha Phayak faction are concerned about a counter-coup following the appointment of Gen Chalermchai as the army chief.

That was why Gen Prawit supported Gen Pisit for the job. 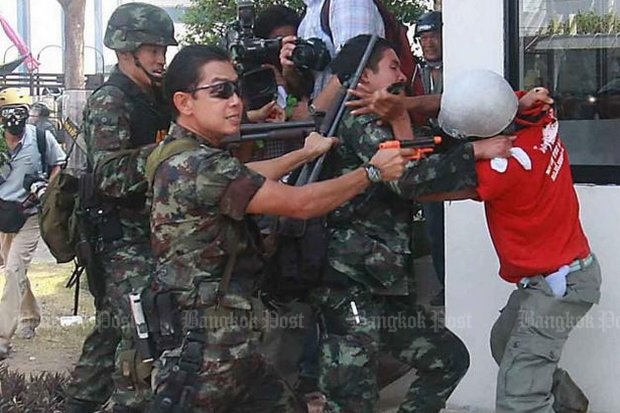 In 2010, then-Col Apirat was in charge of combat against the red shirts in Bangkok, and was photographed actually firing tear gas during a clash. (Bangkok Post file photo)

Gen Chalermchai, however, ruled out a counter-coup yesterday.

"What is the reason for a counter-coup? In this situation, it is impossible. The previous coups were staged because the people needed them. We hope it will be the last," said Gen Chalermchai.

"I am a soldier by profession. I can tell you there will be no coups d'etat. I support the government and the NCPO in proceeding with their roadmap toward elections. A counter-coup will not take place," he said.

The new army chief also foresaw political violence as most of the army's guns stolen during red-shirt demonstrations in 2010 remain missing and the possibility of attacks remains.

Gen Chalermchai said yesterday possible attacks were his concern because only a handful of the stolen army weapons had been recovered.

Army intelligence pointed to the possibility of violence because of discontent with the regime by its long-time opponents, he said.

"I am concerned about the activities of violence-oriented people... Weapons were stolen in 2010 and a large number of them remain unaccounted for," the army chief said.