Auditor General Pisit Leelavachiropas already has "some information" on the trip to Hawaii by Defence Minister Prawit Wongsuwon and he can't find any problem with Hawaii-gate. (Photo by Tawatchai Kemgumnerd)

The Office of the Auditor-General (OAG) said it has not yet found any irregularities in Defence Minister Prawit Wongsuwon's 20.9-million-baht chartered flight to the Asean-US defence meeting in Hawaii last week, which critics allege was overpriced.

Auditor-General Pisit Leelavachiropas was speaking after Srisuwan Janya, secretary-general of the Association for the Protection of the Constitution, petitioned him Wednesday to scrutinise the expense of the flight organised by Thai Airways International Plc (THAI) to transport Gen Prawit and 37 members of his entourage to Hawaii for the three-day meeting, which concluded on Saturday.

Criticism was sparked after the cost of the flight was shared on the Secretariat of the Prime Minister's website, which included 600,000 baht spent on in-flight food and drinks.

Mr Pisit said the OAG had gathered some information on the case. He said he went to THAI's office on Monday to examine the arrangements for the flight, but the final expense for the flight has yet to be concluded.

The OAG has to wait for the bill which will be issued by the airline, he said.

In this case, there was no scheduled flight to Hawaii, so it was necessary to organise a chartered flight to transport the group, he said. The trip also involved the defence minister and other delegates, so it needed to take into account their standing and international protocols, Mr Pisit said.

The auditor-general said he would report on the progress of the probe again tomorrow.

Meanwhile, social media focused on an unconfirmed list of 46 passengers released online, said to be on the controversial flight, questioning if anyone joined the trip who was not involved in the defence meeting.

The name of Chonratsamee Ngathaweesuk, a news anchor of the military-run Channel 5, was circulating online.

Ms Chonratsamee posted on her Facebook page Wednesday insisting that she was not on the trip.

"Ridiculous, on Friday [Sept 30], I was broadcasting live on Channel 5 but someone imagined that I was on board. This means my programme is not famous enough yet, watch my programme please," she wrote. 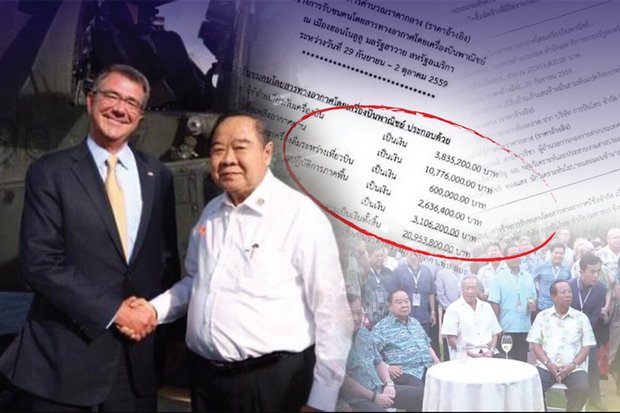 "I do not lie. I was on the trip, but I did not see the anchor," Maj Gen Kongcheep said.

He said there were a total of 38 passengers travelling on the outbound flight. But three military officers, who went earlier to the US to prepare for the trip, were on the return flight to Thailand.

He insisted all the passengers went to the US for work, adding it was important to have all those people for the talks.

Gen Prawit normally goes on overseas trips with 10-15 people in his entourage, but more were needed this time for talks with US counterparts, including the US defence secretary and the chief of the United States Pacific Command, he noted.