Joshua Wong makes a video call on Skype from Hong Kong to Chulalongkorn University on Thursday. (Photo by Patipat Janthong)

Hong Kong pro-democracy activist Joshua Wong, deported from Thailand on Wednesday, joined a Chulalongkorn University discussion on politics on Thursday night, but followed warnings by Thai authorities to stay away from several subjects.

Mr Wong made a video call on Skype from Hong Kong to the university that lasted about 30 minutes from 7.30pm to 8pm.

He complied with conditions that he not talk about his detention in Bangkok on Wednesday, incite the people or criticise Beijing. Officials had warned him that they would cut his connection if he did so.

He also agreed to speak only about his life, his studies, political changes after Hong Kong returned to China, and the massive pro-democracy known as the "Umbrella Movement" which he helped organise in the Chinese-ruled city in 2014.

Netiwit Chotiphatphaisal, a politicial science student, had invited Mr Wong to join the discussion, but the high profile activist was detained upon his arrival in bangkok on Wednesday.

Mr Netiwit was one of the organisers of the "October 6: Chula looks to the future" discussion, which included talks on the direction of Thai politics from the perspective of the new generation. The discussion was held to commemorate the 40th anniversary of the massacre of student protesters in the Thai capital.

Thailand's detention and deportation of Mr Wong made headlines all over the world. 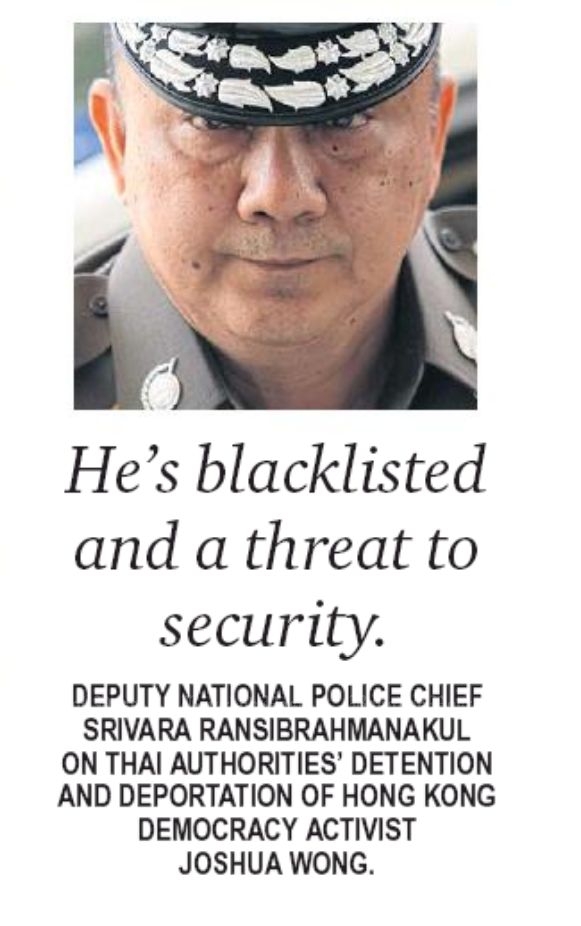 During 2014 protests calling for greater democracy in Hong Kong, Mr Wong was one of the main leaders.

He had been invited to speak at a Chulalongkorn University event marking the 40th anniversary of a deadly massacre of student protesters in the Thai capital.

Immigration officials stopped him on arrival at Suvarnabhumi airport, putting him in a holding cell for 12 hours before sending him back to Hong Kong, saying he couldn't enter because he was on the blacklist.

On his flight back to Hong Kong, Mr Wong wrote on Facebook that his 12-hour detention at immigration police cells at Suvarnabhumi airport was a much scarier experience than his arrest during the demonstration in Hong Kong two years ago.

One of 21 renegade MPs expelled from the ruling Palang Pracharath Party (PPRP) is appealing against the decision, saying he had nothing to do with the moves that led to the group's axeing.

The Ministry of Defence on Saturday assured all political parties will have an equal electioneering opportunity on its premises for the Jan 30 by-election in Bangkok Constituency 9, covering Lak Si and Chatuchak districts.

Thailand coach Miyo Okamoto was left ruing missed opportunities after the Chaba Kaew suffered a 1-0 defeat at the hands of the Philippines in their opening 2022 AFC Women's Asian Cup Group B game in Mumbai, India, on Friday night.