Cabinet boosts rice subsidy to B13,000

The cabinet has decided to increase its latest rice subsidy to 13,000 baht per tonne for Hom Mali paddy in a bid to stem potential protests from rice farmers who were dissatisfied with a proposed subsidy of 11,525 baht.

The decision followed a special meeting by the National Rice Policy Committee which agreed to increase the subsidy a day after initially proposing it.

Commerce Minister Apiradi Tantraporn said the measure, which took effect Tuesday and runs to Feb 28 next year, will cost about 20 billion baht, an increase of 8.6 billion baht, with about 2 million rice farmers expected to take part in the scheme. 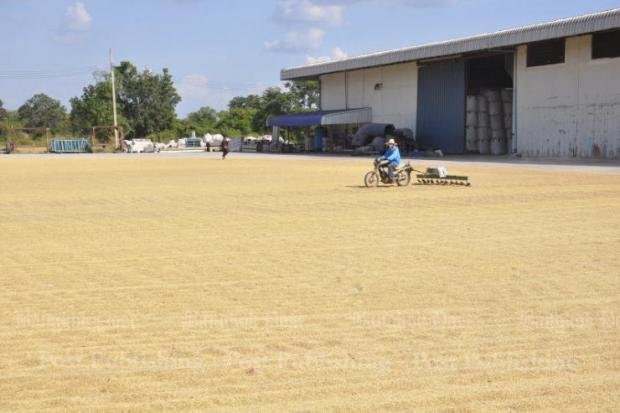 Newly harvested rice is set out for treatment and drying at this northeastern mill. Prime Minister Prayut Chan-o-cha's government now is offering up to 13,000 baht per tonne as a 'subsidy' to farmers. (Post Today photo)

Of the 13,000 baht, 9,500 baht will be paid to farmers to store their paddy in barns for a certain period of time, while the remainder of the subsidy covers other costs, including quality maintenance and storage.

For participating farmers without rice barns, they will receive 9,500 baht per tonne plus 2,000 baht for harvesting and improvement costs, and another 1,500 baht for storage costs.

However, farmers who have no barns to store the paddy will not receive the 1,500-baht storage cost payment.

Ms Apiradi said participating farmers are then expected to redeem their rice within five months of joining the scheme.

She said the rice committee decided to revise the figure after officials concerned including those from the Interior Ministry gathered more information about paddy rice prices.

She also said that the price is expected to change in the future, along with the subsidy rate to compensate for such price fluctuations. 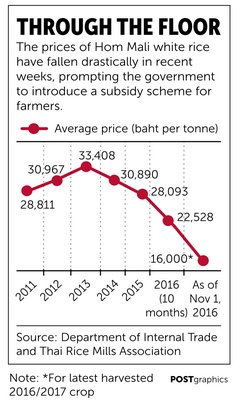 The subsidy increase came after farmer groups disagreed with the original sum of 11,525 baht per tonne.

Prime Minister Prayut Chan-o-cha said the subsidy programme should alleviate hardship for farmers, and pleaded with them for their understanding.

He said the government has a limited budget and needs to strictly adhere to the law. "I hope the measure can more or less help farmers," he said.

He insisted that the subsidy measure is not against the law and is different from the rice-pledging scheme implemented by the Yingluck administration.

Gen Prayut said he has ordered the Agricultural Cooperatives Ministry, the Commerce Ministry and the National Council for Peace and Order (NCPO) to the implement the measure and monitor warehouses for signs of irregularities.

He said the NCPO is investigating reports that politicians and rice millers are manipulating paddy rice prices in a bid to provoke rice farmers to protest against the government.

Gen Prayut insisted a subsidy programme is not a sustainable solution and stressed that all stake holders in the rice production industry will need to make changes and adhere to the rules to help each other.

Deputy Prime Minister Prawit Wongsuwon said the NCPO, provincial governors and police will monitor the situation for signs of defiance among farmers.

He expressed confidence that the rice situation rice will not be politicised.

Government spokesman Sansern Kaewkamnerd said the prime minister has asked security authorities to investigate whether there are people trying to manipulate rice prices.

He said initial findings suggest there are irregular activities in Phichit, with attempts to discredit the government and convince farmers there that the government is mishandling the situation.

About 90% of Hom Mali paddy is due to hit the market this month.

Army chief Chalermchai Sitthisart, also the NCPO's secretary-general, said troops have been dispatched to investigate any instances of price manipulation before the paddy hits the market

He said the army is considering buying rice from farmer cooperatives to help them with distribution, and is sending troops to help farmers with the harvest to save labour costs.

"We are trying to do what we can. Ending the price slump is the government's job," he said.

Meanwhile, Democrat member Wirat Kallayasiri said  the rice price is being manipulated by supporters of ex-premier Yingluck Shinawatra to distort information about the rice-pledging scheme.

"They want to mislead the public into thinking the government is turning a blind eye to their plight. Those who benefited from the rice-pledging scheme are working to discredit the government and provoking farmers," he said.

He called on the government to send local officials to explain the matter to farmers, and to strictly enforce the law against those allegedly trying to distort the market for political gains.

Rawee Rungruang, a rice farmer representative, said farmer groups are concerned about reports that the Bank of Agriculture and Agricultural Cooperatives is refusing to take rice from farmers in the lower part of the North because they grow different grains.