The government's scheme to delay releasing 10 million tonnes of new rice supply to the market, aimed at propping up sinking prices, will use a combined 127 billion baht in loans and subsidies, says the chief of the Bank of Agriculture and Agricultural Cooperatives (BAAC). 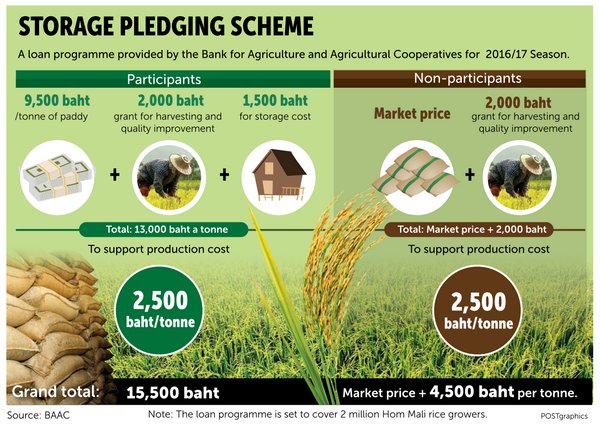 Of the total, 46.7 billion baht will be used to fund the 23.7-billion storage credit scheme for 2 million tonnes of Hom Mali rice, 23 billion for a 1,000-baht-per-rai giveaway to rice growers with a limit of 10 rai per farm household and 80 billion for loans to rice mills and exporters to buy paddy for storage in warehouses for 3-6 months, said BAAC's president Luck Wajananawat.

The BAAC itself will be the source of funding for the 46.7 billion baht loans and subsidies, he said, adding that both the storage credit and cash handout schemes are expected to start by mid-month. 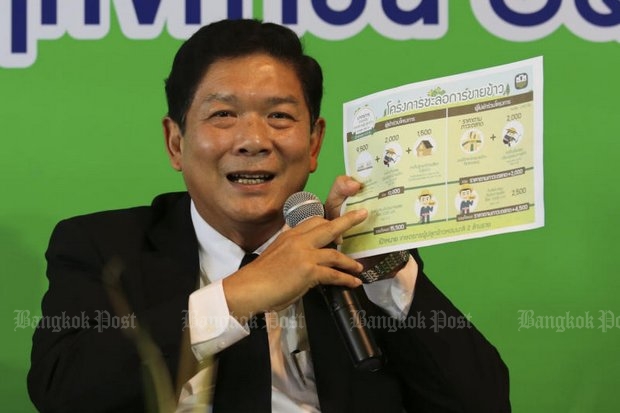 Luck Wajananawat, president of the Bank of Agriculture and Agricultural Cooperatives (BAAC), holds a copy of the infographic reprinted below as he explains the storage credit and cash handout schemes which he says are expected to start by the middle of this month. (Photo by Patipat Janthong)

Only rice farmers who grow the Hom Mali sub-varieties Khao Daw Mali 105 and Gor Kor 15 in 23 provinces in Thailand's North and Northeast are entitled to participate in the storage credit scheme, which is designed to temporarily keep a surplus of 2 million tonnes of Hom Mali rice off of the market.

Participants will receive 13,000 baht per tonne, constituting 9,500 per tonne in credit plus a 2,000 grant for harvesting and improvement costs. Another 1,500 baht grant will be given for storage costs, but farmers will need to store paddy in the barns of their own agricultural cooperatives.

Farmers participating in the scheme will not have to make interest payments for five months as the government will absorb the borrowing costs at 2.2%. Commerce Minister Apiradi Tantraporn earlier estimated that farmers would redeem their rice within five months of joining the scheme.

Non-participating farmers will receive a 2,000 baht grant for harvesting and improvement costs.

When taking the government's cash giveaway of 1,000 baht per rai to all rice farmers, participants will receive a combined 15,500 baht per tonne in loans and grants.

The oversupply has been largely blamed for the steep fall in rice prices, which have hit their lowest level in decades -- 5,000-6,000 baht per tonne for paddy rice and 11,000 baht a tonne for Hom Mali rice.

Prime Minister Prayut Chan-o-cha also recently said that the National Council for Peace and Order (NCPO) is investigating reports that politicians and rice millers are jointly manipulating paddy rice prices in a bid to provoke rice farmers to protest against the government.

Mr Luck cited the Commerce Ministry's explanation for the falling rice price, saying that it stemmed from the price-cutting war in the global market caused by oversupply, while the hefty inventory of Thai rice incurred during the Yingluck Shinawatra administration's rice-pledging scheme had also put pressure on the price.

He forecast that only 20% of the pledged rice might not be redeemed and the BAAC planned to mill such rice and package it for sale through 1,200 branches across the country to prevent the bank's loss from the scheme.

For the 80-billion-baht credit to rice millers and exporters, it will be lent by commercial banks, he said.

The loan is aimed to put off selling 8 million tonnes of paddy rice.