KUALA LUMPUR/YANGON - Malaysian Prime Minister Najib Razak will take part in a rare rally to protest a bloody crackdown on Rohingya Muslims in Myanmar, an official from his office said Tuesday.

Meanwhile, the UN's rights agency said Myanmar's Rohingya may be victims of crimes against humanity, as former UN chief Kofi Annan arrived in the country for a visit that is supposed to include a trip to northern Rakhine.

Malaysia's unprecedented weekend demonstration against the treatment of the Rohingya will take place in an yet-to-be announced location on Sunday.

It will involve politicians, NGOs and "all concerned with the issue" the official said, without giving further details. 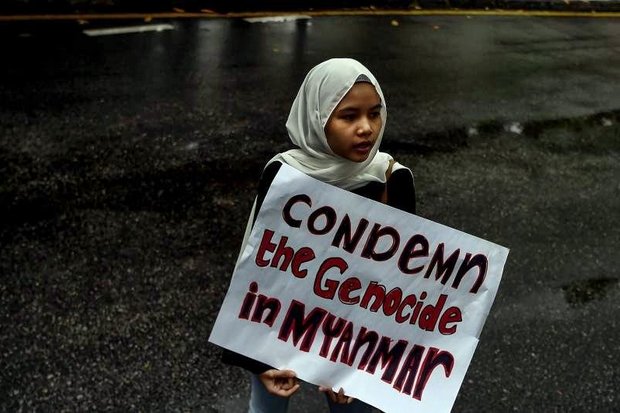 A Malaysian girl holds a placard in last Friday's protest against the persecution of ethnic Rohingya, outside the Myanmar Embassy in Kuala Lumpur. (AFP photo)

However, Malaysia has taken exactly the opposite tack.

Last Friday, the Malaysian foreign ministry summoned the Myanmar ambassador. while around 500 Malaysians and Rohingya marched through a heavy tropical downpour from a Kuala Lumpur mosque to Myanmar's embassy carrying banners denouncing the Rakhine "genocide." 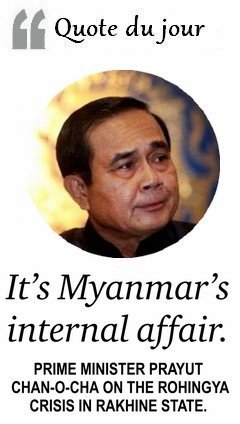 Malaysia's cabinet also issued a statement last week condemning the violence, an unusually strong criticism against a fellow member of Asean, which has a policy of non-interference in member states.

In Thailand on Tuesday, asked about the human rights situation, Prime Minister Prayut Chan-o-cha refused to be drawn out.

"It's Myanmar's internal affair", he said curtly before cutting off any further questions.

"The major gathering on (Sunday) December 4 is to express our concern over the violence taking place on the Rohingya," Deputy Prime Minister Zahid Hamidi was quoted as saying by the Malay Mail Online on Tuesday.

Chong Ja Ian, a political analyst from the National University of Singapore, said Mr Najib's appearance at such a rally will be "odd."

"During last year's migrant crisis, there was criticism but it was oblique and not to this level," he said.

The discovery last year of human-trafficking camps -- and scores of nearby graves -- first in Thailand and then over the border in Malaysia caused shock and revulsion in Southeast Asia.

The camps are believed to have been used by people-smuggling syndicates who move large numbers of impoverished Rohingya out of Myanmar, where they face systematic repression, with most heading for Malaysia.

"These leaders are desperately trying to show their Islamic credentials as they are losing moral legitimacy at home," she said.

Violence in Rakhine -- home to the stateless ethnic group loathed by many of Myanmar's Buddhist majority -- has surged in the last month after security forces poured into the area following a series of attacks on police posts blamed on local militants.

A UN official has said Myanmar is engaged in "ethnic cleansing" of Rohingya Muslims, as reports emerged of troops shooting at villagers as they tried to flee.

The new civilian government under Ms Suu Kyi has rejected the allegations. Officials claim the army is hunting "terrorists" behind raids on police posts last month.

The entire conflict region of Rakhine has been closed to all outsiders, and precise details of killings and reported atrocities are impossible to confirm.

The Myanmar government has lashed out at media reports of rapes and killings, and lodged a protest over a UN official in Bangladesh who said the state was carrying out "ethnic cleansing" of Rohingya.

The army has carried out a bloody crackdown in Rakhine, and thousands of the Muslim minority have flooded over the border into Bangladesh this month, making horrifying claims of gang rape, torture and murder at the hands of security forces.

Some 30,000 have fled their homes and analysis of satellite images by Human Rights Watch found hundreds of buildings in Rohingya villages have been razed.

On Tuesday, the UN OHCHR said Myanmar's treatment of the Rohingya could be tantamount to crimes against humanity, reiterating the findings of a June report.

More than 120,000 Rohingya have been crammed into displacement camps since sectarian violence in 2012. The Rohingya are denied citizenship, healthcare and education and their movements are heavily curbed.

Ms Suu Kyi has forbidden the use of the word "Rohingya" in her presence, including by foreign diplomats and delegations. She has been completely silent on recent events and on Monday cancelled official visits to Indonesia and Singapore, probably because of fear of mass protests against her and her government.

"The [Myanmar] government has largely failed to act on the recommendations made in a report by the UN Human Rights Office... (that) raised the possibility that the pattern of violations against the Rohingya may amount to crimes against humanity," the OHCHR said in its Tuesday statement.

Amid the mounting crisis, former UN chief Annan on Tuesday began a week-long visit to Myanmar that supposedly will include a trip to northern Rakhine.

Ms Suu Kyi in August appointed her fellow Nobel laureate to head a special commission to investigate how to mend bitter religious and ethnic divides that split the impoverished state.

Mr Annan has expressed "deep concern" over the violence in Rakhine, which has seen thousands of angry Muslims take to the streets across Asia in protest.

But Aye Win, a Muslim member of the Rakhine commission, defended Ms Suu Kyi's handling of the crisis.

"What she has inherited is a dump of rubbish, a junk yard," he said Tuesday, pointing out that the army retains control of security and defence under a constitution written under the former junta.

"Her hands are tied -- she can't do anything. What she is doing is trying to talk and negotiate and build trust" with the army, he added.