The bill is expected to be briefly deliberated in its third and final reading, then passed by the NLA Friday. 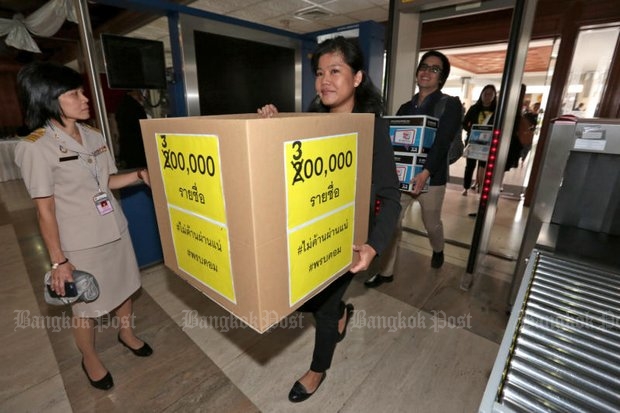 The petition was submitted with 300,000 signatures objecting to the bill, prompting the NLA and the government to try to hose down the controversy. The petition can be viewed or signed at this Change.org page.

Critics say the amendment is primarily designed to make way for a single internet gateway.

TNN founder, Sarinee Achavaknuntakul, said the network wanted the bill to be put on hold due to its lack of clarity and called for revisions of certain parts of the draft law.

"We want the NLA to revise the bill and listen more to public opinion," Ms Sarinee said.

"But if the NLA insists on passing the bill, the network will continue following up on the law and ask the new government to consider revising it."

She listed Sections 14, 15, 18, 19, 20 and 26 of the bill as those that need to be rewritten and made more concise in order to ensure people's human rights will be protected under the new draft law.

She said Section 14 in particular needed to be changed to exclude defamation offences, otherwise, this particular part of the bill could be abused as a tool to breach human rights.

Due to its ambiguity, the bill could be abused by those interpreting it in a way that may justify their action, such as shutting down a website by state officials who will not have to wait for a court order to execute such legal action, according to Ms Sarinee.

One of the most controversial issues surrounding the bill is that a five-member committee will be set up to screen computer information even if it does not violate any law but is considered a breach of "public morals". 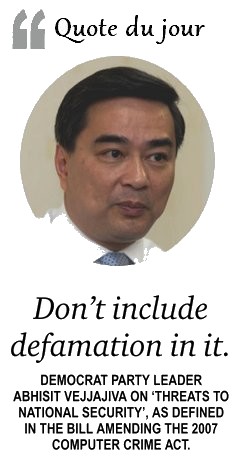 The panel can recommend authorities ask for a court order to remove or block the content. Pol Gen Chatchawal Suksomjit, who chairs an NLA committee responsible for drafting the amendment bill, Thursday reiterated that the proposed amendments are intended to improve the law and provide clearer details.

Despite its broad definition, the term "a breach of public morals", the entity that will decide which act fits into this term is the court, not the five-member screening panel that will be appointed by the government, he said.

On Wednesday, he gave an explanation regarding Section 14 of the bill, saying the section removes libel offences and focuses only on acts of fraud and fabrication.

Prime Minister Prayut Chan-o-cha, meanwhile, responded to the move opposing the bill by saying one should never attempt to confuse the public by misleading people into thinking the bill is linked to the single internet gateway.

"If everyone truly understands the bill, he or she will understand that not every person will be affected by this law," he said.

"The law will not simply authorise the government to spy on everyone's secrets."

Pol Gen Chatchawal also insisted that the bill has nothing to do with the single gateway matter as that was a different issue.

In another development, the Thammasat University Student Council issued a statement opposing the bill, saying the draft law contains wording that has sparked public concerns over possible negative impacts of the draft law on public rights and freedom.

Democrat Party leader Abhisit Vejjajiva shared a similar view, saying many members of the public had no confidence in the bill and feared it could be abused by people in power.

The government should find a point of balance between maintaining national security and protecting the rights of the people, he said.

A majority of the latest Covid-19 related deaths attributed to close contact with infected relatives, with victims aged from 45 to 100 years.