Prayut says corruption cases 'all in the past'

Prime Minister Prayut: Everything happened in the past. (Photo by Thanarak Khunton)

The government has failed to improve the country's latest corruption ranking but Prime Minister Prayut Chan-o-cha has appealed for no judgement to be passed on the regime's ability to tackle graft.

The prime minister said a series of recent corruption scandals involving Thailand had occurred in the past.

Gen Prayut made the comments after Thailand's corruption ranking plummeted, from 76th in 2015 to 101st place in the 176 countries in the 2016 assessment by independent watchdog Transparency International.

In its Corruption Perceptions Index (CPI) 2016, Thailand's score dropped from 38 points out of 100 in the previous year to 35 as government repression, lack of independent oversight, and a deterioration of rights eroded public confidence in the country.

Thailand's ranking fell to be equal with Gabon, Niger, Peru, the Philippines, East Timor, and Trinidad and Tobago.

The prime minister said that overall the country's rankings in several criteria "were not all that bad". Some of them have improved, while others have gone down.

"Don't forget that everything [corruption scandals] happened in the past," Gen Prayut said, while adding that he has now ordered probes into those corruption cases.

Anti-graft bodies have also launched their own inquiries and he had never stood in the way of their investigations, Gen Prayut said.

The plummeting of the country's corruption ranking came as the government has come under pressure to launch probes into several bribery scandals exposed by international agencies.

They include the Rolls-Royce bribery scandal involving the purchase of engines for Thai Airways International aircraft spanning from 1991 to 2005.

Rolls-Royce admitted to bribing agents of the Thai state and employees of THAI. The British engineering firm also admitted it paid bribes to PTT group.

Three state enterprises -- the Metropolitan Electricity Authority, the Provincial Electricity Authority and TOT Plc -- have also become similarly embroiled in another bribery scandal after the US Department of Justice announced it has taken legal action against Kentucky-based General Cable Corporation, a manufacturer and distributor of cables and wires.

Gen Prayut also cited astrological predictions that things that have been concealed will all be revealed. 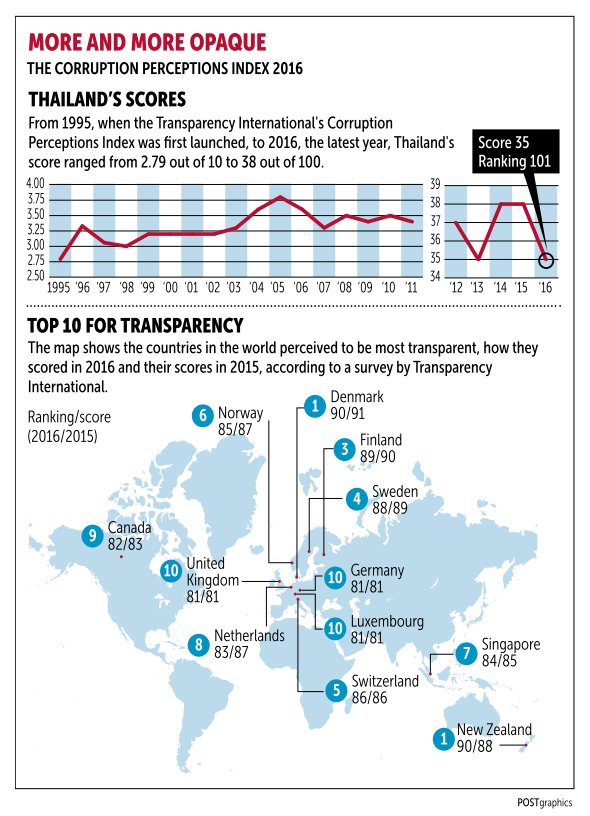 "Astrologers said that it is the year of exposing the truth, but I am not concerned about it as I am always ready for scrutiny," Gen Prayut said.

"When any information has been revealed, inquiries must be carried out. But don't try to dwell too much on it. We have to consider both positives and negative impacts."

He said that astrologers also predicted that "bad guys will be punished this year".

"Therefore, be good and follow the principles of moral conduct, work for the country, stay away from corruption," the prime minister said. 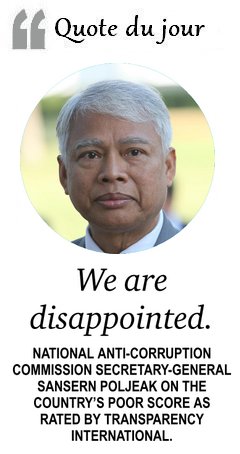 The NACC expected Thailand to have scored more than 38 points, Mr Sansern said, while noting that "being a democratic country" has also been used in calculating the CPI score this year.

Pramon Sutivong, chairman of the Anti-Corruption Organisation of Thailand, said he was disappointed with the result as he believed his group has done a lot to improve Thailand's transparency. However, his group is trying to find weak points that need improvement.

He said a new group of respondents were included in the survey, and they put a lot of emphasis on the political aspects of the evaluated country.

However, improvements in other aspects were not enough to improve the score, he said.

He was referring to the corruption index report released by the University of the Thai Chamber of Commerce last week that saw an improvement as the survey of 2,400 respondents found the rate of "tea money" payments had dropped to the lowest level in five years.