Media lashes out at 'control' moves

Thirty media organisations are stepping up moves against a bill they say will pave the way for the regime to control the media.

The National Reform Steering Assembly's (NRSA) media reform steering panel, which is working on the bill, remains adamant the measure is not designed to constrain freedom of the press.

Media groups on Sunday slammed the bill, saying it is not based on principles of free press.

Instead, they say, the document is crafted to allow state interference and control of the media.

The measure is called the "bill on rights protection, ethical promotion and standards of media professionals", a name called Orwellian by some.

A crucial point of concern involves the proposed "national media profession council" which would have government members and is empowered to penalise media outlets who violate codes of conduct.

The council is made of 13 members, four of whom are permanent secretaries of finance, digital economy and society, culture, and the Office of the PM.

The proposed participation of the permanent secretaries has sparked criticism that they are the channel of political power to meddle in the media.

Another involves a requirement that every media professional must be licensed by the government.

The legislation draft also runs contrary to the constitution that calls for self-regulation and independence from government control or interference, according to the groups.

If passed into law, it will directly affect the media's role in scrutinising the state and hinder the public's right to gain access to information.

The groups are demanding the NRSA order a review of the draft law and are threatening to escalate their campaign if the reform body presses ahead with it.

They insist media organisations have been improving self-regulation for greater accountability and transparency. 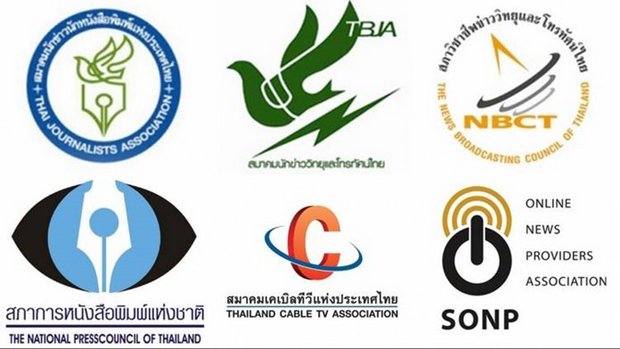 All six major press groups in Thailand have opposed the junta assembly's plans to 'reform' the media.

"We're not against ethical regulations but they should be self-regulation. The bill will make way for political intervention because the permanent secretaries are appointed by politicians," said CTJ president Thepchai Yong.

He said the bill which empowers the council to order and guide media reform is tantamount to signing a blank cheque.

If the media is exploited as a political tool, press outlets "will be under tremendous pressure".

"It's scary that the people the media are examining will be scrutinising the media and they have the authority to approve and revoke licences ... so we have to warn the society that there is an attempt to hand it [regulatory role] to politicians," he said.

Banyat Tasaneeyavej, a former Bangkok Post senior reporter and former president of the TJA, said the press outlets need to consolidate to fight against this new push for media control.

"This is a huge step back. It totally goes against reforms," she said.

Wisuth Komwatcharapong, president of the NBCT, said government presence on the media council is unacceptable.

The NRSA's move has raised questions among media professionals of whether political influence is involved.

Prime Minister Prayut Chan-o-cha has often said the media reports only negative news of the government, not its achievements. He had said one problem is the media have failed to regulate itself.

The government has sent its spokesman Lt Gen Sansern Kaewkamnerd to control the Public Relations Department that owns the NBT, or Channel 11 TV station, and number of radio stations nationwide.

ACM Kanit Suwannate, chairman of the NRSA's media reform steering panel, said the draft will be more beneficial for the media than restricting its work.

"I agree with the philosophy and principle of freedom of the press. I am not touching it. This law will not limit press freedom," he said.

The regulations including the conditions for issuing or revoking licences for media professionals will be up to the national media council which will be set up later according to this law.

"We don't limit what, where or how [the media] cover stories," he said.

"It's your [national press council's] business to set up the rules, not mine. I don't even start proposing about what rules to use.

"Meanwhile, the number of government officials to sit in this council is only four, while five representatives from the media will be in.

"The media can choose among themselves and the number of council members still outnumbers government officials."

ACM Kanit said the permanent secretary of finance was proposed so he can help watching over the budget allocated for the national media council, which has been recommended at 50-150 million baht annually.

Meanwhile, the permanent secretary of the Digital Economy and Society Ministry was proposed as the agency is in charge of communication technology.

"The PM's Office permanent secretary is in charge of the Public Relations Department, he said.

PATTANI: An official at the provincial land office has been arrested for allegedly demanding a 120,000-baht bribe in exchange for issuing land title deeds.