NRSA refuses to back down on media bill
Thailand
Politics

NRSA refuses to back down on media bill

Deputy Prime Minister and Defence Minister Prawit Wongsuwon told reporters not to get so excited over pending laws to control the media. (Photo by Pattanapong Hirunard)

The National Reform Steering Assembly's media reform steering panel refused Monday to back down on a controversial bill regulating the media industry, saying the proposed law would allow oversight by outsiders without sacrificing self-regulation.

Deputy Prime Minister Prawit Wongsuwon, meanwhile, urged media organisations not to get overexcited because there was a long way to go before the bill can be passed into law.

Their move came after a coalition of 30 media groups announced a public stance against the NRSA-sponsored "bill on rights protection, ethical promotion and standards of media professionals".

The draft legislation hit a nerve with members of the media as it called for the establishment of a 13-member "national media profession council" made up of five representatives from the media, four from the state and four from other sectors to provide regulatory oversight with the power to approve and revoke licences for journalists. 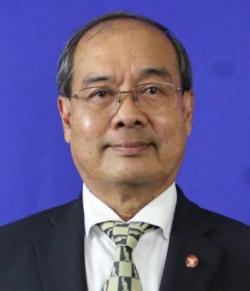 Kanit: 'Industry better off with outsiders'

Media groups are concerned such governmental oversight would be an attack on the freedom of the press. Of the 13 members, four would be the permanent secretaries of finance, digital economy and society, culture, and the office of the prime minister.

ACM Kanit Suwannate, the NRSA panel chairman, said the bill will be submitted to NRSA whips on Thursday and the gist of it is unlikely to be altered.

The panel chairman insisted the media industry would be better off if the "national media profession council" comprised outsiders, instead of being made up exclusively of their own kind.

He said the media profession council has been the subject of dispute for more than 20 years and it was picked up by the committee after several rounds of talks with parties concerned including media representatives.

Panel deputy chairman Pol Maj Gen Pisit Pao-in said the bill will not take away self-regulation by the media and the council will get involved when disputes over media practices cannot be settled.

"Self-regulation remains the first order, followed by examination by media organisations. And if those involved in a dispute aren't pleased, the council will step in," he said.

Apichart Chongsakul, the panel spokesman, expressed confidence that media representatives on the council would not allow unscrupulous practices under their watch.

He also urged media organisations not to pass judgement on non-media council members, especially state representatives whose expertise might provide great contributions to the industry.

Gen Prawit allayed concerns about state control of the media, saying the regime had no intention of exerting control and urged the press to do a proper job.

Thepchai Yong, veteran journalist and president of the Confederation of Thai Journalists, said Monday that media groups would submit an open letter to the NRSA on Thursday against the proposed bill.

He dismissed as untrue any claim that media representatives agreed with the bill's content, especially on government oversight and the council's authority to grant and revoke licences.

"There shouldn't be a set of rules to govern how news reporting or investigative reporting should be conducted," he said.

He insisted government representation on the council was not a checks-and-balances mechanism as claimed by the NRSA panel.