The spokesman for Meechai Ruchupan (left) and his Constitution Drafting Committee has strongly opposed efforts to pass a bill to regulate the press proposed by a committee under chairman Thinnaphan Nakhata (right) of the National Reform Steering Assembly (NRSA). (File photos)

Chartchai Na Chiangmai, who is also a CDC spokesman, said the charter writers have laid down principles for the media to regulate themselves and set their own ethical framework.

Section 35 of the new constitution clearly states that media professionals have the right to present information, and express opinions in accordance with professional ethics, he said, adding that this right cannot be breached. Censorship is not allowed either, except during wartime, he said.

Mr Chartchai insisted that the new charter does not call for any national media profession council to control the media. He said he did not believe the state should meddle with the media. 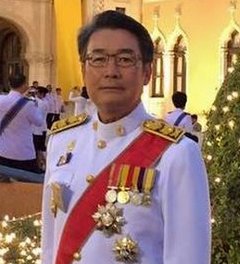 Chartchai: Media must regulate themselves

Media groups have slammed the NRSA-sponsored "bill on rights protection, ethical promotion and standards of media professionals", saying it is not based on principles of a free press, but designed to allow state interference and control of the media.

A crucial point of concern involves the proposed "national media profession council" which would have senior government officials and is empowered to penalise media outlets who violate codes of conduct.

The council comprises 13 members, four of whom are permanent secretaries of finance, digital economy and society, culture, and the Prime Minister's Office.

The proposed participation of the permanent secretaries has sparked criticism that they will serve as a conduit for political meddling in the media.

Mr Chartchai said that Section 40 of the charter stipulates that individuals' freedom and right to pursue a career must not be violated, while legislation would be issued later only to protect and defend national security and the economy, promote fair competition, prevent monopolies, and protect consumers.

But if the proposed media bill eventually becomes law, opponents of the law can challenge it in the Constitutional Court, Mr Chartchai said.

Previously, ACM Kanit Suwannate, chairman of the NRSA's media reform steering panel, said that having four permanent secretaries on the national media professional council should have a positive effect as they could help direct budget allocations to improve the media industry. The permanent secretary of finance, for example, could help keep watch over the budget allocated for the national media council, which has been recommended at 50-150 million baht annually.

But Mr Chartchai warned that this could also breach the constitution, which prohibits state agencies from using their budgets to support the media, except for advertisement payments.

CDC chairman Meechai Ruchupan echoed the view that the new constitution intends members of the media to regulate themselves.

"In fact, the media should be allowed to draw up their own law. When others are let to draft the law, they cannot help but interfere," Mr Meechai said.

Still, Prime Minister Prayut Chan-o-cha said Tuesday the bill is not intended to control the media, but to set standards.

While media organisations have failed to regulate themselves, the bill is designed to improve their professional ethics, not to restrict them, the prime minister said, adding that the media bill is part of the government's reforms covering 11 issues including media reform.

"Of the 13 council members, only four are government officials. How could they boss things around? As with other professions, the media must be subject to professional ethics controls, not controls on news reporting. We all have to go through reforms," Gen Prayut said.

He also allayed concerns that media organisations would be shut down if the bill becomes law, saying there will be legal procedures which could not be interfered with by the state.

Somkiat Tangkitvanich, president of the Thailand Development Research Institute (TDRI), rejected claims by ACM Kanit that the bill has passed a public hearing from the TDRI and other parties concerned.

Mr Somkiat said he and TDRI researchers had played no role in deliberating the bill and had not yet seen its content.

"The solution to this problem should come from a friendly and broad-minded discussion between the media and the NRSA panel," he said.