A pair of high-profile attacks charged that the military regime uses excessive legal action to suppress and intimidate civil society and peaceful critics.

A special 30-page report by Amnesty International, "They Cannot Keep Us Quiet" was officially published on Wednesday. It is sub-titled "The criminalization of activists, human rights defenders and others in Thailand." (continues below) 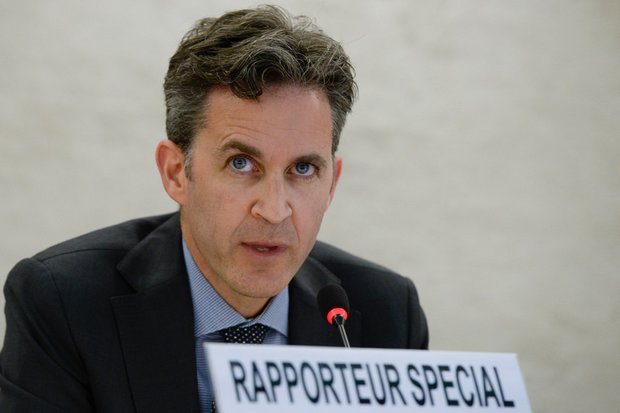 David Kaye, a former professor at the law school of the University of California, Irvine, is the UN's Special Rapporteur on the promotion and protection of the right to freedom of opinion and expression.

"Thai authorities are waging a campaign to criminalise and punish dissent by targeting civil society and political activists who peacefully exercise their rights to freedom of expression and assembly," the Amnesty report said.

It can be read or downloaded from the Amnesty International website.

It was released hours after David Kaye, a US ex-professor and now the UN Special Rapporteur on freedom of opinion and expression, held meetings on Tuesday and then launched a scathing attack on what he called misuse of laws prohibiting defamation of the monarchy.

"The lese-majeste provision of the Thai Criminal Code is incompatible with international human rights law,"  Mr Kaye said at a media briefing.

"Lese-majeste provisions have no place in a democratic country. I urge the authorities of Thailand to take steps to revise the country’s Criminal Code and to repeal the law that establishes a justification for criminal prosecution."

Amnesty International was equally critical of what the two foreign critics called misuse of Section 112 of the Penal Code, or lese majeste.

"This provision has been broadly applied to stifle discourse regarding the monarchy in Thailand," Amnesty claimed. "It has also been applied ... in a highly arbitrary manner to target peaceful activists and their families." 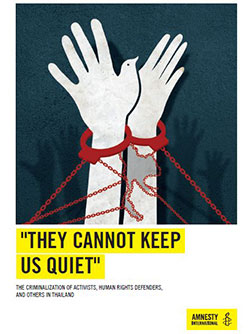 The 30-page special report on Thailand by Amnesty International was released Wednesday.

The Amnesty report charged that the government had put "civil society under attack" in an effort to criminalise and punish dissent by targeting peaceful activists.

It cited six other laws in addition to lese majeste it claimed are misused by the regime to intimidate or punish dissidents, including sedition and criminal defamation. But AI said three laws brought in by the junta were also abused: the Referendum Act, the Public Assembly Act and Head of NCPO Order No.3/2558, decreed in April, 2015, granting the military "repressive powers" in law enforcement.

Both foreign critics focussed on what they said was excessive effort by the junta to stifle speech and public debate.

And both singled out the refusal of the regime to back bail for dissident Jatupat Boonpatararaksa, better known as Pai Daodin.

"I am concerned about reports that the court hearing on his bail took place behind closed doors, in contradiction to the right to a fair and public hearing," Mr Kaye said.

But the Amnesty International report took a different tack, noting the regime was using a combination of new and old laws to intimidate.

Apart from Mr Jatupat, the Amnesty report said, "By and large, Thai authorities have not sought to continuously detain activists and others until they stand trial... The threat of prosecution has had a chilling effect on civil society activity".

Amnesty cited a high cost simply from being charged by the junta. "Individuals have faced mounting legal costs and have been drawn away from their work by frequent trips to distant courts and police stations," it noted.