Police believe the huge cache of mostly military weapons retrieved on Saturday were intended to be used against authorities who had laid siege to Wat Phra Dhammakaya, including a plot to kill Prime Minister Prayut Chan-o-cha.

National police chief Chakthip Chaijinda said Sunday that some of the seized weapons had been taken from soldiers during the violent red-shirt political rallies in mid-town Bangkok in 2010. 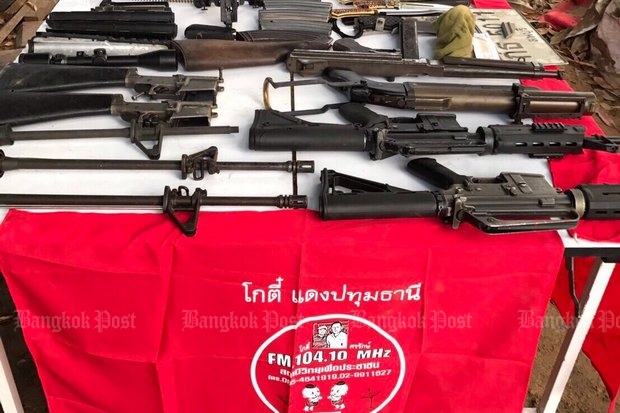 A massive cache of mostly military arms, ammunition and explosives, laid out on a table suggesting a link to hardcore red shirt Wuthipong 'Kotee' Kochathamakun is the key element in a plot to kill the prime minister, according to the national police chief. (Photo by Apichit Jinakul)

The weapons were being prepared for a potential attack against officers that had surrounded and were searching Wat Phra Dhammakaya in Pathum Thani's Khlong Luang district, he said.

Specifically, he claimed, the weapons were prepared to "harm or assassinate" the country's leader, Gen Prayut, he claimed.

A YouTube audio clip by a man claiming to be Kotee denied the arms belonged to him. Weng Tojirakarn, co-leader of the United Front for Democracy against Dictatorship (UDD), said the operation was a disinformation campaign to frame red shirts as an armed group. 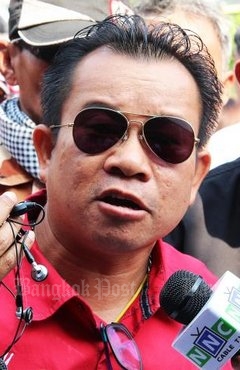 Mr Wuthipong is believed to be holed up in an "neighbouring country", known to be Cambodia although the police chief refused to name it. Kotee has allegedly played a leading role in gathering weapons to support the temple and as such must be considered a threat to national security, Pol Gen Chakthip said.

Mr Wuthipong, a Pathum Thani-based community radio DJ before he became notorious over clashes with the military, is wanted on a lese majeste charge. A warrant was issued for his arrest in April, 2014.

The charge came two months after a bitter attack on then-army commander Gen Prayut by Kotee in a radio broadcast. He said Gen Prayut had ordered his death, and he left the country for Cambodia on Feb 1, 2014, the day before an attempted national election by the government of then-prime minister Yingluck Shinawatra.

Pol Gen Chakthip said police had tried to contact "the neighbouring country" (Cambodia) for Mr Wuthipong's extradition, but had received no helpful reply.

"An investigation found people in Kotee's group were preparing to use weapons to assassinate the government's leading figures including Gen Prayut," Pol Gen Chakthip said Sunday.

"We found a rifle with a scope. We guarantee that this is not to shoot at birds but was going to be used to assassinate the leader of the country," said Pol Gen Chakthip.

"If the government uses forces to suppress people in Wat Phra Dhammakaya, the armed group would be ready to help the temple and hurt officers."

Pol Gen Chakthip said Mr Wuthipong has played a role in inciting people to fight against the monarchy, and he is a supporter of Wat Phra Dhammakaya.

Officials found people in Mr Wuthipong's network had been entering and leaving the temple prior to the siege and had been meeting him in the neighbouring country.

Pol Gen Chakthip was speaking at a news conference called Sunday to expand on raids on nine locations in seven provinces as part of follow-up to the seizure of the war weapons on Saturday morning. 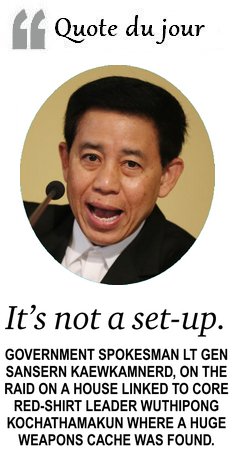 Nine people were arrested during Saturday's raids, all of whom were in Mr Wuthipong's network, according to officers.

Mr Wuthipong, meanwhile, tried to mobilise Wat Phra Dhammakaya's followers to fight officers who were searching the temple and had formed a group in preparation for a clash, he said.

One of the nine suspects was found to have showed up to the temple before, Pol Maj Gen Sombat said.

Pol Col Paisit said police and the DSI have always suspected that political groups have operated in Wat Phra Dhammakaya and intelligence from both agencies points to allegations they had tried to cause unrest.

Meanwhile, a man who claimed to be Mr Wuthipong insisted the huge cache of weapons retrieved on Saturday from the Pathum Thani house did not belong to him, saying the seizure was only staged to incriminate people in his network.

Speaking via YouTube in an audio recording, he said he felt sorry for his aide who was arrested during the raid. This framed charge is an example of injustice, which occurs again and again in Thailand, he said. "Why would I accumulate the weapons like that in the heart of the city?" asked the man, whose identity could not be confirmed.

Weng Tojirakarn, co-leader of the United Front for Democracy against Dictatorship (UDD), questioned why officers only now decided to search the house, three years after Mr Wuthipong faced charges.

Authorities were attempting to link the discovery of the weapons with Wat Phra Dhammakaya and the UDD without evidence, he said, adding it was clear that efforts have been made to frame the red-shirts as an armed group. Mr Weng insisted Mr Wuthipong had nothing to do with the UDD movement.

Government spokesman Sansern Kaewkamnerd said the prime minister instructed officials to proceed with the case and bring the owners of the seized weapons to justice.

Below: Police searched a container yard in Bang Phli district of Samut Prakan on Sunday after receiving a tip more arms could be found, but the search turned up nothing. (Photo by Wichan Charoenkiatpakul) 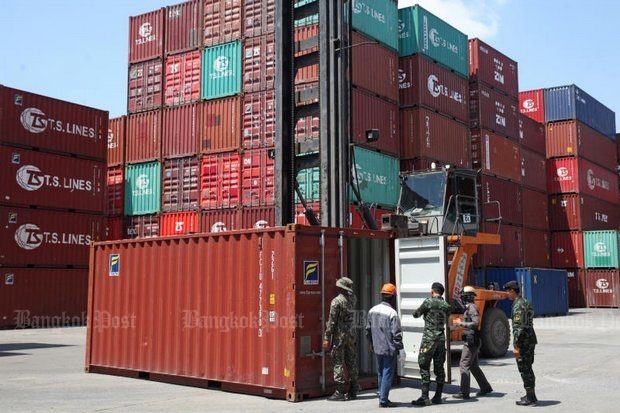