You say you want a revolution plaque -- well, it's gone
Thailand
General

You say you want a revolution plaque -- well, it's gone

The missing memorial plaque of the Siamese Revolution of 1932 has been replaced with a new plaque t the Royal Plaza near the King Rama V equestrian statue.

The disappearance of the memorial plaque of the 1932 Siamese Revolution at the Royal Plaza, which has since been replaced by a new one, remains shrouded in mystery. 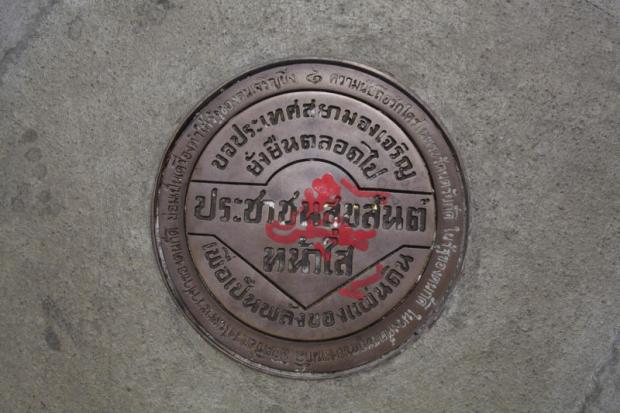 Some activists have cried foul over the missing metal plaque though the government has insisted it had nothing to do with its disappearance.

The issue came to light after the matter went viral on social media on Friday.

Government spokesman Sansern Kaewkamnerd on Saturday said he was not aware of the removal of the memorial plaque which had been fitted into the road surface near the King Rama V equestrian statue at the Royal Plaza in Bangkok's Dusit district.

The memorial plaque made of brass bears an inscription reading: "Here at dawn on June 24, 1932, Khana Ratsadon brings into being the constitution for the sake of the country's prosperity." The inscription on the metal plaque's surface had worn off as it had been run over many times by vehicles passing by on the road.

Khana Ratsadon (People's Party) was a group of military and civil officers, which carried out the 1932 revolution on June 24, 1932, changing the country's absolute monarchy to a constitutional monarchy.

The plaque has been mysteriously replaced with a new one which bears an inscription reading: "May Siam be blessed with prosperity forever. May the people be happy and cheerful and become the strength of the country."

The rim around the surface of the new plaque also bears another inscription reading: "The respect for Phra Ratanattaya (The Three Jewels -- Buddha, Dhamma, Sangha), the state, one's family, and the faithfulness towards one's king will all contribute to the prosperity of one's state."

According to a Facebook post titled "Moot Khana Ratsadon" (Khana Ratsadon's plaque), the plaque could have been removed during the renovation of the King Rama V statue early this month.

In an interview with Voice TV, Sasatrin Tansun, a political scientist lecturer at Kasetsart University, also said that his students did research on the memorial plaque and they found the plaque was still in its place on April 1-2.

The students later went to examine the plaque again on April 8, only to find that the old plaque has been replaced with a new one, Mr Sasatrin said. He noted that the replacement could possibly have occurred between April 3-7.

According to historians, the memorial plaque was expected to be made about nine years after the 1932 Siamese Revolution when the government at the time designated June 24 as National Day.

The memorial plaque was once removed during the tenure of former prime minister and military strongman Field Marshal Sarit Thanarat. It was kept by the parliament's secretary-general at the time before it was reinstated following the death of that prime minister.

The plaque had become a gathering point for political activists who came to observe the anniversary of the 1932 revolution annually.

Banlue Suksai, the director of the Dusit district office, said the district did not remove the memorial plaque. The district will inform the public once details are clear as to who or which agency made the replacement.

Anant Chuchote, the director-general of the Fine Arts Department, said the department knew nothing about the missing plaque and that the department was only responsible for looking after King Rama V's equestrian statue.

Maj Puttinart Paholpolpayuhasena, the 78-year-old son of Phraya Phahonphonphayuhasena who was part of the Khana Ratsadon, told the Bangkok Post that the position of the memorial plaque was where his father read out the group's declaration on the 1932 revolution at dawn on June 24, 1932.

He said his father, who also served as the country's 2nd prime minister, and the Khana Ratsadon staked their lives on democracy because if they had failed in their attempt, they would have become rebels and been executed.