The regime should be able to wield full power in running the country so that it can deal with difficult issues ahead of the election next year, says Constitution Drafting Committee (CDC) chairman Meechai Ruchupan. 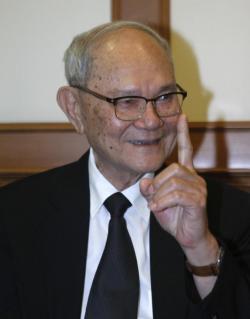 Meechai: Full power must be wielded.

His comment came amid calls by some politicians who said the regime, after the constitution is enforced, should refrain from exercising its power under the wide-reaching Section 44 of the interim charter, which was carried over and is now incorporated into Section 265 of the current charter. They said the section limits people's freedom.

There is still more than one year that the government and National Council for Peace and Order have to work and they should be able to resort to "their existing work mechanism", said Mr Meechai.

He said the regime should be equipped with such power to lay the foundations or deal with issues which normal administrations would see are difficult to tackle.

The new charter was royally endorsed and officially promulgated on April 6.

During the transition period, the government should be able to wield full power, Mr Meechai said.

After the charter comes into effect, the government would have 18 months to work before the election in line with the constitution, he said, adding that certain key issues must be dealt with by the incumbent government.

Several reform issues may initially be unpopular but they would subsequently yield good results and it is important to have a government that can make swift decisions to deal with such matters, the CDC chairman said.

"Within a year or more, the country's strategic plan must be completed and the reform plan clearly drawn up to show how to reach the target," said Mr Meechai.

He said police reform has to be concluded within a year, while education reform could be undertaken after the new administration is formed.

The CDC chairman insisted the new charter gives more details about when there is a need to restrict the rights or liberties of people, saying there is a time frame for such an approach with a request to indicate necessity and reasons behind the move.

As the circumstances change, the given reasons may no longer be valid and the restrictions would have to be lifted, he said.

He insisted the 10 organic laws being formulated by the CDC will not be hindered by Section 77 of the new charter, which stipulates public hearings must be held before the new legislation is rolled out.