City Hall claims it put cameras up at the Royal Plaza but then took them down on March 31 while it was upgrading traffic lights.

A group of activists attempted Wednesday to check security camera footage at the Royal Plaza to look for clues about the disappearance of the 1932 Siamese Revolution plaque, only to be told the cameras had been removed on March 31.

About 20 activists of the anti-coup New Democracy Movement showed up Wednesday at the Bangkok Metropolitan Administration (BMA) to submit a letter asking permission to examine footage from closed-circuit television cameras at the Royal Plaza.

The group arrived at City Hall after they filed a complaint at Dusit district police station asking them to track down the missing plaque. Yutthapan Meechai, secretary to Bangkok governor, received their request.

After 30 minutes of talks, Mr Yutthapan and the group held a press conference. He said the BMA had no objection to their request as they had filed a complaint with police.

The BMA has clear rules allowing access to camera footage if the party making a request provides a copy of a complaint filed with police about the issue concerned.

Aphisit Sapnapapan, a member of the group, said the BMA had cooperated with the group, though BMA authorities told them that the 11 CCTV cameras that were situated at traffic lights around the Royal Plaza had been removed on March 31 when City Hall workers began work to improve traffic lights in the area.

Mr Aphisit said the BMA allowed the group to see the 11 CCTV cameras that had been removed on March 31, and the cameras had no footage in them.

However, the group has also submitted a request to check footage from other cameras in nearby areas, he said, adding that the group suspected the memorial plaque may have disappeared between April 2-8. 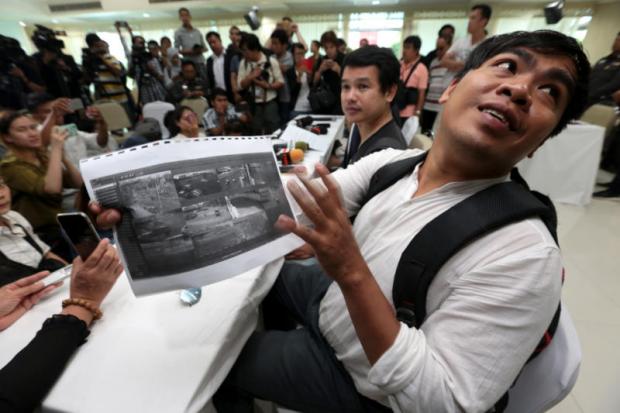 Activists of the New Democracy Movement ask to check the footage but are told by officials that 11 of them installed atop traffic light poles were removed on March 31. (Photo by Chanat Katanyu)

However, Nattha Mahatthana, another member of the group, noted that even though the 11 cameras had been removed, there must have been eyewitnesses to the disappearance of the cameras because the Royal Plaza is an area where police and soldiers are usually deployed to maintain security.

On Tuesday, police set up barricades around the spot where a new plaque has replaced the old memorial plaque at the Royal Plaza, to keep out crowds of people who had turned up to take pictures. 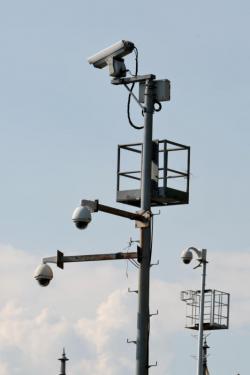 City Hall-owned security cameras installed near the Royal Plaza, similar to the one in the photo, have become an issue in the disappearance of the 1932 Siamese Revolution plague as activists of the New Democracy Movement asked to check the footage but were told by officials that 11 of them atop traffic light poles were removed on March 31. (Photo by Chanat Katanyu)

Deputy Prime Minister Wissanu Krea-ngam said people can lodge complaints with police to investigate the disappearance of the plaque if they do it as "good citizens", which is allowed by the law.

Mr Wissanu, also a legal expert, said that under the law, a damaged party can lodge a complaint whereas others also have the right to do so as good citizens.

He was responding to remarks made by deputy national police chief Srivara Ransibrahmanakul that police would help track down the missing memorial plaque only if its real owner shows up to file a complaint.

On Monday, Mr Watana wrote a post on his Facebook page saying the missing memorial plaque is an object protected by the law on ancient sites, ancient objects, art objects and national museums; therefore, it is considered a national asset.

Mr Watana also wrote that the penalty for those who took the memorial plaque is a jail term of up to seven years and/or a fine of up to 700,000 baht.

But the TSCD rejected the assertions, saying the information posted by Mr Watana was false and could lead to misunderstandings among some groups, and it could also be deemed as intending to stir up public disturbances, Pol Gen Srivara said.

Political activist Srisuwan Janya, secretary-general of the Association for the Protection of the Constitution, was released last night from the 11th Military Circle in Bangkok's Dusit district after he was taken there for talks in the morning.

Mr Srisuwan had previously shown up at the Government House public service centre to submit a letter to Gen Prayut asking him to look for the plaque. He said the military told him they wanted him to support efforts to foster national reconciliation.

The brass plaque marks the spot where the Khana Ratsadon group announced the revolution in 1932, turning the country from an absolute monarchy to a constitutional one.