Facebook, supposedly on behalf of CEO Mark Zuckerberg has affirmed it will remove "illegal" content if requested by government, but all 600 controversial Thailand pages were available Tuesday, including the three at the top of the government hit list. (File photo; Bangkok Post graphic)

Facebook Inc has agreed to continue to consider the Thai government's requests to restrict local access to content on its site found to be in violation of the country's laws.

Tispa is responsible for 95% of internet traffic in Thailand, and consists of 19 internet service providers as well as an international internet gateway (IIG).

The Criminal Court had ordered some 6,900 web pages or websites to be shut down since 2015, with the NBTC last week ordering all ISPs and IIG to block illicit web pages and content deemed illegal by the court within the next seven days, or risk having their licences revoked.

"When we receive such a request, it is scrutinised to determine if the specified content does indeed violate local laws," a Facebook spokesman, who declined to be named, told the Bangkok Post via email.

"If we determine that it does, then we make it unavailable in the relevant country or territory and notify people who try to access it why it is restricted," he added.

But there are still around 600 pages, mostly on Facebook, that local ISPs cannot block because they are encrypted, with the host servers located abroad. 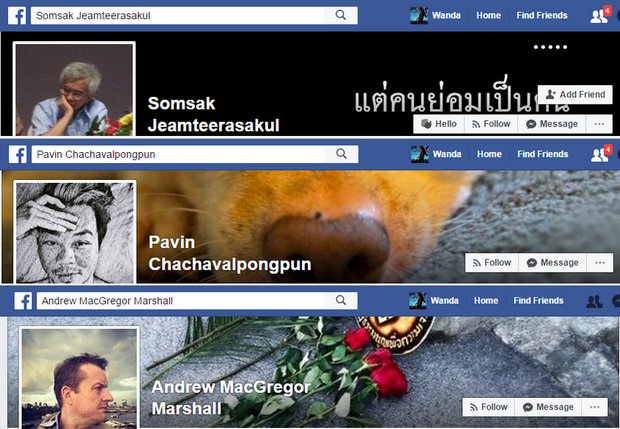 The three Facebook pages at the very top of the government's "do not follow" orders were still available on Tuesday.

Following Facebook's decision, it was found that some of its content, including pages that allegedly contain lese majeste material by fugitive Somsak Jeamteerasakul, have already been removed.

On Tuesday, a video posted by Prof Somsak was made unavailable to users in Thailand:

Takorn Tantasith, secretary-general of the National Broadcasting and Telecommunications Commission (NBTC), said Facebook's response was "a good sign" of things to come.

"The response from Facebook was a good sign of future cooperation between local ISPs and the US internet giant," he said.

As of Tuesday, there was no sign any controversial pages had been removed as requested.

Specifically, the pages of three prominent critics recently blacklisted by the government and put on a "do not follow" list were all available throughout the country - professors Somsak and Pavin Chachavalpongpun, and journalist Andrew MacGregor Marshall.

Mr Takorn said the regulator and local ISPs need to step up their cooperation with Facebook to deal with the proliferation of illicit web pages, especially those involved in pending court cases.

One Facebook user who could be among those affected by this decision said the military junta has been trying to clamp down on many such pages but has not been successful.

On the contrary, the number of followers has increased during this period, he said, adding it is not easy to control the flow of information in the digital era as there are many social media outlets available.

However, Paiboon Amonpinyokeat, an adviser to the National Reforming Steering Assembly committee, said to fight against illegal content, governments must work together on a proposal than simply implementing a raft of draconian measures to control society.

In a related censorship matter, Deputy Prime Minister Wissanu Krea-ngam on Monday invited the Minister of Culture, Vira Rojpojchanarat, and Pichet Durongkaveroj, Minister of Digital Economy and Society, to join the debate over the proposed new law to control the entire Thai media, including the internet. (Post Today photo)

Mr Paiboon said Facebook is normally willing to restrict content that violates US laws, including hate speech and content that breaks criminal codes and the Computer Crime-Related Act.

However, he said Facebook only blocked certain pages and URLs of its web pages, and did not close user accounts in response to such requests.

The state might waive the tax on e-commerce or social media companies if they opt to cooperate with the government in dealing with illicit content on their websites.

Tispa president Morragot Kulatumyotin acknowledged some of the links on Facebook pages that break Section 112 of the Criminal Code, known as the lese majeste law, have already been restricted.

She said local ISPs are willing to comply with Thai laws and provide full cooperation with the government and regulators in blocking illegal content, as well as preventing a negative impact on innocent internet users.

Any ISP that fails to comply with the order will face penalties ranging from a fine to losing their operating licence or facing criminal charges, she said.

The order relates only to content the court has already declared illegal because of its breaching Section 112 of the Criminal Code.