A day after the Khon Kaen court denied him bail again, the activist is pilloried by the ambassador to Korea in an official letter. (FB/Jom Petchpradab)

The Thai ambassador to Seoul has written to a human rights award committee in South Korea asking it to reconsider honouring jailed activist Jatupat Boonpattararaksa this month, who stands accused of breaking lese majeste and other laws.

The man, better known as Pai Dao Din, has been in prison in Khon Kaen on lese majeste and computer crime charges since late December.

But in a copy of the letter acquired by the Bangkok Post, ambassador Sarun Charoensuwan writes: "I have learnt with concern that the May 18 Memorial Foundation has decided to award the Gwangju Prize for Human Rights 2017 to Mr Jatupat Boonpattararaksa.

"I would like to take the opportunity to point out that Mr Boonpattararaksa has committed actions in violation of the laws of the Kingdom of Thailand," continues the letter, which is dated May 2 and addressed to Cha Myung-seok, chair of the foundation. 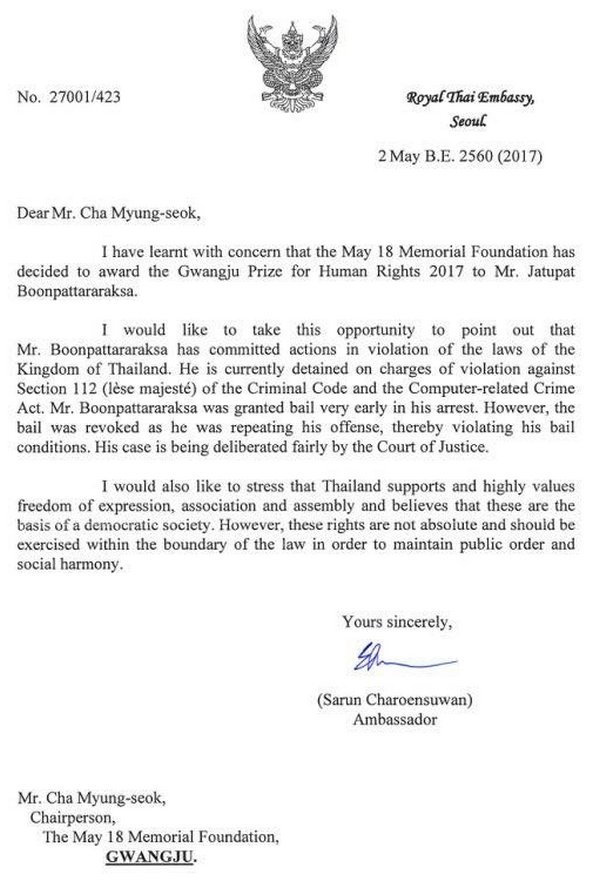 "He is currently detained on charges of violations against Section 112 [lese majeste] of the Criminal Code and the Computer Crime Act," it reads.

"Mr Boonpattararaksa was granted bail very early in his arrest. However, the bail was revoked as he was repeating his offence, thereby violating his bail condition. His case is being deliberated fairly by the Court of Justice.

"I would also like to stress that Thailand supports and highly values freedom of expression, association and assembly and believes these are the basis of a democratic society.

"However, these rights are not absolute and should be exercised within the boundary of the law to maintain public order and social harmony," the letter continues.

The Foreign Affairs Ministry has confirmed the letter exists. The awards committee could not be reached for comment on whether the ambassador's words are likely to have any impact on its decision.

Mr Jatupat's mother Prim Boonpattararaksa said she and her husband Viboon will represent their son and receive the award on his behalf.

The detained man had been hoping to make bail so he could attend the award presentation ceremony in person, but his request was denied.

In refusing Mr Jatupat's bail requests, the Region 4 court and Khon Kaen Provincial Court described him as a flight risk who could tamper with evidence.

On Aug 6 last year, one day before the national referendum on the new charter, Mr Jatupat was arrested in Chaiyaphum for allegedly violating the Public Referendum Act by handing out leaflets from the anti-coup New Democracy Movement.

The act prohibits the distribution of false, rude, inciting or intimidating publications or messages concerning the draft constitution.

The Phukhieo Provincial Court released him on bail on Aug 23.

He was arrested again on Dec 3 for using his Facebook account to share a BBC story that is now blocked in Thailand, but was released on bail the following day.

Another arrest came on Dec 22 for allegedly challenging the state with a new Facebook post, and the student activist from Khon Kaen University was indicted on Feb 10 for alleged lese majeste and violation of the Computer Crime Act.

Ms Prim said her son has not been convicted by a court for any of the three cases he faces, meaning he should not be seen as having repeated the offence.

National Human Rights commissioner Angkhana Neelapaijit, who won the Gwangju Award for Human Rights in 2006, described it as a prestigious accolade.

The people of Gwangju rallied for democracy with bloody battles in 1980 when under martial law.