Scene of destruction: Police examine the scene on on the first floor of Phramongkutklao Hospital in Ratchathewi district, where 25 people were wounded, one critically, by the bomb. (More photos below; courtesy Royal Thai Police)

Monday's blast at Phramongkutklao Hospital was heavily denounced while authorities said they believe it was linked to two previous explosions in Bangkok over the past two months. It comes as the government marked its third anniversary in power after the May 22, 2014, coup.

Political motivations and an operation of southern militants are among the leads authorities are investigating.

The explosion took place in the dispensary's waiting room, known as the Wongsuwon room, for commissioned officers at 10am. A total of 25 people were hurt, including one critically.

Speaking after a meeting of security officials Monday, army commander-in-chief Chalermchai Sitthisat said the attack was aimed at claiming lives as nails were attached to the explosive device. 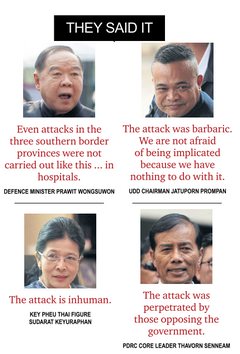 "It's very bad. Even in a war, hospitals are exempt from attacks. This time, most victims were elderly and patients," he said.

The blast in front of the National Theatre near Sanam Luang on May 15 injured two women and an explosion outside the old Government Lottery Office on Ratchadamnoen Klang Avenue on April 5 wounded two other women.

Gen Chalermchai said the two incidents were linked to the hospital bombing since the same materials were used to make the bombs. The group of attackers has not yet been identified, but the attack was aimed at causing trouble for the government. Armed forces have been ordered to step up security measures in crowded areas.

National police chief Chakthip Chaijinda echoed Gen Chalermchai. He said the "bomb signatures" were similar in all three blasts, including the soldering.

"The bomb used was a pipe bomb put inside a PVC tube that they placed inside a flower jar," he said.

Police have not yet found anyone hiding the bomb in the pot, as CCTV footage was still being reviewed, Pol Gen Chakthip said.

Asked whether the attack was linked to the three year anniversary of the coup, the police chief said he had no information about this, but the attackers bear ill will towards the country.

"The premier has ordered state agencies to provide the best care for the injured and find out who was behind the incident," said Lt Gen Sansern said.

Gen Prawit expressed confidence police will apprehend the bombers quickly. "The government will make everything better. The perpetrators were bad to do something like this. Even attacks in the three southern border provinces were not carried out like this ... in hospitals." 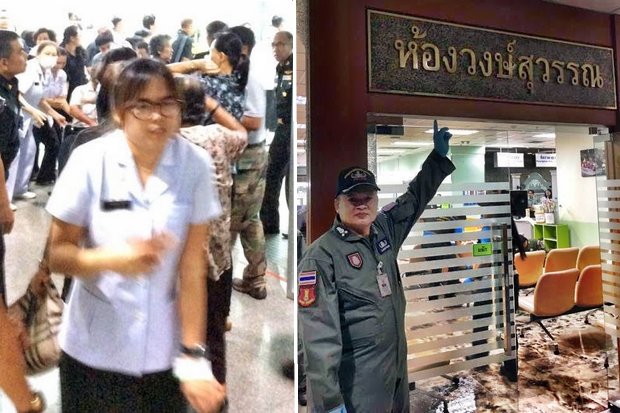 A witness, Sapaspimol Singsuwan, said she heard a blast, followed by screams. She said she saw scores of people injured and smoke filling the air.

Explosive ordnance disposal (EOD) technicians have not yet concluded what kind of bomb materials were used to make the bomb but it was designed to cause damage in a 2-3 metre radius of the blast, Pol Gen Srivara said. A security source said the bomb was a low-pressure type with metal scraps and nails.

Of the 25 injured, 13 had been discharged, said Lt Gen Saroj Keokajee, commander of the Army Medical Department. An elderly woman was badly hurt with wounds to her cheek and she would need an operation, he said. Of the wounded, 13 were both service and retired military officers, 11 were civilians and one was a police officer.

A hospital source said the explosion took place in the room for VIPs on the first floor. The room serves as a one-stop service spot for commissioned officers and their families.

It is close to a medicine dispensing room where ordinary patients can wait to receive medicine. Ordinary people can possibly enter the VIP room, the source said.

Meanwhile, the United Front for Democracy against Dictatorship (UDD) has denied any involvement in the bombing. "The attack was barbaric. We are not afraid of being implicated because we have nothing to do with it," UDD chairman Jatuporn Prompan said.

The blast has done no good to anyone and is detrimental to the country, he said, urging authorities to bring the perpetrators to justice. Thais should denounce the attackers since hospitals must not come under attack, he said.

"The attack was perpetrated by those opposing the government," said Mr Thavorn, adding they aimed to discredit the regime.

Khunying Sudarat Keyuraphan, a key figure of the Pheu Thai party, said: "The attack is inhuman and the perpetrators had ill intentions anyway and wanted to leave it as a message."

"I want to condemn the use of medical facilities as a place to stage an attack," Ms Angkana said. "The assault at the hospital breaches international humanitarian law.

Meanwhile, the bomb attack caused no panic among investors on the stock market. The Stock Exchange of Thailand main index climbed 0.52%, or 8.09 point, to 1,557.73. Not now, stay back! Army officers responded first to reports of an explosion at the hospital and cordoned off the affected area. (Reuters photo) 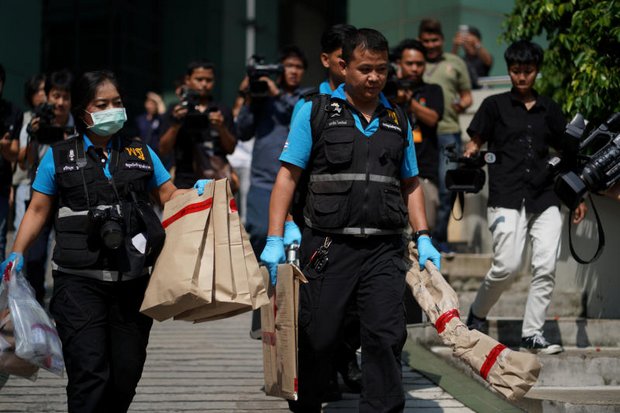