Strict security checks were carried out by soldier at every entrance to the army-run Phramongkutklao Hospital on Tuesday, following Monday's bombing of a waiting room of mostly elderly patients. (Photo by Chanat Katanyu)

Next year's general election could be delayed if law and order continues to be disrupted by bomb attacks and other threats to peace, Prime Minister Prayut Chan-o-cha said Tuesday.

He made the remarks following a blast at Phramongkutklao Hospital on Monday apparently targeting commissioned and retired officers, that left 25 people injured.

The timing of the election could change unless peace is preserved, Gen Prayut said.

"Most importantly, as long as the situation continues this way -- bombings, use of war weapons, conflicts among people and other such problems -- can the election still take place? It depends on everyone's cooperation,'' he said.

Gen Prayut condemned the bombing of the army-run hospital as a gross violation of human rights.

The prime minister claimed there were rumours on social media that his government was behind the blasts in order to hold onto power.

"No government conducts a crazy act like that, except those who want to be the government," he said. 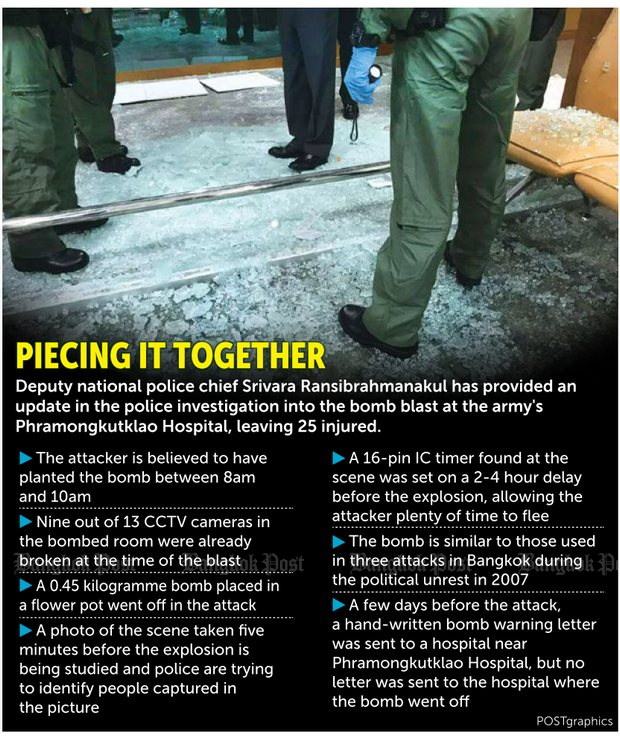 There was a noticeable tightening of security around Bangkok on Tuesday, but particularly at Phramongkutklao Hospital, where soldiers checked everyone entering the facility, including checks on all belongings and bags.

The explosion took place in the dispensary's waiting room, known as the Wongsuwon room, for commissioned officers at 10am. Thai media earlier reported that 25 people were hurt, one critically. As of Tuesday, seven remained in hospital.

Deputy national police chief Srivara Ransibrahmanakul said investigators had confirmed that the explosive device stashed in a polyvinyl chloride (PVC) pipe had been placed inside a flower pot.

They also found the device had an integrated circuit timer set for two to four hours, Pol Gen Srivara said, adding that investigators had been told to look for any suspicious people who appeared at the hospital in the hours leading up the blast.

Pol Gen Srivara said police received a bomb alert in the form of a handwritten letter three days earlier warning them that attack was imminent. The letter was sent to the director of the National Cancer Institute on Rama VI Road about 1km from Phramongkutklao Hospital, a source said.

It warned that three state-run hospitals in the area would be targeted for "terrorist attacks" from the Barisan Revolusi Nasional (BRN) rebel group in the deep South and the Islamic State (IS) terror group, the source said.

A member of IS reportedly escaped from Malaysia and arrived in Thailand last week.

"Keep an eye out for a Muslim woman wearing a hijab and carrying a bag," the letter reads. The letter was signed by "a villain who has turned over a new leaf".

Weerawut Imsamran, the institute's director, confirmed he had received a warning letter last Thursday and brought the matter to the attention of Phaya Thai police on Friday.

The letter was handwritten and the sender gave a Muslim name and an address in Bangkok, he said.

"I did not think it would really happen," he said, adding that his institute has since beefed up security, including checking closed-circuit cameras and increasing surveillance.

Police are investigating whether the letter might be linked to the hospital bombing or whether it was a hoax or just a coincidence, Pol Gen Srivara said.

Pol Lt Gen Sanit Mahathavorn, chief of the Metropolitan Police Bureau, said investigators have obtained footage from a mobile phone recorded five minutes before the hospital blast. The footage was an important piece of evidence, he said.

A source with the investigation team said that nine of 13 CCTV cameras at the blast scene were not working at the time of the explosion.

Pol Col Kamthorn Ouicharoen, chief of the city police explosive ordnance disposal (EOD) unit, said the components used to make the hospital bomb were the same as those used in two previous bombings.

He was referring to the blast in front of the National Theatre near Sanam Luang on May 15 and an explosion outside the old Government Lottery Office on Ratchadamnoen Klang Avenue on April 5.

On Tuesday, police arrested a man in connection with the letter warning of a series of blasts targeting hospitals, they said. The man's identity has not been disclosed.

Also Tuesday, Pheu Thai acting deputy secretary-general Chavalit Wichayasut said Gen Prayut must not use the bombings as an excuse to break his promise to follow the election roadmap.

The government has been in office for more than three years and should stick to its roadmap, he said.

Pramual Aimpia, a Democrat Party deputy spokesman, also urged the government not to change course or use the incident to delay the poll.

Akanat Promphan, spokesman of the Muan Maha Prachachon for Reforms Foundation, a reincarnation of the People's Democratic Reform Committee, said the foundation agreed that an election should be held only when the country is at peace.

"What use is it to have an election amid civil war or insurgencies? How can that be called democracy?" he said.

He said the public should not panic but rather condemn the attacks and support the government as it investigates cases and finds ways to prevent further incidents.

Meanwhile, the Police General Hospital said it had checked on the condition of its 300 closed-circuit television cameras as part of beefed-up security.