He vowed that authorities would redouble their efforts to seek the fugitive's extradition. 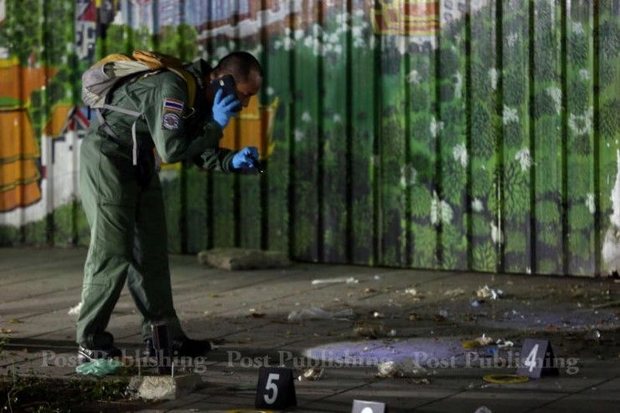 An army EOD team combed the Wongsuwon waiting room of the Phramongkutklao Hospital for clues of Monday's bombing, but have come up almost empty again on possible perpetrators. (Photo Royal Thai Police)

Gen Chalermchai spoke cryptically at first, saying the new leads suggest the blast was masterminded by a fugitive who was continuing to rally his supporters to violence despite having fled to a neighbouring country.

When pressed on the point by one reporter he identified Mr Wuthipong's network as the group in question.

He said the group constantly uses social media to instigate violence, adding that investigators are still looking into whether there is any connection between the latest hospital bomb and the recent arrest of hardliners. 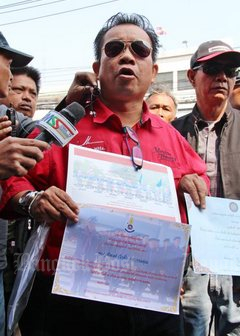 Mr Wuthipong, who reportedly fled to Laos after a warrant was issued for his arrest in April 2014 on a lese majeste charge, has also been implicated in another case that saw a cache of weapons confiscated in Pathum Thani this March.

Following the discovery of the firearms, the government sent a request to Laos for his arrest but has reportedly not received a reply.

Other red-shirt leaders disputed his involvement. Tida Tawornseth, who heads up the United Front for Democracy against Dictatorship (UDD), said she was not convinced Kotee's network had the resources to carry out the bombing.

"Kotee was not a hardliner," she said. "It's easy for certain forces to cast his network in a bad light."

Gen Chalermchai also did not rule out the involvement of rogue military officers in the bombing.

Yet his remarks about Kotee reinforce comments by national police chief Chakthip Chaijinda that political hardliners or extremists may be responsible.

Gen Chalermchai, who also serves as secretary-general of the National Council for Peace and Order (NCPO), said the military would not intervene in the investigation but was ready to assist if asked to.

He said figures in the government have floated the idea of using military courts for cases involving public security. The regime issued an order to this effect after the May 2014 coup but it was later revoked.

When asked about the nine suspects arrested in connection with a spate of arson attacks in Khon Kaen, the army chief said there is nothing linking them to the hospital blast in Bangkok.

They claim they were paid several hundred baht to start the fires and have already been handed over to the police, he added.

There have been several bomb attacks in Bangkok since the Erawan shrine was targeted in August 2015.

The latest rash of incidents, which have all occurred close to the third anniversary of the coup, includes an explosion in front of the National Theatre near Sanam Luang and a blast outside the old Government Lottery Office on Ratchadamnoen Klang Avenue. To speed up the probe into the three most recent blasts, Pol Gen Chakthip has appointed an investigative team headed by deputy national police chief Srivara Ransibrahmanakul, Gen Chalermchai said.

In his order signed on Wednesday, the police chief said all three attacks are believed to be the work of the same group.

It was reported that 200 police officers have been assigned to investigate the explosions and bring the culprits to justice.

Meanwhile, a source close to the investigation said a composite sketch of a possible suspect in the hospital bombing has been drawn up, but police have decided not to release it or use it to seek a court warrant until more evidence is found.

The source said police have found two persons of interest who visited the hospital -- ostensibly to visit patients there -- and that both are close aides to a former army colonel who was charged with illegal possession of firearms.

About 20 people are now wanted for questioning, the source said, adding they were captured by security cameras entering and leaving the hospital before and after the explosion.

The footage has been collected from 17 security cameras, the source said. But nothing of use has emerged from the camera inside the dispensary's waiting room, known as the Wongsuwon room, where the bomb went off and left 25 people injured, the source added.

The source said the camera may have missed the perpetrator as it was placed to capture images from the drug dispensary and cashier section.

A man detained on May 24 has been released without charge, the source said.