Another pipe bomb was found Tuesday afternoon near Ratchadaphisek Road and the Thailand Cultural Centre MRT Station, sparking public concerns that another bomb attack could be imminent, despite security assurances by the authorities.

The discovery came about a week after a bomb attack at Phramongkutklao Hospital on May 22, which coincided with the third anniversary of the coup. 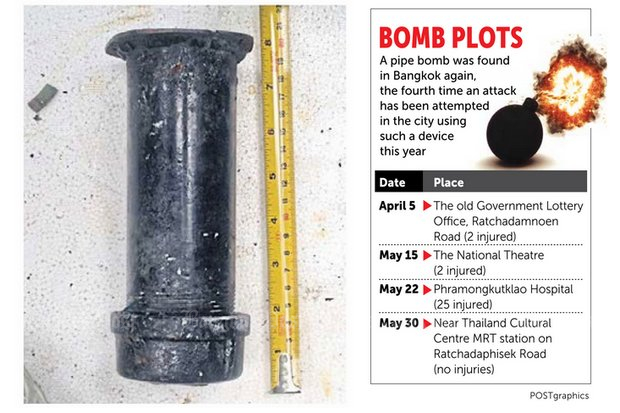 National police chief Chakthip Chaijinda said no connection has been found between the discovered bomb and the hospital blast at this stage of the investigation, but initial findings show the bomb, which was assembled in an 20-centimetre long metal pipe, resembled the device used in the Ratchaprasong area several years ago.

He did not specify which incident in Ratchaprasong he was referring to.

Pol Gen Chakthip said the device was being examined to determine whether it was old or new and intended to be set off in a fresh attack.

The national police chief said the recent series of explosions in Bangkok could have been politically motivated or designed to discredit the police.

Prior to the hospital blast, which injured 25 people including retired officials, one bomb went off in front of the National Theatre near Sanam Luang on Rattanakosin island on May 15 and another blast took place outside the old Government Lottery Office on Ratchadamnoen Klang Avenue on April 5.

As police were scrambling to piece together evidence in the hospital bomb attack and seek arrest warrants, Huai Khwang police were alerted at about 2pm to a suspicious-looking device not far from the Thailand Cultural Centre subway station.

A motorcycle taxi called in to report the device. He spotted it as he was on his way to fish in a quiet area behind a restaurant on the inbound side of Ratchadaphisek Road in Huai Khwang district.

The device was said to be a steel pipe about 20cm long with a fuse. The pipe was in a green plastic basket inside a black plastic bag. The fuse was attached to a mosquito coil that had been ignited before being dampened and made ineffective by the rain.

Police sealed the area off as explosive ordnance disposal (EOD) unit went in to examine the object.

According to a City Hall road cleaner, two men arrived on a motorcycle near the location where the device was found, with the pillion rider getting off the bike and spending about five minutes there.

He then got back on the bike and the pair sped off. 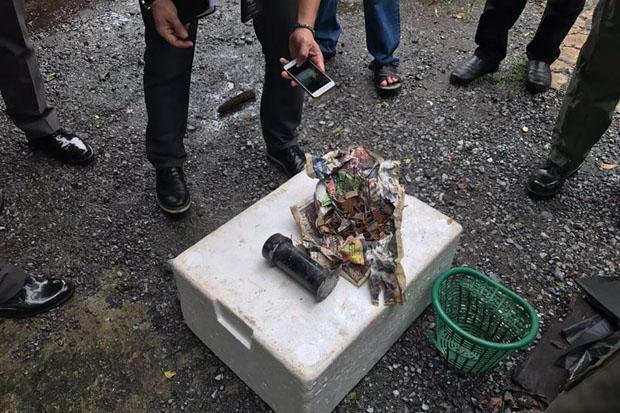 Bomb disposal squad members took photos of the explosive, then removed it for forensic examination. (Photo via FB/Klong Prem)

Pol Lt Gen Adul Narongsak, deputy commissioner of the Metropolitan Police Bureau, said the object was a pipe bomb ready to be detonated.

Inbound lanes were closed and cleared of traffic, but it was later found to be an empty box.

Police at Tha Kham police station said they have received several calls about suspicious packages in the wake of the recent explosions.

Meanwhile on Tuesday, Deputy Prime Minister Prawit Wongsuwon rejected criticism that there was a lack of cohesion in the police investigation into the hospital blast after two senior officers gave different information about potential suspects.

He said the differences had nothing to do with a lack of cohesion, saying more details would be needed for clarity.

Pol Gen Chakthip dismissed as untrue media reports about a possible conflict between him and his deputy, saying it was a misunderstanding.