Ex-premier Yingluck Shinawatra says she's not going anywhere and is even prepared for conviction and prison as her Supreme Court case winds up. (Photo by Wichan Charoenkiatpakul)

Former prime minister Yingluck Shinawatra has affirmed that she will not flee justice and is ready to face a possible conviction that could lead to her imprisonment.

Ms Yingluck has been charged with dereliction of duty for failing to stop corruption and irregularities stemming from her government's rice-pledging scheme. The final hearing for defence witnesses is scheduled for July 21.

After that, the Supreme Court's Criminal Division for Holders of Political Positions will specify dates for both the plaintiff and defendant to deliver their closing statements, which normally occur from one week to no later than one month after testimony in cases concludes.

The court is expected to hand down a ruling by September. If found guilty, Ms Yingluck could face a jail term of up to 10 years.

Unlike her brother, ousted prime minister Thaksin, Ms Yingluck is vowing to fight the case until the last moment.

"Wait and see," she told the Bangkok Post. "I'll be there in court to the end. We'll meet there [on the date of the ruling]." 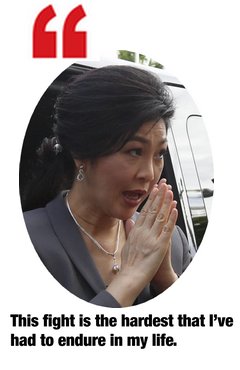 On that day, Ms Yingluck could be put behind bars immediately if the court hands down a prison sentence.

Some critics, particularly her political opponents, believe Ms Yingluck will follow in the footsteps of Thaksin, who took flight before the court handed him a two-year jail sentence in the Ratchadaphisek land case in 2008. He has lived in self-exile ever since.

Ms Yingluck rejected such a possibility, saying she is ready for her judgement day.

"I'm ready to face fate," she said with a grim face.

Some political observers say that if Ms Yingluck stayed put in Thailand and was imprisoned, esteem for her as a political heroine would rise, paving the way for her eventual return to politics.

But some analysts went further, saying if she were found guilty, she and the Shinawatra family's opponents would remain firm and her jail sentence would become a cause for political attacks.

Ms Yingluck said she has confidence the defence witnesses who testified in court have proved her innocent of the charge.

"Even with a 1% chance of winning, I'll keep on fighting to the best of my ability to prove I'm innocent," she said. "We believe that a 1% chance can grow. We'll keep going at it as best we can."

In the latest chapter of her legal fight, Ms Yingluck and her legal team petitioned the Supreme Court last week to seek a ruling from the Constitutional Court in the legal proceedings concerning her case.

She requested that the Constitutional Court rule on whether the proceedings of her case based on the 1999 law on the Supreme Court's Criminal Division for Holders of Political Positions contradict Section 235 of the 2017 charter.

Section 235 of the current charter requires the court to mainly rely on the National Anti-Corruption Commission (NACC) report on the case for consideration.

The clause also stipulates that for the benefit of justice, the court has the authority to inquire additionally into witnesses and the evidence.

According to Ms Yingluck's legal team, prosecutors previously added additional witness documents that were never included in the NACC report before.

The judges of the Supreme Court's Criminal Division for Holders of Political Positions have reportedly accepted Ms Yingluck's petition for consideration and will rule on July 21 whether to seek a ruling from the charter court as requested.

"This fight is the hardest that I've had to endure in my life," the former prime minister said.

"But whatever the outcome, I take pride in the role that I played in giving farmers the better life which they deserve."

Besides the criminal case, Ms Yingluck is also fighting the government's move to examine her assets for seizure through an administrative order.

She was ordered by a government committee to pay 35 billion baht in alleged damages wrought by her rice-pledging scheme.

She said the examination of assets should properly proceed after a related criminal case is concluded. Such a ruling would determine whether grounds exist for pursuing a civil case.

But the government decided to issue an administrative order to seize her assets despite the still-pending criminal case against her.

"We consider the steps they are taking unjust," Ms Yingluck said.

"If you ask how I am doing, the answer is I'm hanging in there as best I can," she said, adding that her son and moral support from her supporters and friends have given her strength.

Asked whether she would still accept the top government post if she could turn back the hands of time, Ms Yingluck said she would not look back and blame anyone but instead look forward to a better future for herself and her family.