No new appointments yet as end of term looms

Prime Minister Prayut Chan-o-cha must invoke the powerful Section 44 to avert a regulatory problem when the term of the National Broadcasting and Telecommunications Commission (NBTC) board expires in October, an industry executive has urged.

The regulator will be a lame duck at the end of its six-year term as all the existing commissioners will not have full authority, said the executive who requested anonymity. Subsequently, the NBTC would be unable to make decisions on important issues, including the planned auction of 2600-megahertz spectrum.

The current eight NBTC commissioners are working under a six-year term which ends on Oct 6 this year. 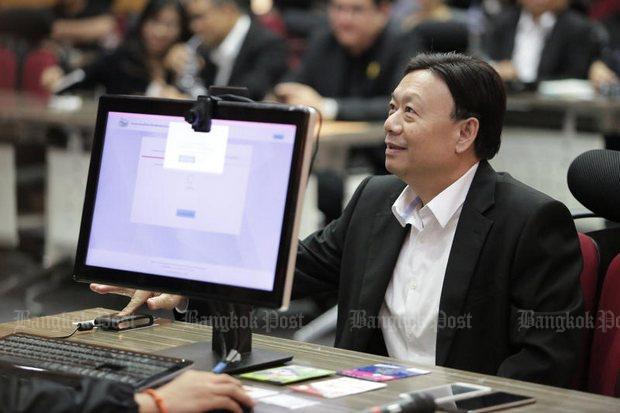 National Broadcasting and Telecommunications Commission secretary-general Takorn Tantasith demonstrates how smartphone owners can enrol their fingerprint and facial scans. His term and all commissioners' terms run out in 10 weeks. (Bangkok Post file photo by Walailak Keeratipipatpong)

The new NBTC law, put into effect on June 23, states that the government must recruit new commissioners to replace the existing ones. After its expiry, the NBTC board will be just an acting one until a new board is officially appointed, said the source.

But the government has yet to make any move to appoint new commissioners, a process that will take at least four to five months.

There is no alternative but for Gen Prayut to invoke Section 44 to keep the current board until a new one is installed, said the source.

"The prime minister has to in order to avert a regulator authority vacuum," the source said.

According to the new NBTC Law, Sections 14 and 16 state that the National Legislative Assembly (Senate) will have to form a selection committee that will be responsible for drafting criteria for new commission member selection.

The committee will comprise seven people, each from important agencies, namely a judge of the Constitutional Court, Supreme Court, Supreme Administrative Court, and a representative from the National Anti-Corruption Commission, Office of the Auditor-General, Office of the Ombudsman and the Bank of Thailand.

Once the drafting of criteria for NBTC qualification and the selection process is done, the committee will invite candidates to apply.

Recruitment under the new NBTC law will see the selection of 14 potential candidates, whose names will be put to the National Legislative Assembly for a vote. Seven will be selected to form the new NBTC.

The new commissioners will be responsible for governing both telecom and broadcasting businesses, overseeing spectrum auctions and managing satellite spectra.

NBTC secretary-general Takorn Tantasith said the NBTC office is in the process of transforming its organisational and management structure to fit the new one, which will complete in September, in accordance with the new NBTC law.

The current system has 11 commissioners divided into two committees -- telecom and broadcasting -- each had five commissioners with the NBTC chairman sitting on both committees.

Under the new structure, the present 42 management divisions and directors will be downsized to 30.