The armed forces began all-out efforts on the weekend to get relief and aid to flood-stricken areas. Above, army officers provide aid packets to stranded Sakon Nakhon residents. (Photo Twitter/@wassanananuam)

Prime Minister Prayut Chan-o-cha warned politicians Sunday not to exploit the flood situation for political gain, insisting the government has done its best to handle situations in several provinces.

The reaction came after Pheu Thai politicians criticised the government for failing to warn residents of imminent major flooding in the Northeast, particularly the hardest hit province, Sakon Nakhon.

Government spokesman Sansern Kaewkamnerd said the prime minister wanted people to know the Meteorological Department and the Disaster Prevention and Mitigation Department issued warnings about weather conditions and sent officials and volunteers to keep the public informed since the day the rain started -- in line with the "safety Thailand" policy.

Police, military and civilian officials have made great efforts to help people hit by the disaster and received good cooperation from the private sector, he said.

"But the prime minister does not want politicians to exploit the situation for political gain by making false accusations against the government and creating rumours to cause the public to panic," Lt Gen Sansern said.

"Look back to the 2011 floods -- we can see that the situation at the time was caused by mismanagement [of the then government]. Despite knowing how large the volume of rainwater was, the then-government did not rush to drain the water, causing considerable damage to the country," said Lt Gen Sansern, referring to the Yingluck Shinawatra administration.

Among critics of Gen Prayut's flood management is Plodprasop Suraswadi, former deputy prime minister in the Yingluck administration and founder of the National Disaster Warning Centre.

On his Facebook page on Saturday he blamed the government of lacking an effective disaster warning system, resulting in the worst flooding in Sakon Nakhon in two decades.

Mr Plodprasop said the government should have been aware the province would have faced floods. He also urged the government to launch a probe into why no agency issued flood warnings, as opposed to mere warnings on the weather, which did not go far enough.

He said unusually high levels of rainwater -- up to 423mm -- were recorded in the province over the past week in Sakon Nakhon and the government should have been aware of the massive flow of water from Phu Phan Mountain to the city and should have issued a warning.

He also urged the government to launch a probe into why no agency warned residents to brace for heavy floods.

Lt Gen Sansern said all provinces have been instructed to examine the damage inflicted to houses and ascertain the number of people killed or injured so assistance could be provided.

National Council for Peace and Order (NCPO) spokesman Winthai Suvaree said Sunday that the NCPO believed people understood the fact that natural watercourses in the Northeast were unable to hold the large volume of water, resulting in the major flooding.

"That information [Mr Plodprasop's accusation] is only a personal opinion with a political bias and public tribulation was exploited," he said.

Col Winthai said the government tackled flood situations based on two principles: warnings and preparation, as well as mitigation of damages.

He said the government has continued to warn residents in flood-prone provinces about heavy rains which led to flooding as well as inform officials to be on standby. 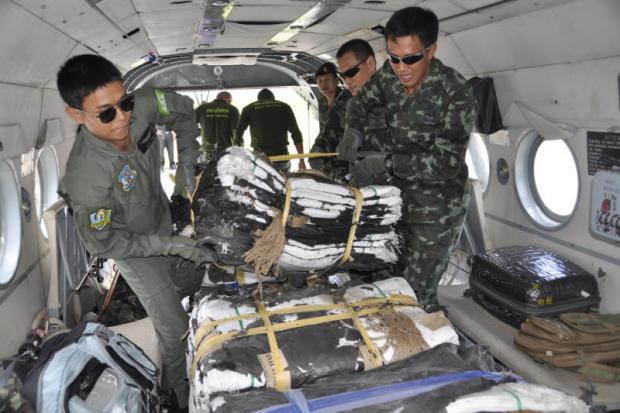 A total of 24,000 empty sandbags and medical supplies are being loaded onto an Mi-17 helicopter in the Suranaree military camp in Nakhon Ratchasima. They will be distributed to flood-affected victims in Sakon Nakhon, the northeastern province plagued by its worst flooding in two decades. (Photo by Prasit Tangprasert)

In Sakon Nakhon the situation is still in crisis.

About 50 communities surrounding Nong Han, the country's second largest freshwater lake which has received massive water from Phu Phan Mountain, are severely affected. The level of water was reported to be increasing 1cm per hour as of Sunday.

More than 360 people from about 90 households in Don Khok Yang village were isolated by inundation. Authorities would have to travel by boats for 3km to help them.

However, the water level in the city has receded in some areas.

As flooding receded in Sakon Nakhon municipality, officials have turned their attention to Lom Sak and Muang districts of Phetchabun.

Several roads in the Lom Sak municipality have been flooded by up to 80cm of water since Saturday night after floods hit neighbouring Lom Kao district.

As the high water levels of the swollen Pa Sak river move downstream from Lom Sak, authorities are concerned that Muang district could be flooded next.

Phetchabun governor Pibu Hattakitkosol said about 6,500 people were affected by the floods in Lom Sak -- the district linking the northern and northeastern regions -- with many of their houses inundated.

Public and private sectors nationwide were ordered to raise donations in compliance with state regulations and laws.

Agencies must issue receipts to donors and disclose the donation amount to the public.