Committee identifies 190 issues in its less than two-year tenure

As the National Reform Steering Assembly was dissolved Monday, Prime Minister Prayut Chan-o-cha pledged to use its work to lay down a strategic framework for national development.

Gen Prayut made the promise while accepting a final reform report from the NRSA, which pushed forward 190 issues for national reform over its tenure which lasted one year and 10 months.

The NRSA held its last meeting on July 25. The committee was established in 2015 to continue the work of the now defunct National Reform Council (NRC), which was dissolved following its vote to reject the Borwornsak charter draft. 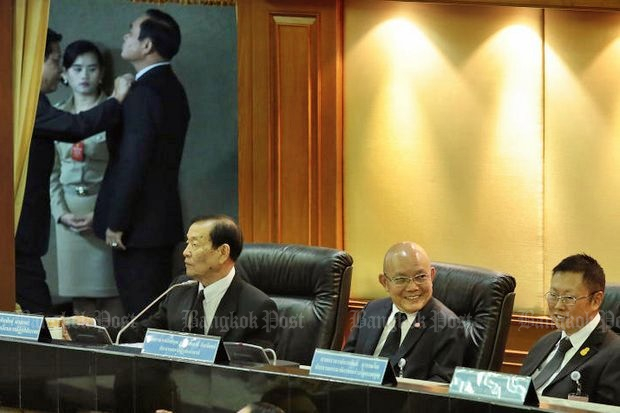 Prime Minister Prayut Chan-o-cha is prepped by aides to bring down the curtain on the final meeting of the National Reform Steering Assembly, which presented him with its report on national reforms. (Photos by Chanat Katanyu)

On receiving the reform report, Gen Prayut said it marked the success and cooperation of all stakeholders in planning the future of the country.

"National reform is the government's top priority and the government will use the NRSA's work to lay down the framework for national strategy," he said.

Gen Prayut stressed the 20-year strategic plan must be carried out along with national reform, insisting the regime does not intend to control future governments.

"The plan is not designed to control governments. These are tools for driving the country forward," he said.

Gen Prayut said the government's critics were against the long-term strategic plan because they saw it as a restriction.

"The government is not thinking about prolonging power. It is focusing on how to achieve sustainable development through reforms," he said.

NRSA members have expressed confidence the committee has achieved good things even though it will be some time before certain benefits materalise.

Gen Lertrat Ratanavanich, an NRSA whip, said several of the NRSA's proposals have been put to practice. They include producing legislation to be vetted or endorsed by the National Legislative Assembly and the establishment of the Criminal Court's Division of Corruption and Malfeasance in line with the anti-corruption law.

Known as the anti-corruption court, the court was launched in October last year and took over 70 cases related to alleged dishonesty by officials.

The laws governing national strategy and reform and the constitution's chapter on national reform were also initiated by the NRSA, and have been royally endorsed and published in the Royal Gazette. He said two other things expected to materialise soon are the bill on conflict of interest and the bill on recovery of ill-gotten assets.

"Once these two bills are enforced, they will mark major reform in preventing and suppressing corruption," he said.

Of the 190 issues for reform, he said 42 of them cover 36 draft bills and must be implemented within a year.

The Committee for National Administration under the Framework of National Reform, Strategy and Reconciliation, chaired by the prime minister, has agreed to push ahead with at least two bills.

One is related to public information, and aims to allow the public and media access to information that would allow them to scrutinise the government and its handling of policy. The other bill concerns public participation in the implementation of public policy.

Another NRSA member Seree Suwanpanont said the NRSA should be given credit for several elements found in the organic bills, including political party members' participation in selecting election candidates.

However, many critics do not have the same praise for the NRSA.

They recently accused the NRSA of paving the way for the civil service to spearhead the country's development in the future. 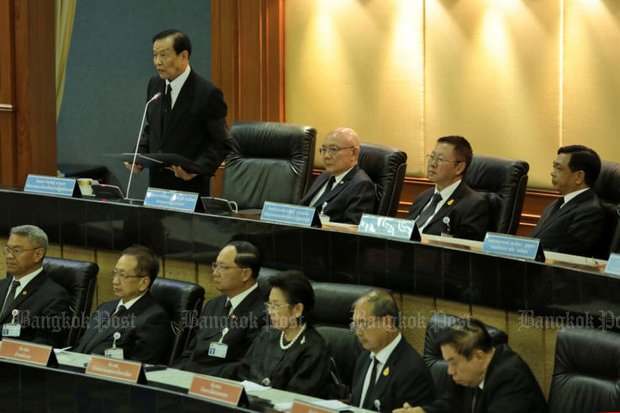 One of the critics is former NRSA member Nikorn Chamnong, an adviser to the Chartthaipattana Party's leader, who resigned from the assembly to maintain his eligibility to contest a national poll.

Mr Nikorn said the NRSA is largely made up of civil officials and the proposals are not diverse enough and come mostly from them. Moreover, only a few issues concern drastic change, and this suggests civil servants do not dare to change much.

Mr Nikorn said he believes the NRSA is the regime's tool to test the water on several issues proposed to the public.

Some issues, such as elections of village headmen and kamnans and media reform, drew flak and were finally ditched by the government.

Critics also expressed concern over the bills on national strategy and procedures for reform and the setting up of committees to oversee these tasks as stipulated.

Deputy Democrat leader Nipit Intarasombat and a former deputy secretary-general of the Pheu Thai Party Chavalit Wichayasuthi believe if the committees require the NRSA's proposals to be implemented, future governments will have their hands tied.

On the other hand, if there are no obligations, the NRSA's work may eventually be discarded.