Chayan Vaddhanaphuti, an organiser of the 13th International Conference on Thai Studies at Chiang Mai University, is fingerprinted after reporting to police at Chang Phuak police station on Monday. (Photo from @lawyercenter2014 Facebook account)

An organiser of an international conference on Thai studies in Chiang Mai and four other attendants reported to police on Monday and denied charges on defying a junta order.

Chayan Vaddhanaphuti, director of the Regional Centre for Social Science and Sustainable Development at Chiang Mai University, met Chang Phuak police with Pakawadee Veerapatpong, Chaipong Samnieng, Nontawat Machai and Thiramon Bua-ngam after the summons had been issued for them on Aug 11, almost a month after the four-day 13th International Conference on Thai Studies at Chiang Mai University ended on July 18.

They face charges of assembling of more than four for political activities, which is prohibited by the National Council for Peace and Order.

Mr Chayan was a key figure organising the convention and the four others attended it. 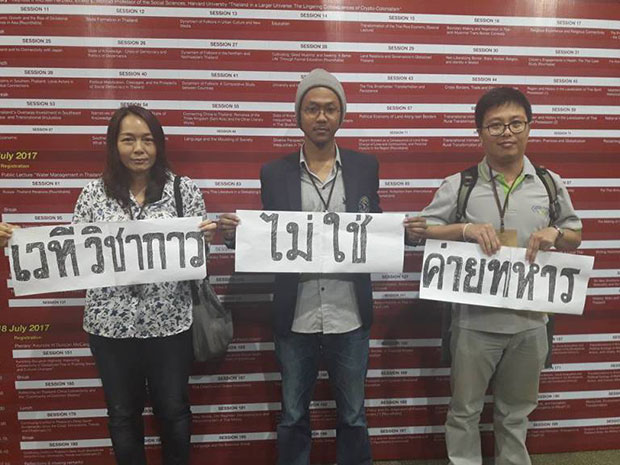 Participants in the International Conference on Thai Studies at Chiang Mai University show a banner reading "An academic forum, not a military camp" on the last day of the event on July 18. (Photo from @ThaiAcademicNetworkforCivilRights Facebook account)

The army decided to lodge the complaint on grounds that the four showed a banner reading "an academic forum, not a military camp" and took pictures with it on July 18, according to the Thai Lawyers for Human Rights.

Mr Chayan has said earlier that the banner was not part of the scheduled programme of the event and he only watched it.

The conference gathered more than 1,000 people.

"Despite the lingering fear in the air and undercover police officers mingling in the crowds, the academics managed to present their ideas to the public," the organisers said on the Facebook account.

Thai and foreign academics and activists have strongly opposed the summons for the five and urged the junta to end the move.

Many showed support for the five persons at the police station on Monday.