Phayao Akkahad, left, the mother of volunteer nurse Kamonked killed during the crackdown on red-shirt protesters, joins relatives of other victims at Ratchaprasong intersection.

Hours after the Supreme Court dismissed the case against former prime minister Abhisit Vejjajiva and his deputy Suthep Thaugsuban for the deadly crackdown on red-shirt protesters in 2010, the anti-graft agency said it would file a new case if fresh facts emerge.

The Supreme Court upheld a lower criminal court ruling to dismiss the case yesterday saying it was beyond the court's jurisdiction.

It said the National Anti-Corruption Commission (NACC) would have to file a new case with the Supreme Court's Criminal Division for Holders of Political Positions instead of the Criminal Court.

In explaining yesterday's ruling, the court reasoned that both defendants ordered the crackdown in the line of duty.

NACC president Watcharapol Prasarnrajkit said the agency was now re-examining evidence and witnesses to see if the case could be revived.

Nattawut Saikuar, a core member of the red-shirt United Front for Democracy against Dictatorship (UDD), petitioned the NACC on Aug 11 to re-investigate the case stemming from the crackdown that occurred between April 10 and May 19, 2010. At least 91 people died in the capital during the operation.

Earlier, the Department of Special Investigation (DSI) accused the former prime minister and his deputy, as well as Gen Anupong Paojinda who served as army chief during the crackdown, of malfeasance for the deadly dispersal.

But a previous incarnation of the NACC dropped the case in 2015. It said soldiers had performed their duty at a time when an emergency decree was in force. The situation was confusing because armed elements were among the protesters, it added.

The Centre for the Resolution of the Emergency Situation (CRES) was therefore required to launch measures to reclaim areas from the protesters to restore order, it said.

Armed officers were allowed to use their weapons to protect themselves. However, they were ordered to conform to international practices, be prudent and only use firearms when necessary, according to the anti-graft agency.

The UDD accused the NACC of "double standards" given its more aggressive handling of a similar case against former prime minister Somchai Wongsawat and three alleged accomplices for the 2008 crackdown on yellow-shirt protesters which left two dead.

The agency took its suit to the Supreme Court's Criminal Division for Holders of Political Positions but the case was recently thrown out.

"The Somchai government only used tear gas to disperse protesters and public prosecutors had dropped the case but the NACC still filed the case," Mr Nattawut said yesterday. 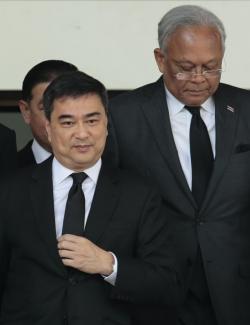 "Meanwhile, operations carried out under the Abhisit administration used M16 rifles but the NACC did not even forward that case to prosecutors."

He said if the NACC refuses to revive the case against Mr Abhisit he will petition National Legislative Assembly president Pornpetch Wichitcholchai to bring it to the Supreme Court's Criminal Division for Holders of Political Positions in compliance with Section 236 of the constitution. The charter requires 20,000 names for the petition to be valid.

He said he plans to compile 1 million names to ensure justice is served and the dead honoured.

Weng Tojirakarn, another red-shirt leader, said yesterday many people were asking whether the NACC would live up to its promise and press ahead with legal action.

After the NACC dropped the malfeasance case against Mr Abhisit and Mr Suthep, the DSI charged them with the premeditated murder of taxi driver Pan Khamkong and Kunakorn Srisuwan, a 14-year-old boy, were among those who died during the crackdown.

The case reached the Criminal Court in August 2014. Mr Abhisit and Mr Suthep were charged with murder and attempted murder in connection with the 2010 dispersal but the case against them was dismissed.

Speaking after yesterday's ruling, Mr Abhisit said: "This case in this court is over."

He also posted a message on his Facebook page that read: "I regret the loss of life during those incidents, particularly when I could not prevent it. But I can confirm I made all-out efforts and told officials to avoid any operations that could lead to loss of life."

Mr Suthep said it was strange that he and Mr Abhisit were charged with premeditated murder as their duties were to maintain peace and order during the protest.

He said they had to face the charges as a number of people died during the crackdown but that ultimately the operation was considered a success.

"I must say that former prime minister Abhisit acted in compliance with the law. But I have no idea why he had to become a defendant in this case," he said.

"According to the law, I should be held responsible for the incident. The premier [Mr Abhisit] issued the order when I was his deputy overseeing security affairs, so it was me who had to solve the problem," he added.

Mr Suthep said he issued the crackdown order after a state of emergency had been declared.

The actions were carried out in accordance with an emergency decree that was being enforced during the time the crowd was dispersed, he added.

Each part of the operation was rigorously scrutinised and approved by a special committee tasked with deciding whether such heavy measures were needed to maintain peace and order in the nation while safeguarding the public, he went on to say.

Mr Suthep said he felt compelled to order authorities to use real bullets to protect the lives of others including security forces who were at risk of being attacked by the demonstrators.

Responding to Mr Nattawut's petition to the NACC to reopen the case, Mr Suthep said he was prepared to keep on fighting.