Yingluck’s case highlights the unsolved conflicts of Thai politics that will continue even as her whereabouts remain unknown.

When former prime minister Yingluck Shinawatra failed to show up at the Supreme Court just before the verdict of her trial for alleged malfeasance on Aug 25, it portended an uncertain fate for her Pheu Thai Party. The Shinawatras have been icons of the party, leading it to three sweeping victories over a 10-year span.

The absence of a Shinawatra could mean a poor showing for the party in the next general election scheduled for 2018.

Pheu Thai released an official statement on Tuesday, saying it will continue the mission to fight for a democratic society, improve people’s livelihoods and adhere to peaceful means.

Still, it’s hard to imagine the Thai political landscape without a Shinawatra since the nation’s political conflict at the start of the 21st century has centred around the family, with pro- and anti-Thaksin movements.

In 2001, Thaksin Shinawatra won by a landslide and implemented policies aimed at the grass roots who make up the majority of the population.

The growing influence of Thaksin in both administration and popularity raised concerns among certain sections of society, who formed the anti-Thaksin movement known as the yellow shirts, which accused Thaksin of corruption and abuse of power.

The tycoon won by another landslide in 2005’s election, only to be overthrown by a military coup a year later. Thailand was then plunged into a cycle of political crises, with the pro-Thaksin red-shirt movement organising mass protests in Bangkok in 2010.

Known for his populist policies, Thaksin gained a loyal following among the grass roots, who played a major role in his sister’s sweeping victory in 2011 in spite of her lack of experience in politics and with only a 49-day election campaign.

Ms Yingluck, too, was overthrown by a military coup in 2014 after anti-Thaksin protesters, mainly the urban middle class and southerners, occupied Bangkok’s streets for 10 months, bringing the capital to a standstill.

This has been seen as a cycle of a political struggle: pro-Shinawatra versus anti-Shinawatra, progressive versus conservative, grass roots versus middle class — always ending with military intervention.

“If Pheu Thai, if Thai politics was less dominated by the Shinawatra clan, some people attached to the Shinawatras can now take this chance to make decisions; either they want to fight the dictatorship because they believe in democracy and truly see the benefits of democracy, or they can just fight for the return of their favourite people,” says Nidhi Eoseewong, a prominent historian and political commentator.

“Pheu Thai won’t maintain the popularity it enjoyed before. But that doesn’t mean votes for Pheu Thai will decline. An election is much more than just choosing Yingluck or Thaksin. People vote for reasons that are more complex than just popularity.”

History provides a precedent. Once the Democrat Party — Thailand’s oldest political party and Pheu Thai’s key opponent — was popular among Bangkokians because of its position against dictatorship rooted in 20th-century Thai politics. When the Oct 14, 1973, uprising took place, mainly driven by students and Bangkok’s middle class, it ended over two decades of military dictatorship under Thanom Kittikachorn. The popularity of the Democrat Party has since declined.

Some journalists say Ms Yingluck’s case doesn’t only concern Pheu Thai. It may have a long-term impact on people’s thoughts too.

She may be made a new “ghost”, just like her fugitive brother Thaksin, who has haunted Thais who hate corrupt politicians and turned to support the “good rulers” of authoritarianism while devaluing democracy.

Regardless of the verdict on Sept 27 — the rescheduled date following Ms Yingluck’s no-show at the Supreme Court — her case highlights the unsolved conflicts of Thai politics that will continue even though she is suspected to have fled abroad.

Right after news of her disappearance broke, observers reacted in varied ways. Some people showed support for her, especially farmers who benefited from the rice-pledging scheme.

But there were many who assaulted her with abusive posts, using sarcasm or simply showing disappointment at her escape and a deep-rooted distrust of politicians.

Some media commentaries referred to Ms Yingluck as a “wicked politician” and blamed the Shinawatra siblings for “cheating the nation” and “selling out state sovereignty”. >>

>> The most talked about drama was raised by national artist Phaitoon Thanya, who posted a short verse, which was later pulled from his Facebook page, mocking Ms Yingluck’s failure to appear at the court with slang and spoonerisms that assaulted her sex.

“I don’t think Yingluck’s case will make people hate politicians more. Thais have hated politicians for a very long time. They don’t have faith in politicians,” says Mr Nidhi. “Politicians are regarded as parasites leeching on society, while having a moral ruler is better than having politicians.”

Making of bad images of politicians can be traced back to the 1947 coup against a civilian-led government.

Coup leader Field Marshal Phin Choohavan alleged the government failed to solve many problems including the economic slump and, ironically, corruption in the rice-control policy that caused a shortage of rice in the domestic market.

He was remembered for his tearful interview with the press, claiming that he had no choice but to “stage a coup for the people”.

Keeping her promise to supporters, Ms Yingluck launched the rice-pledging scheme immediately when her term started. Thousands of billions of baht from state coffers was spent buying rice from farmers at twice the domestic price.

Even though many farmers showed gratitude for the scheme, academics warned that it opened channels for corruption at every turn while manipulating the market without fixing the slump in the price of the grain.

But, initially, it was not the rice-pledging scheme that led her government to collapse. What doomed her administration was the controversial political amnesty bill that would have opened the door for Thaksin’s return to Thailand.

The bill drove protesters to take to the streets in August 2013, led by former Democrat MP Suthep Thaugsuban. The protest was largely supported by middle-class Bangkokians and southerners.

After the bill was suspended, protests escalated with a mission to overthrow the Yingluck government and “Thaksinocracy”. Mr Suthep claimed, ironically, that Thais were done with “bad and corrupt politicians” and demanded “reform before elections”.

Almost a year of tension amid the continuing unrest led to the military coup on May 22, 2014. The coup leader, Gen Prayut Chan-o-cha, announced the putsch was aimed at “establishing a normal situation” and “building love and solidarity of people in the nation”.

The rice-pledging scheme became the target of the military regime’s investigation.

In 2015, the National Anti-Corruption Commission (NACC) resolved unanimously to indict Ms Yingluck for failing to stop the rice-pledging scheme despite it being plagued with corruption.

This resulted in the military-appointed National Legislative Assembly banning Ms Yingluck from politics for five years, and her case was passed on to the Supreme Court.

“I am a victim of a profound political game,” she claimed in a closing statement on Aug 1. “The rice subsidy scheme was a state policy declared to parliament. Yet the charge has been brought against me alone in a criminal case,” she had previously told Reuters.

“No other government has been charged over its public policies,” she added.

In the last decade, independent organisations and the courts have played a significant role in changing the tune of the political crisis.

Eight months after the coup that overthrew Thaksin in 2006, his Thai Rak Thai Party was dissolved by the Constitutional Tribunal for violating the electoral law during that year’s election. The party’s 111 members were banned from participating in politics for five years.

In another controversial case, former prime minister and PPP leader Samak Sundaravej was forced to resign after the court ruled that he had breached the constitution by hosting four cookery shows as a paying job.

His resignation came during the peak of protests by the yellow shirts who originally demanded Samak resign as he was allegedly linked to Thaksin.

Among them was Chaturon Chaisang, a former deputy prime minister and Pheu Thai MP, out on bail after being charged for failing to report to the National Council for Peace and Order (NCPO) and sedition after appearing at a conference at the Foreign Correspondents’ Club of Thailand in 2014.

Another former Pheu Thai MP, Jatuporn Prompan, also a red-shirt leader, was handed a one-year jail term by the Supreme Court in July for defaming former prime minister Abhisit Vejjajiva in speeches he made in 2009 — despite the Court of First Instance and the Appeal Court dismissing the case.

Ex-Pheu Thai MP Watana Muangsook was recently charged with sedition after posting a Facebook invite asking people to show up at the Supreme Court in support of Ms Yingluck.

The military regime has often blamed politicians for a lack of accountability while promoting its image as a non-elected government of good people.

To curb “bad politicians”, the military government established a new political structure in its 2017 constitution that will tighten up on politicians even after the general election. This includes the government setting a 20-year National Strategy Plan that future elected governments are legally bound to follow. Moral and ethical standards for civil servants and politicians will also be set, amid controversy about their definition and implementation.

The first set of 250 senators will be non-elected. They will be recruited and selected by the NCPO, the coup successor chaired by Gen Prayut. They will have the power to investigate politicians’ budget spending and the ministers who are “not honest”.

Politicians will be placed in tightened conditions and have more chances to face legal action, reports I-Law, an organisation monitoring human rights and laws.

Some new rules are set in the constitution’s organic law for political parties, including enforcement on political parties to show budgets, sources of budgets and the worthiness of their policies promoted during election campaigns.

Meanwhile, state-independent organisation will have more power to decide the future of politicians, such as the Election Commission Committee which can call for a re-election if electoral fraud is uncovered.

The NACC, the organisation that indicted Ms Yingluck for her failure to stop the rice-pledging scheme, can deliver cases of politicians who violate ethical conduct to the Supreme Court directly instead of going through the attorney-general.

The overall political structure has been criticised for weakening political parties and politicians while strengthening the power of bureaucrats and a group of “old-face people” who want to remain in power.

“There’s an effort in the constitution to build up the accountability of political parties,” says Nutchapakorn Nummueng, I-Law’s communication officer.

“But the mechanism that lacks accountability the most is the NCPO itself. It has pushed laws that aim to take control, and appoint members of state-independent organisations and the Senate. It can be said that there are almost no checks and balances in the NCPO’s mechanism. But it enforces, with absolute power, checks and balances for political institutions.”

With new strict conditions, Mr Nidhi believes the constitution will be “torn apart”at some point because the established political structure does not fit the present context and creates conflicts. Torn apart by whom? He does not know.

He believes political parties must plan for their roles when the constitution has gone. So must Pheu Thai, with or without the Shinawatra clan. 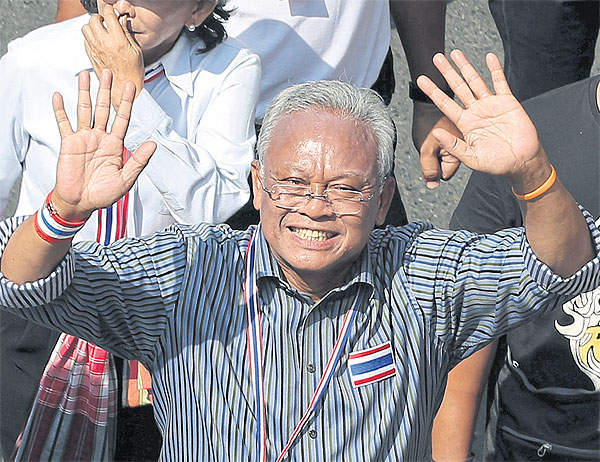