Eight years after the purchase, a week after decommissioning. the Office of the Attorney General vows to "look into" the army's dirigible fiasco. Bottom left: Generals Prayut, Prawit and Anupong, all involved in the history of the blimp. (File photos)

Auditor-General Pisit Leelavachiropas has vowed to scrutinise the army's controversial 340-million-baht aerial patrol project, which included the purchase of a rarely-used airship.

The blimp, which went into service in 2009, was decommissioned only eight years later.

This has stoked calls for a malfeasance probe into the project.

The Office of the Attorney-General (OAG) would step in to conduct a review of the project, Mr Pisit told the Isra News Agency.

The airship's past performance will be assessed to find out whether it was worth spending national funds to buy it in the first place, and if something irregular is detected, various organisations will be contacted to investigate further, according to Mr Pisit.

"It's a matter for the OAG to consider and the project's assessment must go ahead," said Mr Pisit. "The OAG inspectors should follow up on the case and gather information and evidence about it," he added.

Meanwhile, Srisuwan Janya, secretary-general of the Association to Protect the Thai Constitution, said he will petition the OAG Monday to probe the case.

If irregularities are found, the OAG must forward its findings to the National Anti-Corruption Commission (NACC) to punish Interior Minister Anupong Paojinda, the man who approved the purchase of the blimp when he was the army chief, Mr Srisuwan said. 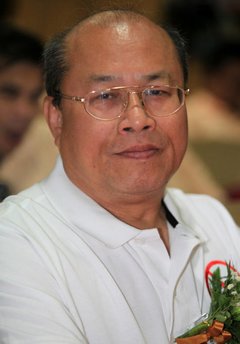 The investigation needs to find out whether Gen Anupong used his power in line with relevant laws, he noted.

The activist said little was heard about the worthiness of the airship, which was commissioned to monitor the movements of southern insurgents, over the course of its eight years in service.

As it appears that the blimp was unable to perform its duty in line with the army's objectives, it should be regarded as ineffective military hardware, he said.

Taxpayer's money was used for the purchase, so someone must take responsibility, he noted.

Responding to the OAG's pledge to probe the project, acting Pheu Thai deputy spokesman Jirayu Huangsap said the investigation needs to find out why, during the warranty period, the blimp's importer was not asked to fix the vessel when faults developed.

The army just let the time pass before seeking a maintenance budget after the warranty had expired, he alleged.

On Friday, Gen Anupong came out in defence of the army patrol project, explaining the airship itself cost well under 100 million baht, and other systems, including cameras, are still usable and have been removed to equip helicopters.

He also said he would not object to a malfeasance probe to clear any lingering doubts about the project and counter any inaccurate information.

The airship went into service in 2009, when Gen Anupong served as army chief and Gen Prawit Wongsuwon was defence minister.

Leaks were detected in the airship, and since refilling with helium is costly, the airship was mainly kept in a hangar at the 15th Infantry Division in Pattani's Nong Chik district.

The army reportedly spent up to 25 million baht refilling the airship with helium, even though it was almost never used.