The Chartthaipattana Party is throwing its weight behind Prime Minister Prayut Chan-o-cha to continue running the country for the next 10 years, on the condition he helps boost people's incomes.

Chartthaipattana was formerly known as the Chart Thai Party.

Former deputy party leader Prapat Pothasuthon voiced his support for the idea Monday, as he and other key party figures greeted Gen Prayut on his visit to the Thailand Rice Science Institute in Muang district of Suphan Buri, the stronghold of Chartthaipattana, Monday. 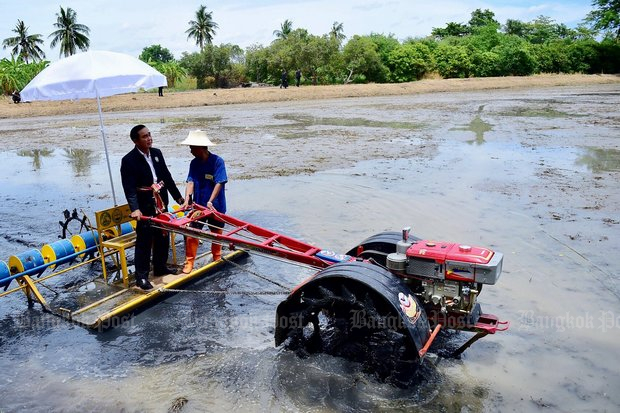 Prime Miniser Prayut Chan-o-cha had a photo op on a rice-seeding machine Monday at Suphan Buri's Thailand Rice Science Institute. He held a mobile cabinet meeting, but was greeted by key politicians of the Chartthaipattana Party, which dominates the province, and got his first political-party endorsement to stay in office indefinitely. (Photo via Twitter/@wassanananuam) 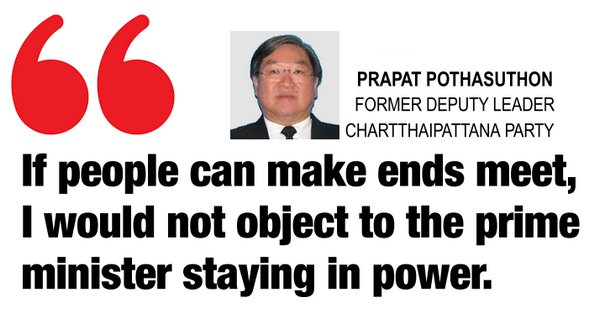 Other political parties, however, have interpreted Chartthaipattana's move as playing it safe, saying the the party does not want to be seen as an opponent to anyone so it has the option to join the next coalition government whichever side wins.

Gen Prayut was on a two-day trip for a mobile cabinet meeting in two central provinces of Suphan Buri and Ayutthaya, which will wrap up today.

"A hasty election would not be useful as the [political] wrangling is still going on. If an election takes place now, verbal attacks will ensue," said Mr Prapat, a former minister of agriculture and cooperatives.

"Today, we just want the government to draw up parts of a high-speed train project budget to help farmers. If people can make ends meet, I would not object to the prime minister staying in power for the next eight to 10 years," the key party figure noted.

Varawut Silpa-archa, the son of the late party leader, Banharn, said his party members are focusing on the livelihoods of people in the province, particularly farmers, and if the government comes up with any policies to help growers, the party would be ready to accept it.

"As for the election, the decision rests with the prime minister. We are only waiting to contest it," said Mr Varawut, who is tipped to serve as the next party leader.

In response to the backing of Chartthaipattana members, Gen Prayut said: "We must not get into conflicts again. We must move forward."

Regarding corruption cases against politicians, he said: "Whether they are right or wrong depends on the [justice] process. I will not invoke Section 44 to issue judgements."

The premier also told the politicians that the regime is implementing tougher rules for future administrations.

"I want everyone to play by the rules. Please do not make me another player. I now only serve as a referee trying to ensure everything is in order," Gen Prayut said.

He insisted he is ready to meet good politicians from every party, but the talks must involve useful issues and nothing that can lead to conflicts.

Mr Abhisit said Gen Prayut must spell out exactly how the situation will be solved.

Responding to comments by Gen Prayut about the election being held late next year if there are no legal hitches, Mr Abhisit said the prime minister should have asserted he would ensure there would be no problems leading up to the election.

The prime minister must set the exact election date for Thais first before saying anything to his US counterpart if he visits the United States, added Mr Abhisit.

Commenting on Chartthaipattana Party politicians throwing their support behind Gen Prayut staying on in power, Democrat deputy leader Satit Pitudecha said the results of the election would paint a clearer picture as to which direction Chartthaipattana would go.

Mr Satit insisted his party would support Mr Abhisit to become prime minister in the poll.

He said the Democrat Party did not believe the incumbent administration's performance had satisfied the people and that the administration must make it clear when the election will be held as it would boost public confidence.

Responding to Mr Vorawut's comments which appeared to carry favour with Gen Prayut, Samart Kaewmeechai, former deputy House speaker from Pheu Thai Party, said they could simply be interpreted as the province's host welcoming the prime minister who was visiting his area.

Those listening, he said, may have interpreted this as supporting the continued premiership of Gen Prayut.

"I think it is still premature to make such judgements," said Mr Samart, who is a former Chiang Rai MP.

"We still do not know what the party's policies will be following the death of Banharn."

He said it is possible that the Chartthaipattana Party is trying to keep its options open to secure a place in a coalition government.

Mr Samart stressed Pheu Thai is ready to form a government if it receives a majority vote and would serve as the main opposition party if that doesn't happen.

"If attempts are made to force us to proceed with an undemocratic approach by supporting someone who has not entered the election process [to become the prime minister], we will not do so. We will not support an outsider prime minister for sure," Mr Samart added.

'It is not the time'