'Prayut 5' on deck after Sirichai resigns

'Prayut Government 5' is coming, with the prime minister about to fire some of his men in uniform and bring in civilian ministers to replace them.

The resignation of Labour Minister Sirichai Distakul will likely pave the way for a major cabinet reshuffle, with the number of military top brass expected to fall and more civilians to take over ministerial posts.

The top brass in the armed forces and the National Council for Peace and Order (NCPO) have occupied the majority of cabinet portfolios following Gen Prayut's four cabinet shakeups so far.

This time, attention will centre on how many military top brass occupying ministerial posts will be ousted and how many civilians will march into the next cabinet.

Gen Prayut is now confronted with the question of whether he plans to remove some of the military officers from the cabinet. 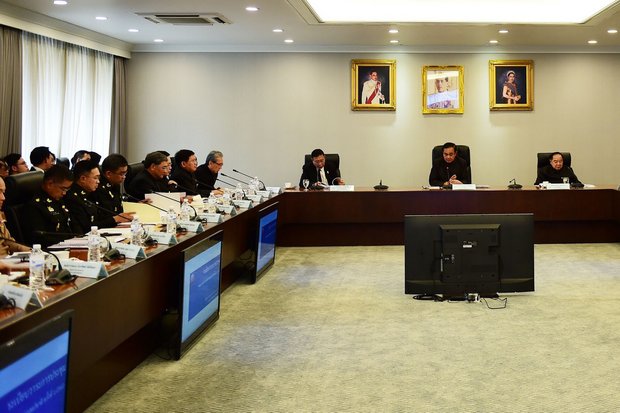 According to a Prime Minister's Office announcement published in the Royal Gazette Thursday, Gen Sirichai tendered his resignation on Wednesday, effective immediately.

A government source said rumours circulated for some time that the prime minister was unhappy with Gen Sirichai's performance as labour minister.

He was among ministers expected to be removed from the cabinet whenever speculation of cabinet reshuffles emerged.

The minister's resignation was widely anticipated on Wednesday, after Prime Minister Prayut suddenly transferred Varanon Peetiwan, director-general of the Employment Department, to the post of deputy permanent-secretary for labour.

The transfer was ordered in Gen Prayut's capacity as chief of the NCPO.

It preceded the abrupt resignation of Gen Charoen Nopsuwan, vice-minister of labour, on the same day.

On Wednesday Gen Sirichai had a 10-minute meeting with Gen Prayut at Government House, but Gen Prayut said he was not given a resignation letter.

Deputy Prime Minister Prawit Wongsuwon, who is also the defence minister, said the labour minister's resignation did not mean there was a rift within the cabinet.

"It was a personal decision, and Gen Sirichai had not informed me in advance," Gen Prawit said.

Although he supervises the Labour Ministry as deputy prime minister, Gen Prawit said he would not propose a successor for Gen Sirichai. He said Gen Prayut would decide that.

Gen Prawit said fewer military officers would remain after the next reshuffle.

This is because the military top brass in previous cabinets had contributed to solving many of the country's problems and laid foundations for the government during the past three years, Gen Prawit said. He ruled out the possibility of any portfolio changes at the Defence Ministry.

Gen Prayut said Thursday that the labour minister's resignation had nothing to do with his decision to use Section 44 to transfer the director-general of the Employment Department.

The premier said that Gen Sirichai resigned to attend to private business. Work at the ministry would not be disrupted, Gen Prayut said, because he was supervising all the ministries.

Asked about Gen Prawit's comment on a possible reduction in the number of military top brass in the next cabinet lineup, Gen Prayut said he was considering the matter.

As for the [possibility of a cabinet reshuffle this year, Gen Prayut only said: "Perhaps. Don't take too much interest in it. It's a matter of management."

A government source said rumours were circulating in September that the government and the NCPO planned to shake off the regime's "junta" image by reducing the number of senior military officers in the cabinet.

In the next cabinet lineup, the military will only be given ministerial posts relating to security matters, such as the defence and interior portfolios, the source said.

The source also said that Gen Prawit is expected to keep his defence portfolio in the next cabinet shakeup because a defence minister should be a widely respected military officer.

According to the source the next cabinet, which will be the fifth potentially and last if a general election is held as suggested in November 2018, is important as it will have the task of supervising the poll and handling the post-election situation.

In the event the election is delayed further, Gen Prayut's new cabinet will stay on as an interim government.

It this is the case, a greater number of civilians and fewer military officers will be necessary to gain recognition for the lineup, the source said.

In response to questions about the next cabinet reshuffle, Deputy Defence Minister Udomdej Sitabutr said Thursday that no one had approached him to become the new labour minister.

Deputy Prime Minister Wissanu Krea-ngam said Mr Varanon was transferred to the post of deputy permanent-secretary because there were problems which needed to be solved urgently and Mr Varanon was best suited to this task.

This may be useful in investigating why Mr Varanon was transferred, Mr Anusorn said.

Mr Varanon said he has not been involved in any bribery and had no idea why he was given the axe.

Gen Charoen stepped down as the labour vice-minister following allegations of kickbacks paid to labour officials in the registration of migrant workers, an issue thought to be behind Section 44 being invoked to remove the chief of the Employment Department.

Copies of the letter dated Wednesday were distributed to officials at the Labour Ministry.

A source at the Labour Ministry said Gen Charoen, who served as vice-minister for two years and two months, was considered the right-hand man and a long-time ally of Gen Sirichai, who is a former defence permanent secretary with close ties to Gen Prawit.